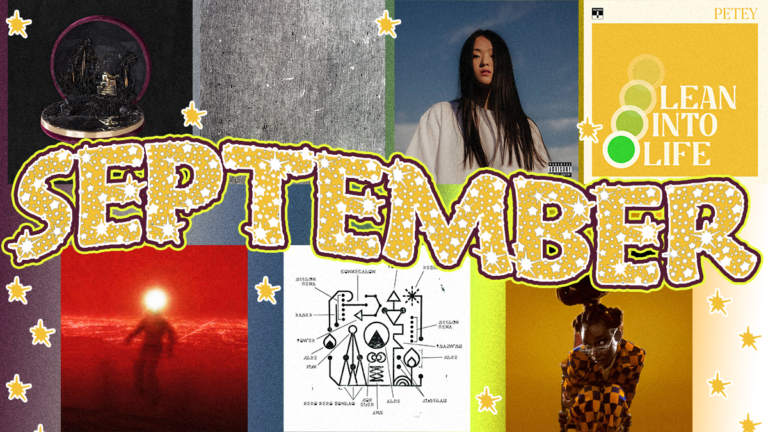 The term ‘album’ falls short of adequately describing the beast that is Moor Mother’s Black Encyclopedia of the Air. More appropriately, it is poetry, performance, and sound art expertly woven into a collection of pieces that are as diverse as they are succinct. While all sounding ‘wet’ in essence, with a perceptible fluidity of effervescent noise, the songs range in composition from jazzier and traditionally structured to winding experimentation that could double as ambient overlaid with intense spoken word poetry. Lyrically, the album centers around black identity, though takes a decidedly less straightforward approach to the politics that surround it. The messaging of each song feels soulful and spiritual, rather than fiery, or rigid in its politics. On songs such as “Tarot”, with instrumentation that includes ethereal pipes as well as natural sounds of wind chimes and the rustling of leaves, we are offered a look into a sense of power stored in the trauma of generations. This sentiment of a deeply rooted power is foreshadowed on the opener, “Temporal Control of Light Echoes”, where Moor Mother talks of monsters, gods, and carrying “my mother, your mother, her mother / The mothеr in my womb.” Perhaps the richness of the album lies then in this penetrating power, down through generations, cutting through the noise, flowing as the interstitial fluid within the living breathing organism that is this record.

For years, Low has made a name for themselves by sticking to the quieter side of indie rock. On HEY WHAT, the duo breaks for the opposite realm of the sound barrier, yet still retains the simplistic sensibilities and folk influences that have remained since the beginning. When “White Horses” begins to stutter with static, it’s difficult to believe that this is even the same Low renowned in 90s slowcore. And yet, as soon as Sparhawk and Parker begin to harmonize, the message in the static reveals itself. Coming hot off the heels of Double Negative, in which the electronics and noise threaten to subsume the group’s fragile melody, HEY WHAT is a sharp rebuke of the desire to simply live quietly and hope the storm passes overhead with little damage. No matter how loud the droning becomes, Low’s vocals are stronger, re-affirming the humanity beneath. Nowhere is this shown to greater effect than the far-too-short “More” in which the feedback sounds as if it’s struggling to get free until those angelic voices come back in and wrangle it to a point where it doesn’t sound frightening anymore. In “Hey,” the whirring drones sound just like the storms that appear over great lakes and plains alike, but instead of a fearsome phenomenon, it’s almost comforting in its size. And, in what might be the best track of the album “Days Like These” where Sparhawk and Parker’s vocals are modulated into the drift, the country twang is only accentuated, lending emotion and passion to the message of striving for meaning in times that feel only more apocalyptic by the day. Low may not have the answers to these questions. But what they do have is the drive and motivation to inspire, to fight back against apathy and negligence with the determination that is inherent to the human condition.

Injury Reserve – By The Time I Get to Phoenix

On the newest album from Injury Reserve, rapper Ritchie with a T and producer Parker Corey carve out a new lane for themselves in experimental hip hop, as they grapple with the passing of founding member Stepa J Groggs. The results are unlike anything the group, or any other artist for that matter, have made before. From the confrontational opening track, they make it clear what the listener is in for–Ritchie strikes a battle rap stance over enveloping synth lines with a verse that verges on mad rambling in the best way possible. The second track and single, “Superman That” is more somber in tone–with heavily autotuned repetition of the words “Ain’t no saving me or you.” The beat here, as on most tracks that follow, is absolutely unhinged–shuffling drums and melodic lines that are as melancholy as they are groovy. Ritchie’s voice is more sultry and weathered than ever and often appears in ad-libbed grunts and moans in layers, ensuring each track is imbued with a sense of controlled chaos. On “Top Picks For You”, however, Ritchie pens his most direct verse to the late band member over a drumless beat –a poignant meditation on seeing Groggs’ recommended content on a streaming platform. Injury Reserve has always incorporated an interest in technology into their music, and this song places this theme in its saddest context. The first single, “Knees” is a beautifully heartswelling sendoff to the album before its final closing track, and contains one of the two Stepa J Groggs verses on the album–a patiently thoughtful meditation on growth. By The Time I Get to Houston signals an end of one era for Injury Reserve, and the start of a beautiful new one.

Petey’s fusion of synths and sarcastic, shouted lyrics on Lean Into Life guide the audience through subject matter ranging from mental illness to relationships. Synths, drums, and electric guitar establish the foundation for “California” creating an upbeat song with tinges of dark humor in the lyrics. “Apple TV Remote” is the first track to feature the hoarse scream-like vocal effects found throughout this album. “Pitch A Fit!” combines these raw vocal effects and smooth melodic lines overlayed upon the electronic instrumental lines. Possibly the highlight of the entire album, “DON’T TELL THE BOYS” is an emotionally driven song with turbulent drums and fast-paced synths contrasted by the mellow, heart ache inducing chordal sections. Petey’s ability to tell a story shines on “Microwave Dinner” by matching the intensity of a quarter-life crisis with panic-riddled vocals. Much like earlier tracks, “Lean Into Life” has a heavy synth-pop sound with retro vibes forming an energetic song. The album ends with “Tell the Boys” which is an instrumental track with hymnal synths emulating a heartbeat leaving the listener in a state of peace. With synth-pop elements and cathartic vocal delivery, listeners are sure to find a song that speaks to them on Lean Into Life.

Japanese-British indie-pop group Kero Kero Bonito combines their two latest EPs, Civilization I and II, into one funky 7-track compilation album, perfect for feeling like the main character of a flop 80s movie with a cult following, and I mean that in the best way possible. The opening track, “Battle Lines”, shows us that although K.K.B. dabbles in retro synthpop, their signature quirky lyrical and vocal style is as present as ever. This arcade-like tune is followed by two more 80s inspired tracks, “When The Fires Come” and “The River”, before introducing us to the second part of this album: the Civilization II tracks. After the mystical and almost ethereal interlude, the album transitions into Kero Kero Bonito’s signature indie-synth style of instrumentals. The last three songs, especially “21/04/20”, could have fit perfectly in the group’s previous full-length album, Time ‘N’ Place. Nevertheless, the tracks stand out more as a 3-song EP (or in this case, a 7-song compilation), and they’re easier to appreciate, creating a relaxed mood that can only be felt with these songs. Although Civilization is simply a compilation of two EPs glued together with a minute-long interlude, the tracks in each project complement each other perfectly and give us something to listen to while we wait for K.K.B’s next full album.

On her most recent release, Little Simz struts a delicate balance between graceful orchestration and beat-heavy synths, as well as the boundary between intimacy and power. On the opener, “Introvert”, the instrumentation would suggest anything but the timidness of an introvert. Rather, it boasts powerful horns and strings that could soundtrack an oncoming war. The posturing of the first song, quickly fades into suppler, jazz-infused raps on the next couple of tracks that explore womanhood and personal aspirations, as well as Simz’s Nigerian cultural background. Much of the album luxuriates in smooth orchestration and jazz samples, but let it be known there are still certainly songs that veer into edgier spaces. A song like “Speed” features potent, bass-y drums and sizzling synths, all of which feel very reminiscent of the funky, off-kilter beats featured on many Gorillaz tracks. In all, with its 19 tracks and just over an hour-long run-time, Sometimes I Might Be Introvert feels both groovy and whimsical, introspective and proud, and above all, gracefully artistic.

Park Hye Jin – Before I Die

There’s a trend that’s very common among electronic musicians, intentional or not: the dehumanization of the human voice. Whether it’s through such techniques as pitch-shifting, chopping up syllables, or just rendering it unintelligible, losing that aspect of humanity can allow the soundscape being created to affect the listener more intently. On Park Hye Jin’s latest album Before I Die, the 26-year old Korean-American can convey this uncanny valley of the voice with almost no technical wizardry: it’s all in the delivery. Nowhere is this put to more chilling use than in the titular track of the album. Over a repetitive beat that brings a ticking clock to mind, Park intones a litany of sorts, “I miss my mom, I miss my dad, I miss my sister, I miss my brother.” The delivery is so deadpan as to sound genuinely emotionless, the result of separation from loved ones and family. This is a pattern throughout the album. By using the power of repetition, she creates a sense of continuity, that, instead of being comforting becomes almost clinical. This makes the descent into near-chaos in the second half of the album more surprising. The beats are stumbling over each other, becoming ever darker, as Hye Jin’s voice stays, as always, unchanging and impervious. In “Hey, Hey, Hey” a thudding techno beat underpins the track as she simply repeats the title.. In “Sex With Me (DEFG)” her desire to form a relationship is reduced to the most primal and loveless form over a deep house backing. And, just like life, there’s not always a resolution. The ending song, “i jus wanna be happy” simply … ends. There’s no grand realization, no emotional reckoning. And for an album like this, there’s not a more fitting ending.