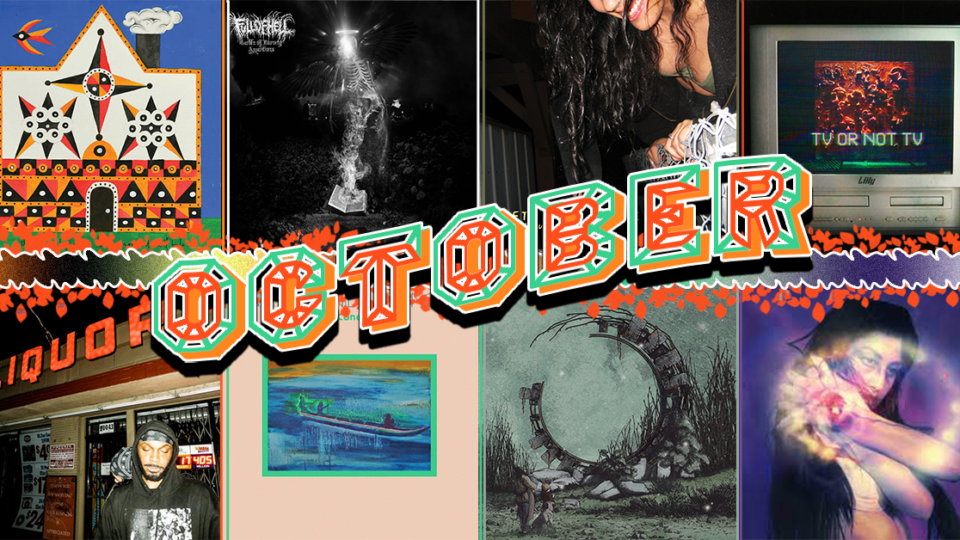 The Body & BIG|BRAVE – Leaving None But Small Birds

The Body and BIG|BRAVE have each earned their tenure in metal, but together they have created an album that defies any preconceived notions one might have had for them. On Leaving None But Small Birds, both bands veer into a brand of folk rock that is rife with an eerie grit. Twangy layered strings mesh with the heavy distortion of guitars that both The Body and BIG|BRAVE are known for, creating a delicate and foreboding atmosphere. Similarly, the guttural shrieks and growls of The Body are replaced by the haunting croons of BIG|BRAVE’s lead vocalist Robin Wattie, which runs on the verge of breaking at points and sounds seductively resilient in others. Even in the quieter moments on the record where instrumentation pulls back–as on “Black is the Colour”–there is still a great deal of texture to be found in the weaving vocals and thudding, droning rhythm of the work. While certainly not a traditional metal release, Leaving None But Small Birds retains some hints of its creators’ metal influences and proves the genre as an incredibly versatile one.

Illuminati Hotties – Let Me Do One More

From atop Illuminati Hotquarters, singer/songwriter Sarah Tudzin pens tunes to capture the last gasps of a dying Summer on Let Me Do One More. The band’s variety of sounds range from catchy pop-infused punk to endearingly sincere folk and beyond. The opener, “Pool Hopping” features a suave, yet energized guitar lead, as Tudzin navigates a complicated love-on-the-rocks situation in her signature ultra-charismatic vocal performance—emotional turmoil has never sounded so fun. “u v v p,” on the other hand, finds the songwriter taking a regretful tone over a tried-and-true folk rock chord progression, complete with steel pedal and a spoken word passage from Buck Meek of Big Thief. It’s a melody sure to put a tear in many a beer. For fans of punk rippers, there’s plenty here. “MMMOOOAAAAAYAYA” hones the chaotic energy showcased on Free IH into one of the wildest jams of the year. Though the lyrics throughout the album are consistently wittily funny or throat-punchingly pensive, Tudzin is at the top of her game here, juxtaposing lines, “Text me, touch me, call me daddy / I’m so sad I can’t do laundry.” On “Joni: LA’s No. 1 Health Goth”, the band takes on hardcore punk, as Tudzin describes a character of such abundant scene credit that her status is unachievable—perhaps vapid in her devotion to trendiness, but impossibly cool regardless: “you wish you were like her.” Let Me Do One More has some of Illuminati Hotties’ best-written songs, blending the band’s many unique styles in a masterclass of growth.

Priestess captures the deep, rhythmic percussiveness of the hyperpop genre in combination with clear and emotive vocals. The album opener “Sell My Soul 2 U” sets the stage for the rest of the album. The contrast of angelic vocal harmonies floating on top of spacey, sporadic synths instantly grabs the listener’s attention. The repeated percussive line on “Is It Love or a Pyramid Scheme” paired with the uncomplicated chorus makes the song earworm worthy. Admittedly the lyrics of “Spit in Yo Mouth” are slightly obscured even to the most experimental-learnéd listeners, but by adding in the staccato drums and oscillating vocals, the song becomes fun and dance-y. Beyond the upbeat, techno sound of the album, Priestess features acoustic and melodically driven songs. “Afterglowow” has mellower electronic rhythms, and the foreground is Yullola’s beautifully clear voice and introspective lyrics. Perhaps the most lyrically-driven song on the album, “Bb Plz Don’t Go” leaves room for Yullola’s somber yet passionate vocal performance by stripping down the rhythmic section. Wrapping up the album is “Ur Not My Type Ur Just Some Type of Way” with the piano’s direct presence paving the way for the vocal line to experiment with layering and ornamentation. Overall, Priestess highlights Yullola’s vocal clarity and passion alongside intricate techno beats.

On LP!, JPEGMAFIA follows a formula and sound similar to that of his previous albums and manages to sacrifice no quality in doing so. The experimental hip hop titan revives his distinctive, engaging, and humorous attitude and delivers yet another project full of heart, intelligence, and musical brilliance. On the two versions of this album–the Bandcamp version has songs uncleared for streaming and is thought to be the truest form of the record–Peggy showcases his signature production style. While this project is not as outlandishly abrasive as some of his previous projects, the beats ride a satisfying line between original, creative, and fresh-sounding while not being so flashy as to get in their own way. Peggy combines these sounds with his ever-charismatic and in-your-face lyrics and delivery. On a track like “DIRTY!”, he addresses social issues with sarcastic and amusing bars that engage the listener and paint an image of the artist as one who is serious about his craft and worldviews, but does not take himself too seriously. With this album, JPEGMAFIA furthers his case to be considered as not just one of the best experimental hip hop artists, but one of the best hip hop artists in the game.

Liily – TV or Not TV

The band Liily carved out a space for themselves in the alternative rock scene with their 2018 single “Toro ”, but on their latest album TV or Not TV the band amps up their musical ambitions and presence. No longer just meddling in the realm of alternative rock, the Californian quartet seems to dip their toes into the sounds of post-punk revivalism that has become increasingly popular throughout the 2010s via bands like Squid, IDLES, and their American contemporaries, Protomartyr. In a similar stride, Liily employs a fiery attitude and decisive force on a tracklist that feels at times both compulsively restrained and unhinged. The vocal performance on songs such as the opener, “Mr. Speaker Gets The Word” deviates between a strict monotone delivery to one that unfurls the tension that the instruments build relentlessly. The band also employs an occasional burst of horns, exceptionally discordant, squawking guitars, and notably groovy basslines that keep the atmosphere of the album incredibly light and danceable. As their first full-length release, Liily’s TV or Not TV proves the band is not merely a one-hit-wonder, but has a promising future in post-punk and alternative rock spheres.

As the days get shorter and the temperature plummets, every music review site is already pulling out those “comfy albums to cozy up to while wrapped in a blanket” faster than you can say “Daylight’s Saving Time”. Allow me, then, to be a contrarian, and offer up an album that rejects the slightest hint of frost and freeze. Almas Conectadas, the collaborative effort between Quantic, an NYC-based producer, and Nidia Góngora, a singer/songwriter from the Colombian coast, offers up a scintillating Afro-Caribbean experience that is sure to chase away any wintertime blues. From the very beginning, rhythm is the name of the game here. The drums, the strings, the horns, and, of course, the vocals all combine to form an unstoppable groove that, while not always danceable, is nonetheless hypnotic. And that’s where the beauty in this album comes in. To some, Latin music starts and stops at the dance-pop that controls the airwaves over here in the US, but to Góngora and Quantic, the true beauty of traditional music is all the emotions that are contained within, not just joy, but melancholy and sadness as well. Góngora carries this album, both musically and emotionally. On my personal favorite, “El Chiclan,” her voice slides seamlessly through the tropical percussion and background vocals, sounding both triumphant and mournful at the same time. On the closing track. “Vuelve”, most of the rhythm is stripped back to piano and woodwind, and Góngora’s melodies glisten in the relative silence left behind. But, the most important aspect here stays true throughout. This record is sun-drenched, wistful, and pensive without ever sounding depressive or cold. And to me, there’s no better way to wait out the cold than putting this album on, and pretending I’m somewhere else, if only for an hour or so.

The world of Dark Souls is not one that can be saved. It conjures an interminable dread at the end of times that, for some curious reason, in this age of stagnant workers’ wages and rule by corporate interest, has captured the imaginations of millions. With this new album’s multiple references to the series, some members of The World is a Beautiful Place & I Am No Longer Afraid to Die also seem to be among the affected. On Illusory Walls, the band takes on the haze of shoegaze to texture their traditional emo sound and further communicate this sense of doom. Synths and orchestral strings added to the mix make for the band’s most sonically ambitious work to date. Lyrics surround themes of loss and hopelessness. On the opener, “Afraid to Die”, singer David Bello begins by giving intention to the theme of eternity, singing over soft guitar, “This is where we live and this is where we stay forever.” Keyboardist and vocalist Katie Dvorak takes the reigns as lead vocalist on many songs to fantastic results, such as what may be the catchiest song on the record, “Queen Sophie for President”, a tribute to her late grandmother. “Blank // Worker” is a nearly ambient piece, above which Bello tells a story of his childhood–a spill in Parkersburg, between Ohio and West Virginia, where DuPont knowingly dumped carcinogenic chemicals into the local water supply. The final two songs, “Infinite Josh” and “Fewer Afraid,” which each blow past the 10-minute mark are some of the greatest highlights on the record. Far from overly indulgent, they manage to leave the listener with a sense of hope: “The world is a beautiful place, but we have to make it that way / Whenever you find home, we’ll make it more than just a shelter / If everyone belongs there, it will hold us all together / If you’re afraid to die, then so am I.” Illusory Walls is the band’s strongest and most impacting work in years.

One of many impressive metal releases this month, Full of Hell continues to show how dynamic their brand of grindcore and power metal can be on Garden of Burning Apparitions. The band has always been one owing itself to evolution and diversification, as is evident in their collaborations with electronic-leaning artists such as HEALTH. It seems that on this latest release they have incorporated some of the ethos of their former collaborators to create a sound that is even more glitchy and experimental than any of their past work. On tracks such as “Derelict Satellite” the band devolves into full-blown bouts of noise and ear shredding static that shows their new interest in experimental and electronic glitch. Conversely, the album also shows a more melodic side of the band, as on “Celestial Hierarchy”, which offers a slight moment for breath in a tracklist that barely exceeds twenty minutes. While the run time is short, Garden of Burning Apparitions manages to merge the genres of power metal, grindcore, experimental, and glitch to entrap their listeners in a whirl of sound sure to keep them hungry for more.