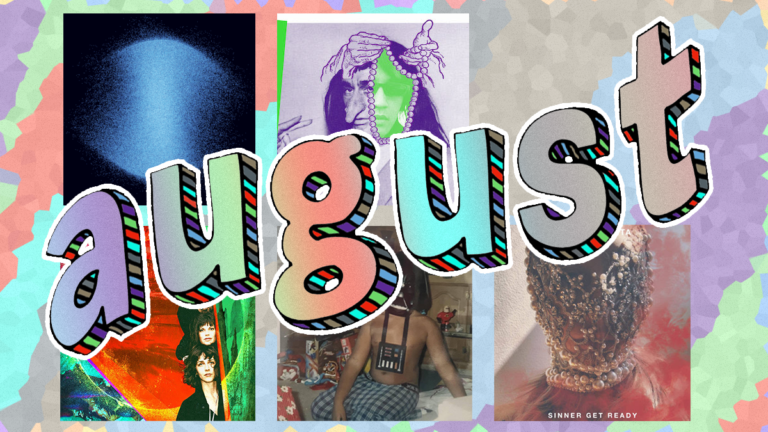 Aussie noise rock band Tropical Fuck Storm’s third album, Deep States, is as messy and disorienting as the doomed political landscape it was birthed out of. Reflecting mind-poisoning social media discourse twisted through the filter of a distortion pedal, vocalists Gareth Liddiard and Fiona Kitschin deliver some of their most compelling melodies over lacerating guitar and synth lines. The opening track, “The Greatest Story Ever Told”, writes from the perspective of Jesus’ second coming to Earth to proclaim in a grand chorus “There ain’t no end of days.” Even at its loudest, a sense of unending weariness may be what holds the album together most cohesively. This is remarked on in the most detail by Liddiard on the second track, “G.A.F.F”–or ‘Give a Fuck Fatigue’–the result of constant news bombardment of tragedies which people have no immediate means of challenging. A softer moment, “New Romeo Agent”, is one of TFS’ most stunningly somber songs–rivaled only by the penultimate track “Legal Ghost”. Over a shuffling beat, Kitschin recounts a suicide mission–hope in the face of adversity–and ultimately, failure. The gorgeously ambient “The Confinement of the Quarks”, does give some reprieve after what has been something of a downer album. It’s an odd one next to the rest of their catalog, but given the circumstances, this feels like the only album Tropical Fuck Storm could have sincerely released, and it’s excellent.

In many ways, the essence of Lingua Ignota’s music has always been the harrowing balance between beauty and an uncomfortably human ugliness which, on previous releases, has exhibited itself in a fervorously operatic cacophony of expertly constructed noise. Simply put, she does not hold back for anyone. On 2019’s CALIGULA, Lingua Ignota tackles intense themes of abuse in her unapologetically spiteful and searing lyrics that at times morph into agonizing howls and shrieks. Simultaneously, she weaves delicate piano playing and thunderous walls of noise that further imagines the sort of divine hell one might find themselves in as they are destroyed by someone’s “love”. A similar theme runs through her 2021 release SINNER GET READY, though this time it is aimed at religious trauma which she explores both lyrically and instrumentally. Lingua Ignota has always incorporated a regal and grandiose instrumental palette, but SINNER GET READY shows a slightly softer side to her work with elements of religious hymns and neofolk. Yet, despite drawing back a bit from her more abrasive tendencies, she still maintains the same level of harrowing torture and anguish that permeates her work. Instead of throat-shredding shrieks, Lingua Ignota allows subtle expressions of defeat to shine through in the quieting or breaking of her voice; Heavy static and feedback distortion hold back to allow strings and piano to carry the weight of her despair. Overall, SINNER GET READY is no less soul-crushing than her previous releases, but shows an incredible level of artistry in crafting such a doleful, heavy presence with quiet grace.

It’s a wonder what a difference a decade makes. Deafheaven arrived in the music scene like a devil disguised as an angel. Their chiming guitars swirled upwards into the heavens while lead vocalist George Clarke’s growls were buried underneath, a constant reminder of the emotional turmoil bubbling below the surface. Infinite Granite does a complete 180 on this sound that made Deafheaven such a critical darling, and while some might find the new scene a disservice to their black metal roots, I think it’s this album that launches them into the upper echelons of shoegaze canon. The 90s influence is strong here, as almost every classic gaze band’s influence can be heard throughout the album. But instead of wallowing in mere mimicry, Deafheaven destroys the lethargy that plagues so much of shoegaze and gives it a swift dose of adrenaline instead. This can be heard as soon as the one-two punches of “In Blur” and “Great Mass of Color” begin. The guitars are crunching, the drums are going absolutely crazy, and the waves of noise threaten to suffocate anything in their path.  Clarke’s vocals pierce through the layers of haze, their cleaner sound intensifying the feeling of hopefulness that punctuates the entire record. While the growls do make appearances from time to time, “Villain” especially, they’re more buried in the background, defeated by the soaring atmosphere surrounding them. Hell, “Neptune Raining Diamonds” has no vocals at all, but the feeling and passion are still there. This album is a tribute to the years Deafheaven spent mired in malice and despair. The music is still emotionally charged but instead of feeling trapped within the sound, Infinite Granite offers a light at the end of a tunnel.

Idris Vicuña of Eyedress creates 15 tracks experimenting with different styles, production, and subject matter on Mulholland Drive. The combination of Vicuña’s vocal talent and the musicians’ skills generates a cohesively meshed album. Mulholland Drive has a typical Eyedress feel with hazy vocals, a simple drum line, and accentuated synth. “Midnight on a Sunny Day” is the first song on the album that establishes Eyedress’ collaborative spirit, with a guest list including the likes of Bee Eyes, Vex Ruffing, and Paul Cherry. “Something About You” has clearer vocals with an ear worm-inducing chorus. A groovy, upbeat sound is found on “Long Nights at the 711” while “Ride or Die” has a sultry jazz sound. The grunge, alt-rock genre makes an appearance on “Spit on Your Grave” with croaking vocals, fast-paced drums, and discordant guitars. The heavy subject matter on “Body Dysmorphia” is beautifully contrasted by the guitar taking over the melodic line in the chorus creating an uplifting sound. It wouldn’t be an Eyedress album without the muted strumming of the guitar as featured on “Want You There Tomorrow.” Album closer “Prada” has a vibrantly rhythmic beat. Overall, the album experiments with different styles and production elements while covering basic themes of everyday life from extreme societal standards to the comforts of family.

On Pink Navel’s newest album, the rapper and producer sets out with the lofty goals of reclaiming the word “epic” from the clutches of internet irony. The manner in which it was recorded is appropriate considering this intention–being entirely produced live in one seamlessly contiguous performance on their Twitch channel. Sonically, it resembles the experience of standing just next to the speaker at a live show–a buzz in the timbre of each sound that can only be captured in this setting. In an energetically animated delivery, they rap references to cartoons and intersecting music scenes with unwavering positivity. On “DANNY PHANTOM”, their perception of where they stand in hip hop is clear: “I’m the funny friends’ side character’s ghost dad / Shit, and I own that, when I get up on there and just giggle you are so mad / Like it’s problem officer, but you are lacking gonads.” These verses stitched together with auditory pieces of web culture create a collage of self-assurance and pride in identity. “I am the only rapper who knows Ze Frank”, they proclaim on “ZE FRANK”, and they also, to my knowledge, are the only rapper to sample an Angel Mamii Tik Tok. What is most apparent after a listen to EPIC is how much fun Pink Navel had recording it–and this fun is infectious.