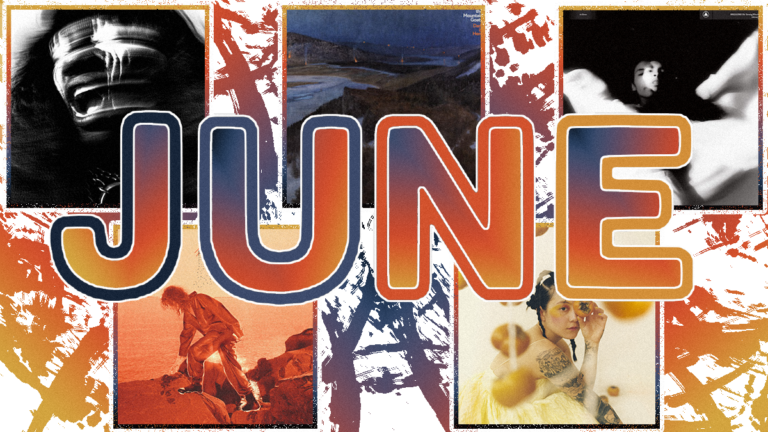 The Turning Wheel, Chrystia Cabral’s third album under the project Spellling, offers bewitchingly captivating progressive folk and neo-soul songs. A shift towards natural instrumentation marks a stark change from 2019’s synth-heavy Mazy Fly, giving these songs a new liveliness, and pushing Cabral’s songwriting towards the theatrical. The sonic palette on its own can be bewildering at first–veering off without warning into performances of soul, hard rock, classical, folk, and of course, synthwave. It’s no surprise that the personnel list reveals more than thirty performers–all of whom sound great. The songs are left with an enchanting sense of otherworldliness and magic. The opener, “Little Deer” showcases the album in all its grandeur. Instrumentally expansive but melodically simple, Cabral uses the symbol of a hunted deer to explore ideas of love and shared consciousness across living beings–oneness–themes returned across the album in lyrics that read like incantations. The title track, “Turning Wheel” is a surprisingly catchy and approachable folk pop tune. Here, the narrator struggles with conflicting ideas of unity and isolation, though the chorus affirms the solace in loneliness. “Queen of Wands” finds strings morphing into synths held up by electronic drumming, reminiscent of some of the eeriest moments of her previous work. This album is a witchy and mind-altering experience–one I could recommend to anyone.

Japanese Breakfast’s third album, Jubilee, balances dance-worthy anthemic tracks with a storyline that pulls at the soul, highlighting moments of tragic beauty at the center of the human experience. Songwriter Michelle Zauner explores moments of weakness in love, in personhood, and in coming to terms with the nature of loss, but within these themes she masterfully paints a picture of hope and perseverance. In the opening track, “Paprika”, listeners are called into the world of Jubilee with repetitious horn melodies & symphony strings while Zauner reflects on sharing her loss with the world through performance. In the following track, “Be Sweet”, she juxtaposes lines like “Tell the men I’m coming” with “Be sweet to me baby, I wanna believe in you” telling the ever-relatable story of wanting to dive back into love while at the same time being painfully aware of vulnerabilities revealed in past encounters. Similar themes of vulnerability are explored in “Posing in Bondage”, where Zauner uses the idea of waiting for one’s lover in bondage while time passes and the lover’s failure to show becomes increasingly apparent. Another noteworthy track, “Side Tackle”, composed of punchy synth and revelatory sax melodies, reveals Zauner’s objective as she sings, “I’m tackling this void”. This line feels like a perfect metaphor for the album–a story about finding jubilee in the void. In the album’s seventh track, “Savage Good Boy”, Zauner strays from personal exploration and steps into the shoes of the wealthy to highlight a more tangible vulnerability that exists in classism and socioeconomic disparity. In Jubilee, Japanese Breakfast has constructed a deeply personal yet relatable inquest into the nature of human vulnerability. It is a testament to her incredible artistry and a beautiful listen.

Backxwash – I LIE HERE BURIED WITH MY RINGS AND MY DRESSES

On the newest album from Backxwash, she continues down the path of dark, industrial metal-infused hip hop, rapping verses that mix the personal with the occult. Following a short introduction, “THE PURPOSE OF PAIN”–which introduces the album’s themes of pain and healing–Backxwash spits her opening verse over distant screams and waves of distortion on “WAIL OF THE BANSHEE”. The first single and title track “I LIE HERE BURIED WITH MY RINGS AND MY DRESSES” is a perfect encapsulation of why this album rules. Ada Rook’s screeched chorus is cathartic and infectiously catchy. In shouted bars, Backxwash points to the enemies of liberation and their advantageous co-opting of Black and queer identity: “Lost in addiction / Exiled from my sisters / The colonies and their vision / Robbing me of my diction.” On “TERROR PACKETS” she recalls the pain of drug addiction at her lowest points, and Censored Dialogue opens with a laid back verse concerning the fracturing of relationships after coming out–they even have a hook after this verse which is memorable in its own right–before Backxwash comes in with her own screamed chorus. While Backxwash stuffs a lot of quality into just over thirty minutes, it seems to go by much quicker–another great entry into her catalog.

Planet (i) by Squirrel Flower feels like a trip down memory lane, as songwriter Ella Williams guides the listener with her captivating voice and introspective lyrics. The album starts with the dark, brooding “I’ll Go Running” with the guitar and drums crescendoing towards the finish. “Hurt A Fly” flirts with poppy melodies, her voice backed by energized drums, piano, and guitar solos. This track feels like indie pop, but it fits into the album because of Williams’ silky vocals. Tracks like “Roadkill,” “Big Beast,” and “Flames and Flat Tires” start off barren with airy vocals but soon transition to a stronger vocal performance accompanied by grounding electric guitar and drums. Williams lived in Iowa for a bit and reminisces on playing her guitar in the love-song-like “Iowa 146.” A prime example of Williams’ thoughtful lyrics is “Pass” with lyrics like “I’m staying up all night/To wrestle with it/The good and the bad.” “To Be Forgotten” features layered vocals and large melodic leaps creating an expansive sound that is heart-wrenchingly beautiful. From the dark sound on “I’ll Go Running” to the calm acceptance on the album closer “Starshine,” Williams assures listeners there is hope in the dark with the comforting and reflective sound of Planet (i).

The Mountain Goats – Dark In Here

Lately, John Darnielle of the Mountain Goats has been a personification of the working writer. When not penning novels, his prolific songwriting makes a year without a new album or EP a rarity. It just so happens that this new set of songs on Dark In Here is some of the band’s best work in years. The instrumentation is never particularly showy–folk rock guitars, some keys across piano and organ, some spare woodwinds–restrained drums which only hit hard when the time is right. Attention is primarily on Darnielle’s lyricism and vocal performance, which he keeps on the softer end of his register. These songs are sad, or at least, they explore different aspects of loneliness and darkness. On the first single from the album, “Mobile”, Darnielle returns to his classic calling card of biblical imagery. A narrator reflects on Jonah’s travels in shame after rejecting God–each verse ending with a return to their current situation–”I’m on a balcony in Mobile, Alabama, waiting for the wind to throw me down.” Meanwhile, “The Slow Parts in Death Metal Songs” also addresses a kind of loneliness, one rooted in social anxiety and the easing of it with devastating music. Dark In Here does what many of the best Mountain Goats albums do–and greets the most disaffected and alienated among us with open arms.