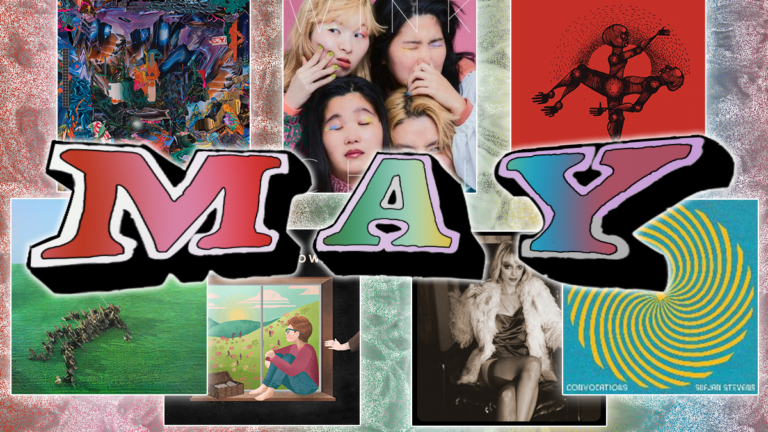 Long before the release of their debut LP, Squid has been making waves in the post-punk community with their own brand of angular and uniquely provocative songwriting that has set them apart from peers in the genre. With the often deranged and purposely erratic vocal delivery of singer Ollie Judge and the driving pseudo-punk melodies conducted by the rest of the band, there is no doubt the group has emotional, musical, and lyrical potency. In their most recent works, including the two singles they released in 2020 and their latest LP, Squid has begun to incorporate jazzier, synth-laden elements into their sound. On Bright Green Field, songs such as “Documentary Filmmaker”, “The Flyover”, and “Global Groove” all heavily feature forlorn horns and synths with a vintage haze about them. The track “Peel St.” shimmies along with a fervent guitar lead that gives the song an infectious groove. Still, the band manages to work in much of what garnered them attention in the first place with the throat-shredding yelps and shouts, off-kilter guitars, and snappy drums, all of which coalesce to create what is from front to back a vibrant and energetic listen.

Stars Hollow – I Want to Live My Life

The debut full-length album from Iowan emo rockers Stars Hollow, I Want to Live My Life, follows through on the promise of the band’s previous EPs, while also carving out a space for a less aggressive, more tender sound. This change is immediately apparent from the opening vibraphone synth, reminiscent of a spinning music box beneath vocalist Tyler Stodghill’s newfound comfort in a soft and low range—also showcased on songs “With Weight.” and “Beside You.” Don’t get it twisted—this record rages with catharsis. There’s still plenty of Modern Life Is War-esque hardcore screams over Midwestern-staple twinkly guitars. “At the Bottom.” could fit just as snugly into the tracklist of Happy Again, with math rock grooves and mournful breakdowns to keep listeners on their toes. Lyrically, the album is quite harrowing, filled with regret, longing, and ennui through striking metaphor. In the final moments of the closer, however, Stodghill arrives at an uplifting resolution: “I’ll face everything / I want to live my life / But better.” The newest from Stars Hollow finds the band at the peak of their ambition, and they meet this challenge with fantastic execution.

CHAI’s album WINK seamlessly encompasses numerous genres, from electropop to R&B, for an upbeat and dancey J-pop record perfect to kickstart summer. “Donuts Mind If I Do” opens the album in a chill manner with crooning synths and a tooth-rotting sweetness in the vocals. “Maybe Chocolate Chips” and “KARAAGE” show the R&B influence on this album with smooth vocals and mellow, spacey instrumentals. CHAI also experiments with the electropop genre on “ACTION” and “END.” Both have simple yet catchy choruses and rhythmic lines closer to the house pop genre that implores the listener to move. “PING PONG!” demonstrates the fun and collaborative side of CHAI with YMCK’s production imitating the sound effects from a video game. The short album closer, “Salty”, brings the energy down to create a simply nostalgic sound, leaving the listeners wanting more. While the instruments, including electric bass, drums, synths, and piano, are mostly in a supportive role throughout the album, they have a solid, grounding sound that contrasts the high register of the vocals. These elements paired with the bubbly production of CHAI and others create a movement-inducing album across its multiple genres.

Smoky, bluesy art pop is not something that St. Vincent is new to, but on this new record, Daddy’s Home, she shows that she is capable of blending swaggering blues with modern, danceable beats. The most impressive thing this album offers is its cohesion despite being so musically diverse. It frequently oscillates between eccentric art pop tracks like “Pay Your Way in Pain” and “Down” with bouncy beats and heavy use of vocal layering and effects, to smooth psychedelic pieces with lush, shimmery keys and reverb-laden guitars–even to bummed-out blues cuts like “Daddy’s Home” and “The Laughing Man” that each offer incredibly personal lyrical narratives. In all cases, the exquisite sense of weaving lyrical and musical ideas together creates a unique ethos for this album that recalls both St. Vincent’s past rooted in the 70s blues and psych sounds and also maintains a refreshing sense of modernity.

Listen, I get it. It’s ambient music. It can be difficult to get in the mood to listen to 2 and a half hours of drifting synths and lonely piano. But I guarantee that Convocations works as background music and headphone heaven. Sufjan’s been heading towards a more experimental sound lately, and this may be the furthest removed from his previous works that he has sounded. Regardless, this is a must-listen album. Ambient music may not seem as prominent now as in its 90s-2000s heyday, but Convocations stands its ground against albums from the genre’s classics like Stars of the Lid or even Aphex Twin. Sufjan has the ability to bring beauty out of sparseness, and that effort is clearly shown here. The music can switch from the prettiest melody you’ve ever heard to melancholy piano to just, well, sparseness. And all of it bleeds in together as if it’s the most natural thing in the world. Drones meld with string, organ combines with string and synth stabs to create an almost organic atmosphere that surrounds the listener in a blanket. I’m not going to lie. It’s not all relaxing wispy sounds. This album will freak out when you least expect, but it’s never meant to harm. Convocations reminds us that scary things happen out there in the world, but in the end, it’s also the most comfortable place you’ll ever find here in the universe.

Sons of Kemet – Black to the Future

Jazz quartet Sons of Kemet are known for fiery and frenetic performances paired with socially conscious themes. Black to the Future continues this trajectory in a slightly more sonically reserved manner—though the messages throughout much of the features and tracklist are as pointed as ever. The opening track, “Field Negus”, floods with subtle yet disorienting horns as one of many memorable guests, Joshua Idehen passionately speaks poetry about the history, present, and future of the Black liberation movement: “We are rolling your monuments down the streets like tobacco / Tossing your effigies into the river, they weren’t even worth a pyre.” “Pick Up Your Burning Cross”, with rapper Moor Mother and clarinetist Angel Bat Dawid matches the energy of previous releases, with a straightforward and frantic saxophone line that hits like a shout. The lumbering tuba grooves on “Think of Home” and “In Remembrance Of Those Fallen”, on the other hand, provide a perfect nook for Shabaka Hutchins’ seemingly effortless and smooth saxophone playing to maneuver. Black to the Future finds Sons of Kemet refining their style as one of the most important acts in contemporary jazz.

To expect anything less than off-kilter and left-field from black midi is to underestimate them, but Cavalcade proves that being “left-field” is not a matter of luck or a lack of ingenuity. Across this album, the band employs a Coraline-esque balance of blissful fantasy and demented horror with contemporary jazz-inflected progressions, snappy drums, and perfectly spaced breaks into full-bodied blows of distortion and drive. Plainly spoken, this record ascends the band into a realm of eccentricity that is artfully crafted and masterful. On the opening track, “John L”, the band comes roaring in on squealing guitars and oblique melodies with an unusually clear and smooth vocal delivery from lead singer and guitarist Geordie Greep. This new vocal sound carries across a record that, in comparison with their prior 2019 release, Schlagenheim, is significantly jazzier and more complex. This complexity can be found in multi-phased songs such as “Chondromalacia Patella” and the closer “Ascending Forth”, but it also comes in the form of a renewed sense of lyrical poeticism and structural intricacy. While it certainly does still contain the noisy eccentricity of black midi’s earlier works, Cavalacade also shows that the band is worth the praise they have received in their ability to be both diverse and sharp with their songwriting.