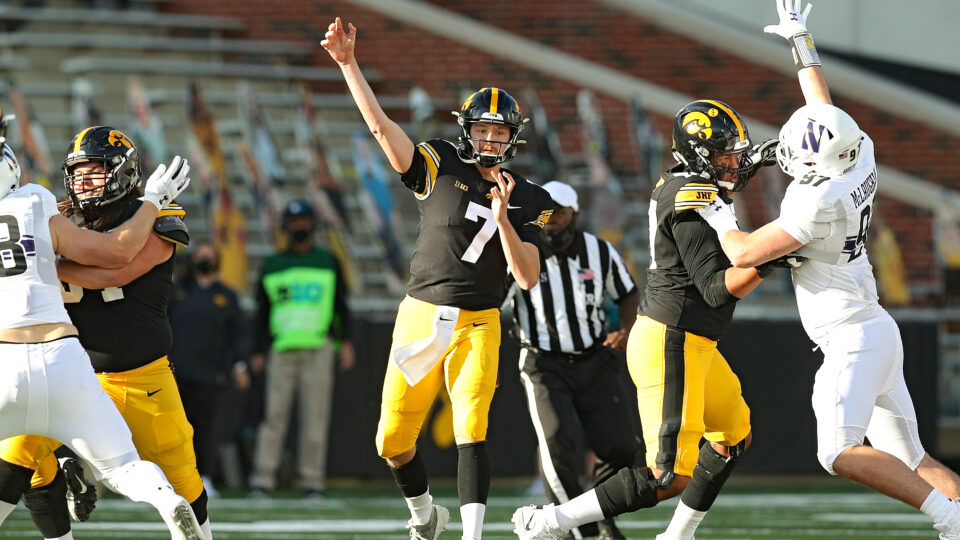 Not since Iowa beat Illinois 19-10 on Senior Day in 2019 had the Hawkeyes played in front of home fans outside of friends and family. That streak ended Saturday morning as Iowa held it’s first of two open practices this spring with fans in attendance. Fans arrived as early as before 7 AM to get the first chance to see their Hawkeyes in person since November of 2019. Many were pleased with the results, but it would’ve taken a natural disaster to ruin the moods of the black and gold this weekend.

“Certainly is great to be back in Kinnick itself, this is the first time we’ve been there this spring, and even better to be there with fans. It’s great to have live people in the stands,” Kirk Ferentz said. “That provided a little bit of electricity for everybody. I think certainly we’re hopeful it’s a sign we’re moving in the right direction as country.”

The biggest storyline heading into the first of two open practices was the competition at the quarterback spot between Deuce Hogan, Alex Padilla and incumbent starter Spencer Petras. Petras got the run with starters first, throwing a dart of a completion and an interception before tweaking his left knee evading pressure in the pocket. Petras did return a short time later and was highlighted with long completions to Tyrone Tracy under pressure.

Out of the three quarterbacks today however, it appeared Alex Padilla gave the most consistent performance. Seen by many as the third quarterback behind Petras and Hogan, Padilla threw two touchdowns on the day (one was called back due to penalty) and scrambled for another in the controlled scrimmage. Even with the struggles with pass protection from the offensive line, Padilla consistently found receivers in rhythm and ran when necessary.

Deuce Hogan, who has become a fan favorite without ever playing a down of game action, showed flashes of his moxie in the scrimmage portion of today’s practice as well. The freshman made some throws that impressed, with a deep crossing route to Quavon Matthews and an on-the-run throw to his left to Alec Kritta. However, it appeared that Hogan still faces some issues that all young quarterbacks face, making one or two reads then using his legs, touch on passes, and so on.

“Spencer [Petras] still has a clear advantage from experience and he’s doing a nice job. After that, it’s wide open, we’ve rotated pretty liberally and we may talk about that rotation moving forward here,” Ferentz said. “I’d probably say Alex [Padilla] and Deuce [Hogan] are probably the closest to each other at this point. It’s way too early to call it.”

Another area that many have keened in on is the battle for both starting offensive tackles spot. With Alaric Jackson off to the NFL and Mark Kallenberger retired, the competition to protect the edges is the most wide open it’s been in quite sometime under Kirk Ferentz. The Hawkeyes stuck with Pella-native Nick DeJong at right tackle and junior Jack Plumb at right tackle. Others that are expected to compete are Mason Richman, who played at left guard with the starters Saturday morning, and Cody Ince, who is out for the remainder of the spring with a lower leg injury.

Perhaps the unit that played it’s best ball on Saturday morning was the defensive line, especially impressive for a group that is replacing stars such as Davyion Nixon and Chauncey Golston. Earlier in the spring season, defensive coordinator Phil Parker said he believed that Iowa’s defensive line could go 10 deep, and with the play of reserves such as Lukas Van Ness, Jake Karchinski and walk-on Louie Stec, that vision could become a reality.

“Louie is getting work and has been getting work all spring, he’s an extremely tough guy,” Ferentz said. “He’s taken good advantage of the opportunity he’s gotten and he’s working hard, he’s not the tallest guy in the world, but he’s got good leverage and is tough to move.”

Wide receivers have also been a big question mark for Iowa throughout the 2021 spring practices as the Hawkeyes look to replace Ihmir Smith-Marsette and Brandon Smith, a pair of four-year starters who helped reignite the Iowa offense under Brian Ferentz. Tyrone Tracy is the bell cow of the group, but after Nico Ragaini, it’s a rather young group for Iowa.

“After Tracy and Ragaini, it’s really interesting. It’s a land of opportunity for everybody, including the two newcomers,” Ferentz said. “We saw some flashes from guys today, they don’t have that consistency in their play yet, but they’ve shown they’re capable of helping our football team.”

Iowa’s next open spring practice will be on Saturday, May 1st at 9:30 AM, with the gates opening to the public at 8:30 AM.