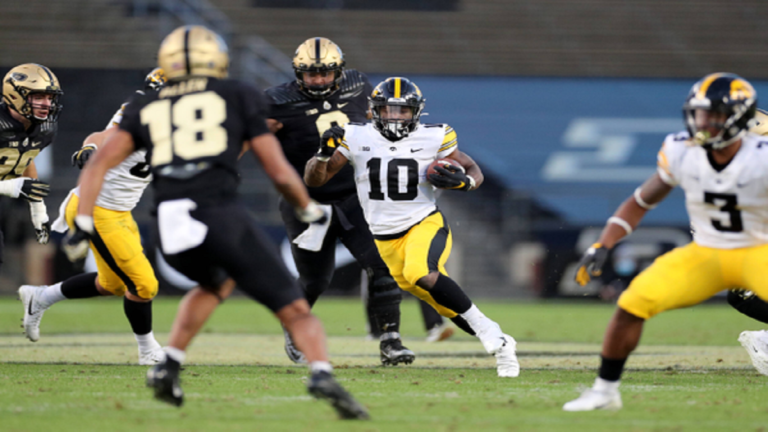 The last time the Iowa Hawkeyes took the field for a Big Ten football game was when Keith Duncan booted a 48-yard field goal to beat Nebraska in Memorial Stadium. That was nearly 11 months ago, and the Hawkeyes really showed it on Saturday.

Iowa has always hung its hat on attention to detail, and that attention seemed short in Iowa’s 24-20 loss to the Boilermakers, their third loss in four years to Purdue. Iowa fumbled the ball three times and lost two of them. Both lost fumbles happened deep in Purdue territory.

Sophomore running back Tyler Goodson fell victim to one of those fumbles. This fumble was actually self-inflicted, as senior guard Cole Banwart knocked the ball out of Goodson’s hands in an attempt to push him forward.

“Ball security is emphasized in practice daily, we take it day-by-day. But, it’s been awhile since last August, but that’s no excuse for fumbling the ball. We’ll go into next week and keep working on ball security,” said Goodson.

Critical fumbles were signs of impending doom for Iowa last season. Mekhi Sargent fumbled on the opening play of the game against Michigan in 2019 and three fumbles against Penn State also doomed the Hawkeyes in Kinnick.

Penalties were also a critical problem for Iowa, as the Hawkeyes were flagged ten times for 100 yards in penalties. A majority of the penalties were of the personal variety: holdings, personal fouls, etc. Many of these penalties stalled out promising Iowa drives.

“False Starts are only five-yard penalties, but they’re really momentum killers. It just makes it tougher to sustain rhythm offensively and it makes the hill that much taller to climb,” Iowa head coach Kirk Ferentz said.

“The ten-yard plus penalties, obviously they affect the game a great deal, including that last one, the hands-to-the-face, that got them 15 yards closer to the goal line. All those little things add up in the course of the game, we typically have done a good job with that, but the lack of live work probably hurt us.”

Iowa did not have a game of 100+ yards of penalties in 2019, the highest yardage being 60 yards in penalties against Michigan…and Purdue.

With Purdue’s superstar receiver Rondale Moore out of action on Saturday, Bell finished the game with 13 receptions for 121 yards and all three Purdue touchdowns and was targeted 21 times. The only other Boilermaker receiver targeted double-digit times was Milton Wright with ten targets.

“We weren’t real focused on the defensive side, we needed better communication,” said senior cornerback Matt Hankins on the defenses lack of containment on Bell.

Iowa’s defense also struggled to contain Purdue running back Zander Hovarth, who was filling in for an absent King Doerue. Hovarth wore down the Iowa defense in the second half as the Mike Alstott look-alike rushed for nearly 100 yards in the half, and 136 yards in the game overall.

Offensively, Iowa still moved the football better than most Hawkeye teams have in season-openers in recent memory. The Hawkeyes offense totaled 460 yards of offense, with 195 yards rushing and 265 yards passing.

Tyler Goodson looked quicker, stronger, and more decisive in his first game of his sophomore campaign. Saturday saw Goodson rushing for a team-high 78 yards, averaging just under 5 yards per carry. Senior halfback Mekhi Sargent finished with 71 yards on 11 carries as well. Iowa’s offensive line looked like it was in harmony for most of the game as well.

The rhythm of the Iowa offense was impressive at times, especially when you consider that it was still breaking in new starting quarterback Spencer Petras. After a shaky start, Petras begin throwing the ball with confidence. While he still finished 22-for-39 passing, Petras maintained a command of the Iowa offense that matched his predecessor, Nate Stanley.

“I was definitely nervous to begin the game, but we were able to get in a rhythm, we were able to run the ball effectively, and that makes it easy,” Petras said. “We can get the ball to our playmakers, it makes my job easy. We were getting good protection too, it really helped me settle down.”

For all that went wrong, there as still a lot of good Iowa could take away from their season-opener. However, no college football program praises moral wins, and especially not in a program with such sustained success as Iowa.

Whether it’s a refocusing of goals and of what’s important, or simply following the “one game at a time mindset”, Kirk Ferentz would tell you they’re focused on Northwestern, and that his players have shifted their focus to the Wildcats as well.