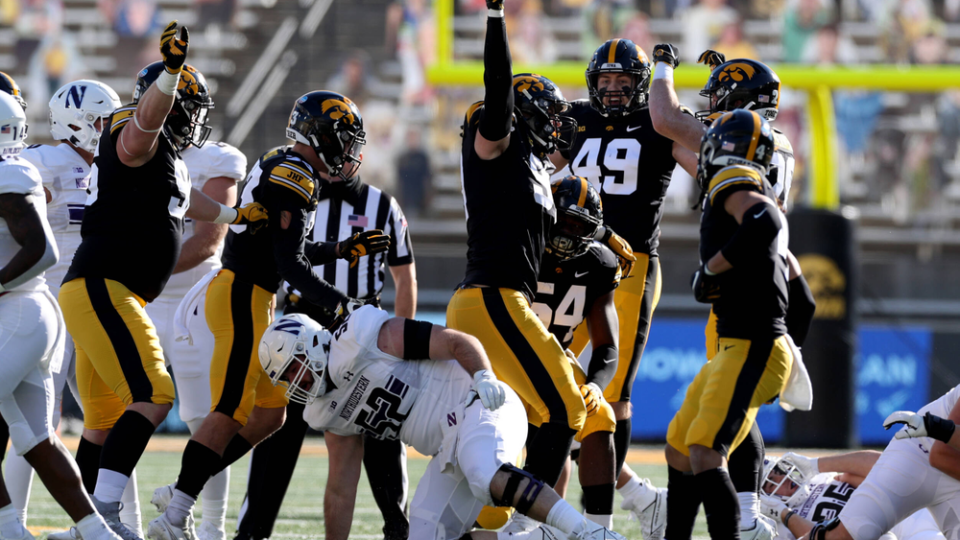 After a tough loss to Purdue in West Lafayette, the Iowa Hawkeyes looked to get their season back on track with their home opener against the Northwestern Wildcats. Iowa started out strong, but crumbed after an early lead against the Wildcats, losing 21-20.

Iowa amassed a 17-0 lead early in the first quarter. A muffed punt and fumble recovery gave Iowa two quick opportunities to score. A seven-yard touchdown pass to Brandon Smith and a 15-yard rushing touchdown by Tyler Goodson got the Hawkeyes out in front early.

Northwestern would go on to score halfway through the third quarter and take a 21-20 lead. Neither team scored for the rest of the game.

“These games are really close, but we just need better execution,” said Petras. Petras finished with a line of 26 completions on 50 attempts for 216 yards and one touchdown and three interceptions.

While Iowa as a team struggled, junior defensive tackle Daviyon Nixon cemented himself as a playmaker on the Hawkeye defensive line. Nixon finished the game with one forced fumble, one-and-a-half sacks, three tackles for losses, and 11 total tackles. Nixon encouraged his teammates throughout the entire game.

Iowa seemed to give up on their run game late into the game. They rushed the ball 23 times throughout the game and passed the ball 51 times. Head coach Kirk Ferentz said that Iowa did not run the ball effectively.

In a normal season fans would expect to pack Kinnick Stadium on the home-opener. Due to COVID-19 restrictions, fans were not permitted to attend the game. Only family of players from Iowa and Northwestern could attend. The official attendance of the game was 1432.

“It was a little weird feeling, but that doesn’t matter. We got to go out there and play the game. Fans help. They help a lot with their energy, but we don’t have that right now, so we got to play off our own energy,” said senior wide-receiver Ihmir Smith-Marsette.

Starting the season 0-2 was not what many had expected at the start. This loss leaves Iowa as a long shot in the Big 10 West race. This is only the second time the Hawkeyes have started a season 0-2 with Kirk Ferentz as head coach.

The Hawkeyes look to get their first win of the season at home against Michigan State on November 7. Iowa will have one less day to prepare as the team will not have practice on November 3, the day of the upcoming election. Michigan State is fresh off an upset win over in-state rival Michigan. The game starts at 11:00 AM.