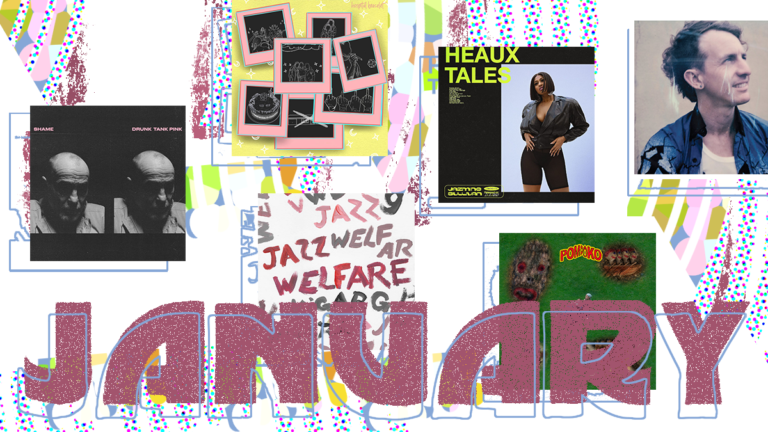 From the first noisy guitar notes of Pom Poko’s Cheater, the band makes it clear they intend to start the musical year off with a bang. On this album, the band plays noise pop and indie rock while staying true to their jazz origins through lively percussion and free-spirited production. These songs combine ferocity and fun. Fangel always delivers a strong melody with a charisma that comes through whether she’s singing or shouting, no matter how wild the guitar lines get. “Like A Lady” has a chorus straight out of 90s alt-rock, with a creative instrumental arrangement that renders this familiar style fresh and exciting. “Danger Baby” has a smooth sliding guitar line at its center and is just a few sonic changes away from being a full-on indie-pop tune. Poignant moments on the record come and go, such as the chorus on “Andrew,” without feeling overwhelming. The band and their tight performances are with the listener every step of the way. Pom Poko’s jazz influence may be at its clearest on “Baroque Denial” with its dizzying percussion and curiously rhythmic guitar wails. For any music fan who wants a bit more excitement out of their pop-rock than the standard affair, Cheater is an album well worth a few listens.

The brand of tongue-in-cheek, abrasive yet catchy songwriting that Swedish post-punk band Viagra Boys has engineered is on full display on their sophomore LP Welfare Jazz. The album certainly lives up to its name with instrumentation that is often jazzy, bluesy, and unrelentingly infectious. The track “Into the Sun” boasts a toe-tapping beat and boozy bassline. Many tracks–most notably “Ain’t Nice” and “6 Shooter”–also employ the saxophone, which incites a constant sense of grasping for meaning and stability. The instrumentation and lyrical content across the album facilitate the creation of a loose narrative, exploring the life of a chronically drunk, belligerent scumbag. The narrative equally incites pity and repulsion. The slovenly delivery of the vocalist and the frequent descent of the lyrics into despair and self-loathing create a vision of a man looking for happiness, yet struggling to climb out of the dark and dingey space of impoverished living. In its final moments, the album lifts itself out of the oppressive atmosphere of chronic dissatisfaction to offer a goofy and sweet cover of John Prine’s “In Spite of Ourselves”–a conclusion that argues companionship can often be the key to contentment.

Buck Meek’s sophomore solo album, Two Saviors, is fraught with nostalgia. Meek tells stories so eloquently it feels as if he drew the tales from your own psyche. Two Saviors is Americana palatable for any listener, complete with universal themes and poetic verses that capture the human experience in each track. The soft twang in Meek’s voice effortlessly parallels the melancholy sounds of the slide guitar. The album’s first track, “Pareidolia,” reminisces upon the most beautiful, simple, earnest moments spent with a partner. It also addresses the deeply human desire to assign meaning to anything and everything. It is best listened to while slow dancing around the kitchen in a blissful trance. The album’s second track, “Candle,” features Meek’s Big Thief bandmate Adrianne Lenker as a co-writer. It tells of a life on the run–coming to terms with fate in what feels like a love letter addressed to a mystery figure. Motifs of eyes and light are tucked away into each song and further develop the album’s overarching theme of beauty in the simplicity of the human experience. In Two Saviors, Buck Meek has crafted a captivating listening experience, and a chance for us all to pause and consider the elegance in the mundane that ties our life stories together.

Here is an EP of ever-evolving surprise. The tongue-in-cheek title, seamless R&B production, and Sullivan’s powerhouse vocals seem poised to deliver track upon track of sensual jams; indeed, Heaux Tales is provocative, but not as one may expect. Sullivan instead takes the listener on a journey through the complex intersections of gender, class, and race that surround sexuality in 2021. She opens the album with hazy musings on post-party regret with “Bodies,” before showing off her stellar voice in the confident groove of “Pick Up Your Feelings.” She celebrates the wearing of rose-colored glasses in “Put It Down” before trying to rebound when it all falls apart with “Girl Like Me (feat. H.E.R.)”. What ties the project together are the eponymous Tales: six spoken interludes from women who frankly discuss love, money, and confidence. Sullivan becomes a modern-day bard, lending her voice to stories of women’s sexuality presented without coyness or shame. If you have to pick one song, make sure it’s “Lost One” – the tender letter from a cheater to her absent ex-lover is at once sweet, selfish, and heartbreaking. But taken as a whole, Heaux Tales is a rare rumination on life and love that shouldn’t be missed.

On Hospital Bracelet’s debut full-length album, South Loop Summer, the band shows their consistency in a quality-over-quantity batch of excellent emo songs. In traditional midwestern emo fashion, twinkly guitar riffs trade-off for punked out quick strumming. However, what separates Hospital Bracelet from many of their contemporaries is the fantastically catchy melodies and passionate vocal performances. Vocalist Eric Christopher’s lyrics are pointed and specific enough in their woe to leave a mark. The opening title track acts as a great introduction to the themes the listener will hear across the record: friendship, loneliness, love, regret, and the financial instability this downwardly mobile generation is all too familiar with. The song also has a chorus that would fit snugly in any arena rock ripper. This is followed by the far more patient and intimate “Sober Haha Jk Unless,” where Christopher details their experience with addiction over a steady guitar line which builds into a cathartic crescendo. “Feral Rat Anthem” is another highlight, where Christopher sings with righteous rage towards an unfaithful and manipulative partner: “You sat there and juggled all of us. But even clowns are good at that and you keep on f*cking it up.” “Sour OG RPG”, meanwhile, is the best song of heartbreak during a tabletop roleplaying campaign that a RPG fan could ever ask for. Through charisma and energy, Hospital Bracelet cements themselves as a band to watch in the midwestern emo genre.

As one of the more significant post-punk releases for the month of January, Shame’s Drunk Tank Pink contrasts with the eccentric and jazzier stylings of their cohorts in Viagra Boys. Shame employs a more traditional take on the genre, which isn’t to say Drunk Tank Pink is any less exciting or compelling. It boasts a wealth of danceable, angular songwriting with shouty vocals, fervent guitar playing, and emotionally potent lyrical content. The title of the album itself refers to a shade often used to paint the walls in hospitals, prisons, and psych wards to subliminally keep patients calm amid stressful situations. The album’s title seems ironically fitting, as the album sears its way through song after song with yelps and howls from the lead singer. and anxiety-inducing, incessant drumming . But between aggressive onslaughts about being someone’s dog or puppet as on songs like “Great Dog” and “6/1,” the listener is occasionally offered a reprieve in the exhausted calm of “Human, for a Minute” and the closer “Station Wagon.” The latter eventually builds into a reservedly optimistic monologue on the pursuit of happiness. Here, Shame offers one final cacophony of instrumentation and a nod to something brighter in spite of the emotionally fraught chaos the rest of the album indulges in.