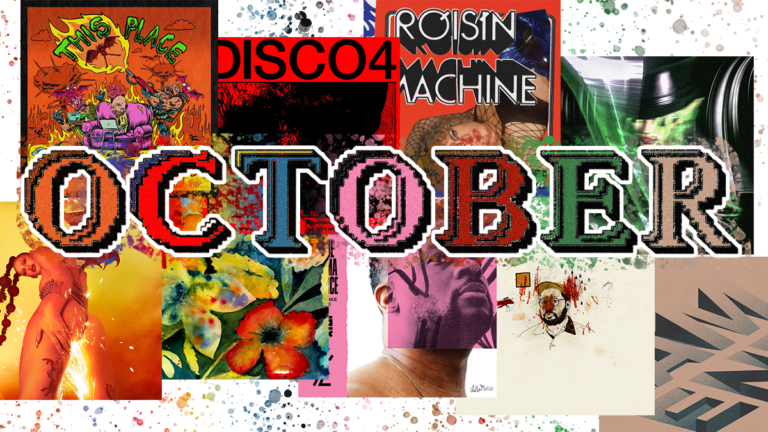 Dorian Electra has always been antagonistically charming and openly defiant of the unspoken dos and don’ts society holds dear, specifically concerning gender and sexuality. Their 2019 debut Flamboyant was pointed at defunct ideas of toxic masculinity and embracing outsiderness. Now in 2020, Dorian playfully assaults the fragile ire of loud-mouthed homophobes and fedora-wearing incels. Songs like “Ram it Down” and “My Agenda” subvert the claims that queer people force their sexuality and/or gender onto unwitting cis-het suburbanites. In their typical pitched-down vocals, Dorian jeers about turning the frogs gay with as part of the homosexual agenda. This references a popular soundbite from one very enthusiastic conservative tv show host, against shrill guitars and assertive club beats. Overall, the album plays up chaos with harsher vocal performances, head-spinning features, and industrial rave grooves that are both danceably catchy and searingly sinister. The track “M’Lady” features breathy vocals over a harsh, mechanical drop. On “F the World” a guest appearance from The Garden lives up to the eccentricity such a feature promises with a Zelda-esque melody that warps into an onslaught of thumping beats and odd back and forth vocals. If the album does anything extremely well, it’s getting up in your face and announcing its agenda loudly and proudly.

Eartheater – Phoenix: The Flames are Dew Upon My Skin

On her newest album, Eartheater fuses elements of folk, electronica, and ambient to create an absolutely harrowing experience. Acoustic guitars and strings create the core of most tracks. This creates space for her downtrodden vocals and the odd samples, which sometimes act as a percussive rhythm section. Samples include what sounded like a creaking old ship on “Volcano” and some kind of modulated bird chirp on “How to Fight.” Whatever they are, they create an alluring and eerie atmosphere. At times, she produces sounds from the cellos and violins which I can only imagine being made by playing below the instruments’ bridges. Synths are deployed sparingly for atmospheric or melodic purposes but never distract from the album’s ancient rusticism. Vocally, Eartheater covers a large range. Her falsettos can reach into a powerful shriek, such as on “Below the Clavicle.” She also reaches comfortably into her lower register to pull off harmonies, such as on “Mercurial Nerve”. The album is at its glitchiest on the transitional moments in the tracklist, which transcend the idea of an interlude by being such excellent sound pieces (“Burning Feather,” “Goodbye Diamond.”) Eartheater’s Phoenix: The Flames are Dew Upon My Skin gives the listener a sense that something both horrible and beautiful has been released upon the world.

Adrianne Lenker’s songs takes us into the woods with one guitar, her signature ethereal vocals, and the hums and chirps and reverberations of nature. Lenker writes to us from a cabin in the forested mountains of Western Massachusetts during the early springtime months of quarantine. The album is a quiet reflection on love and its intricacies. Lenker talks of her need to be embraced by her lover, but more than that, her need to feel accepted by them. We are also reminded of the inextricable intertwinements of birth, death, and the natural world through tracks like “ingydar” and “come.” Other songs like “zombie girl” and “anything” allude to the breakdown of Lenker’s most recent relationship, seemingly the result of a closed-off and distant lover. Lenker ties these themes of love and death together with bird song and raindrops, enveloping the listener in Lenker’s world as she writes. Lenker’s lyricism is as poignant as ever, conjuring up images of the forest and flooding us with the many complicated feelings we have all felt in the aftermath of a breakup or when reflecting on past lovers. Through its seclusive creation, the simple guitar that accompanies Lenker, and her immersion in the natural world while penning it, songs is a return to origins in the best way.

Mark my words: disco will be the soundtrack to the end of the world. The genre always sweeps back in whenever the future is thrown into disarray. Even though the current crisis prohibits any therapeutic clubbing, a recent resurgence of frantically paced, eighties-reminiscent pop has fueled quarantine dance parties over the past six months. And no one’s doing it like Róisín Murphy. The dance music savant has matured her sound from the compressed techno of the aughts into a smooth, sparkling disco album that is possibly the most true-to-life retro tribute of the year. The perfectly mixed tracks flow into each other with confidence, taking the time to build on a flawless hook in a refreshing respite from the sub-three minute songs that have dominated the streaming era. The opening track, “Simulation,” accomplishes the rare feat of surpassing eight minutes and leaving the listener wanting more of the meandering, sensual synth that backs Murphy’s distorted vocals. The crunchy bassline of “We Got Together,” the light and playful “Murphy’s Law,” build up to the electrifying scream and heart-racing pace of “Jealousy.” If you have an hour to spare, there’s no better way to lose yourself than in a masterfully crafted atmosphere of dance and raw emotion.

Contrary to what the title might imply, this EP definitely does not suck ass. In fact, for Canadian pop-punk outfit PUP, it extends their streak of catchy and caustic scorchers that manage to slip through the fatal grasp of genre tropes. The strains of emo and pop-punk the band draws on can often become bogged down in overly noodle-y guitars and melodrama. However, PUP delivers to-the-point guitar riffs and semi-tortured lyrics that are honest and come across as more mature than the bouncy, fun-loving angst of, say, a Blink-182. On this EP, we get another serving of pop-punk prowess with cuts like “Rot” exhibiting some over-dramatized vocal lines that sell the emotional performance. It’s also seen on “Edmonton,” which boulders through a mere minute and ten seconds of fiery guitars, shouted vocals, and drums that sound like they could beat you to death—in the best possible way. Even when the band dials it back on softer tracks like “Nothing Changes,” the emotional potency dripping from singer Stefan Babcock’s seemingly shredded vocal cords bleeds intensity. In short, this EP does everything an emo-tinged pop-punk release should do refreshingly well. It leaves the audience feeling as bruised and battered as the music would imply the band itself is.

From start to finish, Touché Amoré delivers powerful and cathartic emo post-hardcore tunes on their newest album Lament. After gaining some distance from the grief of 2016’s Stage Four and re-recording their debut, the band returns with new energy, as well as matured reflection from frontman Jeremy Bolm. The throat-shredding vocals that fans have come to expect are still there over the pensive yet throttling emo chords and riffs, but this time with some unexpected turns. The first single, Limelight, is a centerfold for the record with an evenly paced build that reaches an excellently dramatic climax with some help from Andy Hull of Manchester Orchestra and a pedal steel outro. This song and others boast some of the catchiest songwriting in Touché Amoré’s discography. The chorus of “Reminders,” immediately sticks in the listener’s head with its group vocals and strong melody. The main guitar lick on the chorus of “Feign” is just as memorable, popping off in between lines of Bolm’s screams. Lyrically, the album focuses on topics such as aging, the position of the songwriter, and relationships with loved ones. The album culminates into the surprisingly stripped-down piano ballad, “A Forecast,” which explodes with instrumentation for the final third of the track. Lament makes for an excellent addition to the already fantastic Touché Amoré catalog.

Bartees Strange’s debut album Live Forever highlights numerous genres to create a well-rounded experience for all listeners. Strange is an artist based out of Washington D.C. and is originally from Mustang, Oklahoma. While the song “Mustang” is largely about escaping his predominantly white hometown, the album contains many nods to the struggles of navigating indie genre artistry as a Black man. “Mustang” and “Boomer” combine busy, fast-paced instrumentals with Strange’s raw, rough chorus to create a pop-punk sound. Strange also experiments with the rap genre on “Kelly Rowland” showing the reserved side of his voice over a laidback, yet persistent instrumental line. “Flagey God” and “Ghostly” combine the electronic and R&B genres with Strange’s strong voice and heavy, techno beats. For a more indie-folk sound, “Jealousy” and “Fallen for You” use a softer acoustic guitar and an unplugged sound, a stark contrast to the rest of the high energy album. All the tracks on this album are packed with meaningful lyrics and catchy musical lines that beg the listeners to replay. Strange’s impressive ability to incorporate different genres on Live Forever creates an album that appeals to a wide audience where every listener is sure to find a track they love.

On the newest album from Open Mike Eagle, Anime, Trauma, and Divorce, he once again invites listeners to forget every trope they know about hip hop.  This is inverted aggression, introspection, and self-doubt. The album opens with “Death Parade”, a song about cyclical retribution and trickle-down pain, then instantly switches it up to a more comical tone on “Headass (Idiot Shinji).” There’s a cadence to the album as it reconciles serious trauma and humor but never overindulges with either theme. Open Mike Eagle’s strength is in his lyrics; honest and funny with gems of wisdom with nods to nerd culture. Highlights include “Sweatpants Spiderman,” a track about regaining control of life and improving yourself. There’s also “The Black Mirror Episode,” a self-aware and humorous song where Mike Eagle blames the show for ruining his marriage. Eagle’s son—who appears under the name Little A$e—blesses the mic a couple of times on the album, most noticeably on the live-recorded closer “Fifteen Twenty Feet Ocean Nah.” This track is not only super wholesome and catchy as hell but also seems to signify a perspective shift to what matters. Anime, Trauma, and Divorce is a strong entry in an already solid catalog.

Features have become an increasingly popular trend in the music industry over the last few years. For example Charli XCX stacked her 2019 LP Charli with more musical guests than one can count. She and others have made it an art to incorporate other artists, melding opposing sounds in a way that is not only cohesive, but inventive. The band HEALTH is no exception as their recent full-length release DISCO 4: PART 1 boasts impressive features from all genres of alternative music. They weave a seamless blend of industrial, rap, hyperpop, metal, and more in this album. The opener is the only track that has no featured guest and showcases a new wave inspired sound with HEALTH’s typical ghostly vocal performance. Other notable tracks like “Power Trip” with 100 Gecs and “Full of Health” with Full of Hell, see the band playing with seemingly opposing forces. The contrasting bouncy, upbeat melodies of 100 Gecs and the abrasive stylings of black metal band Full of Hell are eager matches within the tracklist. DISCO 4: PART 1 succeeds in bringing together varying musical genres while also staying true to the core, industrial sound of the band.