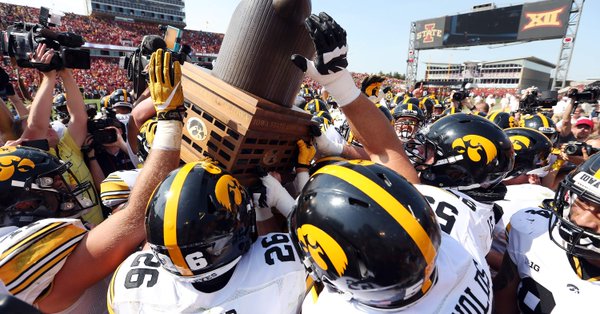 The 2017 edition of the Iowa Corn Cy-Hawk Trophy Game did not disappoint whatsoever. The newest rendition of the rivalry game will go down as a classic battle between two hated rivals. While the game started off to a relatively normal 14-10 score at the halftime break, the pace quickly heated up in the second half.

A slow start did not deter either team from pouring on the points in the following half. Both offenses threw the other’s defense out of the game in the second half. This being despite the fact that Iowa came into the game with a nationally renown defense; only allowing Josh Allen and the Wyoming offense to only 3 points.

Prior to halftime, Stanley and the Iowa offense reestablished itself with a 91 yard, 10 play drive that ended with a Stanley to VandeBerg for a 17 yard touchdown. Matt VandeBerg missed majority of last season with a broken foot; this was his first touchdown catch following the injury.

With 7:21 remaining in the third quarter, Iowa took a commanding 21-10 lead with another 94 yard, 11 play drive. The drive was capped off with Wadley hurdling over the pile on the goal line for a 1 yard touchdown. However, Iowa State responded quickly, effectively, and immediately with 21 unanswered points, going up 31-21 with 11:46 remaining in regulation.

Jacob Park would throw for 347 yards and four touchdowns by the end of the game with Nathan Stanley throwing for 333 yards and five touchdown to battle. Following the 21-0 Cyclone run, the Hawkeyes would strike back and would eventually tie the game.

In the post-game interview, Iowa Head Coach Kirk Ferentz spoke on the fourth quarter rally, saying, “The one thing we did all day offensively — we responded. They took the lead there, they just hit us with everything there in the second half. Our guys responded a couple more times.” And respond the Hawks would. The Hawkeyes were challenged again as Iowa State would attempt put the game away with a 38-31 lead with 4:36 remaining.

The thriller continued as Iowa would march back 81 yards in 7 plays to tie the game. Stanley completed a short pass across the middle to Wadley to tie the game for overtime. “It was a dog fight,” said Wadley, “We knew we were going to get their best effort.”

A dog fight perfectly describes the classic Ames matchup which took place on September 9th. However, the match would end in overtime. The Iowa defense showed up to force an Iowa State field goal which set up Stanley and the Iowa offense to take home the Cy-Hawk trophy.

Akrum Wadley ended the game with a strong statline, with 118 rushing yards and a touchdown on 28 attempts. Wadley also caught 72 passing yards and another touchdown on 4 receptions. Stanley and Wadley both needed large outputs to match Park with future NFL wideout Allen Lazard and Junior Hakeem Butler.

Next week, Iowa State travels to play Akron at 11 am central time on CBS Sports. The Iowa Hawkeyes return to Kinnick Stadium to take on the North Texas Mean Green on September 16th at 2:30 central time on ESPN2.