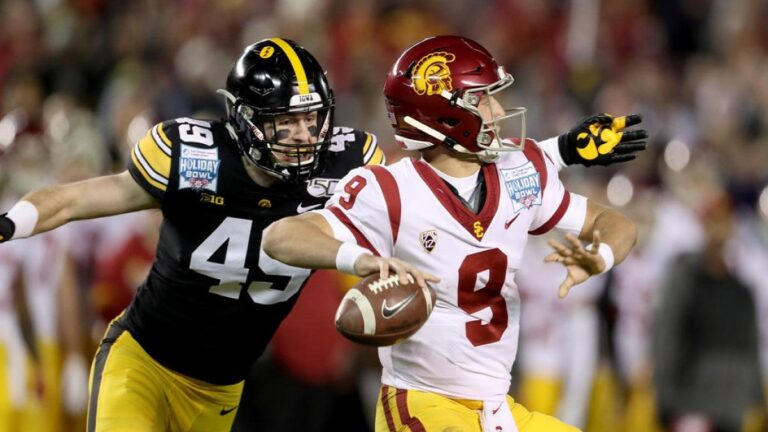 The last time an Iowa linebacker core saw three members start 10+ games in a season was 2017, with the trio of Bo Bower, Ben Niemann and Josey Jewell. Since then, injuries and the occasional sub-par performance have become more and more frequent in the normally consistent position group.

The 메리트카지노 casino´s reputation and trust have been renewed based on various games and convenient interfaces if you like to gamble you should not miss this chance to play as a pro.

Iowa’s linebacking was already taking a hit in losing a senior leader in Kristian Welch’s graduation but took two more hits prior to their first game. In June, sophomore linebacker Dillon Doyle transferred to Baylor after his father resigned as strength and conditioning coach. In early October, linebacker Djimon Colbert announced he would be opting out of the season due to concerns over COVID-19.

Despite the apparent attrition in terms of experience at linebacker, Iowa defensive coordinator Phil Parker praised his linebacking core during the coaches media day.

“Defensively, the strength of our team is our linebackers right now, even with the opt out of Dijmon this year, I really believe the linebackers is our strength,” Parker said.

Iowa’s depth chart currently lists Jack Campbell and Nick Niemann at the MIKE and WILL linebacker spots. Senior linebacker Barrington Wade is listed CASH linebacker, a hybrid linebacker/defensive back spot which was occupied by Dane Belton for a majority of 2019.

With Belton currently listed as the Hawkeyes starting strong safety on the depth chart, Parker said that the door could be open for some other notable defensive backs to slide in and play the CASH spot if needed.

“If we are going to go in the direction of having Dane at strong safety, we might pull in a Riley Moss, Matt Hankins can play there as well,” Parker said. “So we have some other guys that have opportunities to go in there if we decided to make the change full-time.”

Jack Campbell now faces the task of taking over for a player who was Iowa’s “glue guy” in the 2019 season. The difference between having Welch in the line-up and having him out of the line-up was very noticeable to those who looked closely at the Hawkeyes defense.

Campbell, a native of Cedar Falls, explained that he learned a lot from the now-departed linebacker.

“Last year, Kristian kind of took me under his wing and helped me get to the mental side of things, he was always watching film with me, talking to me about he sees things, and making different checks. That was very beneficial to me,” Campbell said.

Nick Niemann is now not only one of the senior leaders in the linebacker room, but is also replacing Djimon Colbert at WILL linebacker with Colbert’s opt-out. Niemann says that while he’d take snaps at both MIKE and WILL, he believes he’ll stick at WILL for the time being.

“I’ve been at WILL more recently, so I think everything is going well there. Obviously it’s not my first time being in there, so I was already fairly comfortable in there,” Niemann says. “It wasn’t a huge adjustment for me, but it’s been nice being there everyday in practice for some consistency.”

Niemann, who had 32 tackles and a pick six in Iowa’s Holiday Bowl win over USC, also spoke highly of redshirt freshman linebacker Jestin Jacobs. Jacobs, who has gained some notoriety for his improvements throughout the abbreviated fall training camp, is currently listed as the backup WILL linebacker.

“He’s a really talented guy, not your average Joe when it comes to physique,” Niemann said. “I think he’s doing well, he’s coming along. Just like Jack (Campbell) he’s more comfortable in the defense, he’s able to make more plays now being able to play with confidence.”