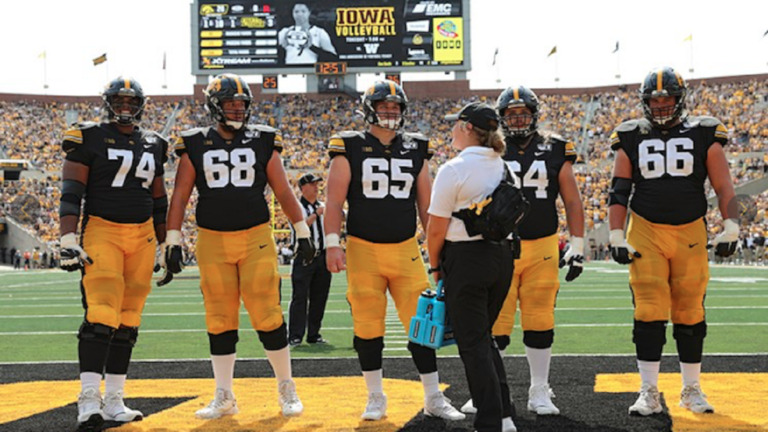 Iowa football under Kirk Ferentz has always been known for it’s physical, strong, shove-it-down-your-throat mentality on offense and has long possessed the running game to bring that mentality onto the football field. However, over the past few seasons, it hasn’t been as strong as it once was.

Since the 2017 season, Iowa has failed to average above four yards per carry in the last three seasons. Iowa’s record hasn’t suffered however, as Iowa is 27-12 in that stretch. The Hawkeyes have adapted to be successful without a particularly strong running game, but it doesn’t mean it isn’t a vital part to the team’s identity.

Last season saw a number of different offensive line combinations up front due to injuries, poor performances, and bad combinations. Those returning from last year’s squad are not focused on the ups and downs of 2019.

“I don’t like to compare from years before, every year is unique. Especially this year with everything going on,” sophomore center Tyler Linderbaum said. “I wouldn’t compare it to any other year, to where we are closer or not, but I know it’s a good group of guys, the unique thing about us is we keep pushing each other.”

Linderbaum was the constant force in the interior of the offensive line in 2019, starting all 13 games at center, which was crucial in a year where Iowa’s guard situation was like a merry-go-round. The Solon-native is a hot pick to be a breakout star in the Big Ten this season.

Senior guard Cole Banwart, who is coming off a season-ending knee injury in 2019, gave praise about the unity of the offensive line room heading into the 2020 regular season.

“I think we’re the closest we’ve ever been in the five years I’ve been here. Everyone is working hard every day, trying to be better as a person and a football player,” said Banwart. “Every guy is out there working hard and really pushing to be their best, just in case anyone is going to be out.”

Banwart’s comment stuck out to many as he was on the Iowa roster in 2016. This was the year the Hawkeyes offensive line won the Joe Moore Award, given to the best offensive line unit in the country. Competition at right guard will be between Banwart and Bettendorf-native Mark Kallenberger.

The member of Iowa’s offensive line headed into the 2020 season will be senior left tackle Alaric Jackson, who decided to forgo the NFL Draft and return for his senior year. Jackson, who also debated opting out when the season was punted by the conference, spoke of his decision-making process.

“I was looking forward to the season, for the most part. Instead of opting-out, I was just waiting to see what happens from a football standpoint,” said Jackson. “That was a big-deciding factor.”

Jackson, who switched to a vegan-based diet in the offseason, says he’s still weighing in at 320 lbs he is listed at and says he has noticed a difference with his body since switching to the diet.

“It’s a cleaner lifestyle, for the most part. Talking to the coaching staff, they thought I could lose some pounds in body fat,” Jackson said. “It’s made a lot of difference for me, so it’s been pretty good for the most part.”

Whoever gets the starting nod on the offensive line in 2020 will have the pleasure of blocking for one of the more promising young running backs in the Big Ten, Tyler Goodson. Goodson talked of his growing relationship with his blockers upfront.

“I worked last season to gain trust in the coaches and gain trust in the offensive line, so our relationship has definitely grown,” said the sophomore running back. “I’ve also became closer with each and every person up front blocking for me, I think it’s important to have a relationship in order for me to be successful.”

Goodson, who took over the starting role at running back last season in the Minnesota game in mid-November, also gave a strong statement about how he feels on this Iowa team.

“Honestly, I believe I can see this team going on to win the Big Ten Championship,” Goodson stated. “If it happens to go further, we’ll go further.”