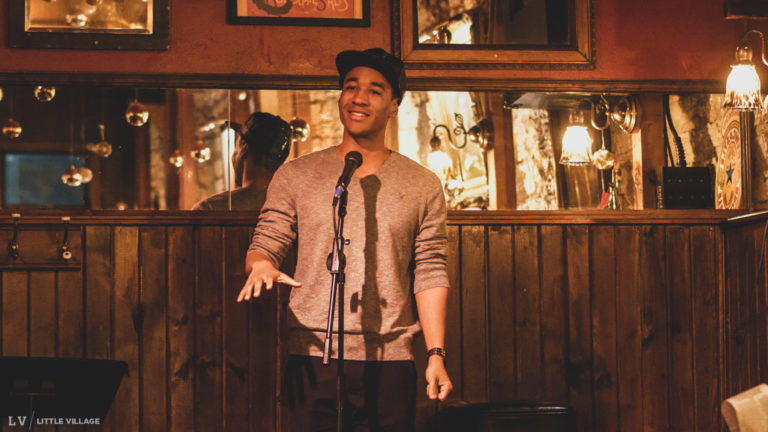 Another day, another performance to undisturbed, empty seats. Even still, the stage was flush with Iowa City talent for Mission Creek Underground. The talent of the day, bringing life and warmth to the blue-toned stage at Englert Theatre, was Caleb Rainey. “We are isolating ourselves out of safety, but art has always been the way that we connect. Now, we’re just having to find more creative ways to do it,” said Rainey as he introduced his pieces. “It’s so essential now when isolation can be so detrimental to mental health, our development, and our growth as people. We can stop doing that just because we’re isolating ourselves.”

For Rainey, the art that connects him to others is through music. More specifically, the music of language—how it escapes the tongue with rhythmic abilities, how it hides fascinating duality, how shouting a word holds as much emotion as a whisper. In short, Rainey plunges himself into the delicate art of spoken word.

Rainey comfortably leans against a stool, looking out and preparing to tell something lost from the whirlwind of news clips and frantic headlines: a story. A University of Iowa graduate and author of two poetry books, Rainey is a magnetic storyteller. The story of the moment functions under the title, “The Making.” The making, in particular, of an identity—one that had been muffled and torn down by others. Rainey describes the piece as his “experiences as a black man in the Midwest, what it was like growing up black, and my interactions, specifically with the N-word.”

At first, Rainey gently eases the audience into a personal and intimate tale of grappling with an identity imposed by others, surrounding a word with jarring constrictions and massive layers of demeaning history attached. Rainey wonders what such a label can mean for him by delving into the family around him—although not the most glamorous or fortunate, the poet fights to show their humanness, not the labels they fought against. The gentle rhythm of rhyme patters through his voice steadily: “and some of my cousins yell and can’t spell and seen the inside of a cell, but when they see me, they always wish me well.”

But then, the downpour of staccato shouts detailing moments of hatred course through Rainey—there are bullets and death and racist fathers and lingering police presence. A captivating play on words stands out in the thick of it all that could break hearts and batter souls. Rainey says of the cop’s parting words, that “only criminals like the light of the moon. And that’s when I knew he was afraid of the dark.” Children may start afraid of the initial, literal dark that envelops their rooms, but they may soon learn to fear the dark of another’s skin from the racism that drenches the world. These words pour out of Rainey until he looks defeated.

This place of defeat is how Rainey has learned to become strong. His full stage name reads Caleb “The Negro Artist” Rainey, tying back to a Langston Hughes piece titled “The Negro Artist and the Racial Mountain.” The famed poet sorrowfully examined the very identity struggle and tendencies to not embrace black heritage that Rainey echoes. Langston writes, “One of the most promising of the young Negro poets said to me once, ‘I want to be a poet—not a Negro poet,’ meaning, I believe, ‘I want to write like a white poet;’ meaning subconsciously, ‘I would like to be a white poet;’ meaning behind that, ‘I would like to be white.’”

Rainey knows his chosen name is controversial and makes many uncomfortable, but that’s part of the reason it was chosen—to eliminate discomfort and claim it as a triumphant identifier instead. As Rainey puts it, an integral part of his “unapologetic blackness.” Through spoken word, Rainey allows such an attitude to be accessible to all through the musicality of his words. One could easily sit and listen to someone who has a lot to say with good intentions, but the words could drift over their heads. When you add a melodic aspect to language—an everyday human object that is begging to be explored for its fragrant sounds of sharp t’s and smooth s’s— words become hypnotic as the viewer gets swept away in its natural flow.

That’s what also makes Rainey’s feat more vulnerable and impressive—the music has nowhere to hide. Lackluster sentiments and lyrics can’t be hidden under overbearing synths or atmosphere; the words assume center stage, Rainey’s hands the only musical accompaniment. He also recognizes that silence is music too, as he takes intentional pauses for necessary impact and suspense that cuts deeper.

Speaking of Rainey’s hands, they’re a pivotal and theatrical aspect of his performance, particularly as he flowed to the next piece, “What You Need to Hear.” The audience finds the poet to be expressive, filled with a brighter enthusiasm revolving around five points. As the viewer prepares for point one, Rainey takes the word “you” and stretches it to dynamic proportions. His voice continues to rise as the air fills up his lungs and his shoulders tense. Then, in an instant, the word is released into the world, and Rainey completes the thought: “You matter.” The theatrics perfectly highlight the joyous nature and meticulous craft Rainey brings. Every inflection and hand movement is intentional.

This is where the body language bleeds through the screen with uproarious fun. As the wordsmith compare strands of spider webs to human connection, Rainey stretches out his arms while fingers dance and twinkle. After allowing his language to expand, he also utilizes his sole instrument to show the world in its claustrophobic features: “They say the history haunting you or the system shackled around your ankles or the trauma noose tightened around your neck should direct your every step.” Rainey acts as the aforementioned “history,” grasping at his neck and self-inflicting a chokehold in the name of visual poetry.

The fifth and final point is simple: “I love you,” said with plenty of suspense and thematic delivery. Rainey lets his hands drop to his sides, signaling the end of the show—his instrument’s been put down and laid to rest.

Rainey introduced the second piece by simply saying, “It’s about what we all need to hear and I think that explains it.” And it does; Rainey recognizes that it’s in uncertain times that the world needs grounded encouragement—you matter, you have power, you are not finished. At the same time, there’s also a need for heightened, unexpected levels of creativity. In the world of spoken word, there are no concrete sentences or periods. As with a lot of activities at the moment, conventionality has to be suspended, as the viewer must surrender to the natural rhythm of speaking and fill in the instrumentation themselves.

Mission Creek’s Underground Festival may be over, but you can still watch the performances from April 1-4, 2020 on their Website, Facebook, and Instagram . The rescheduled Mission Creek Festival is currently set for September 17-19, 2020.