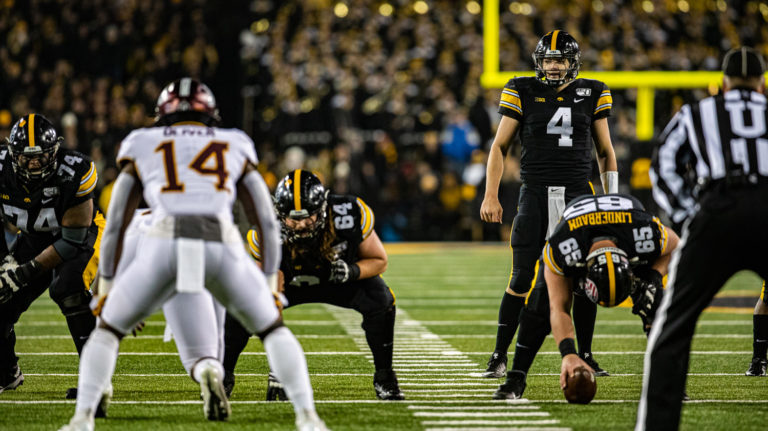 The last time Iowa faced off with the historical West Coast power based out of Los Angeles, it started off with a bang with CJ Jones returning the opening kickoff 100-yards for a touchdown to open the 2003 Orange Bowl.

It would be the only fireworks Iowa had all night.

After Iowa took a 10-7 lead, USC put up 31 unanswered points behind the arm of Heisman Trophy-winning quarterback Carson Palmer and pummeled Iowa in a 38-17 ballgame. It was a bitter end to what had been a storybook season for Iowa under fourth-year head coach Kirk Ferentz.

Iowa is almost through with their 21st season under Kirk Ferentz, who has made the Hawkeyes one of the most consistent programs in college football. USC made a meteoric rise after that Orange Bowl, winning back-to-back national championships under Pete Carroll.

Just as quickly as USC rose, however, they came crashing down just as quickly. The Trojans have been had four coaches with the “head coach” tag since Carroll’s departure following the 2009 season.

Clay Helton is the man currently in charge in Los Angeles, but has very much fallen out of favor with the Trojan faithful and will feel added pressure to win this Holiday Bowl matchup with the Hawkeyes.

Phil Parker addressed the media on Sunday as Kirk Ferentz was in Foxboro to watch his son, James, play for the New England Patriots. Parker said he hasn’t dissected USC quite yet, but has kept an eye on them.

“Sometimes I get home late some nights and start watching them out there,” Parker said. “They have some athletes. We’ll get on them soon enough.”

One of those athletes include one of the best, and perhaps most underrated receivers in the country in Michael Pittman Jr. Pittman Jr. is a finalist for the Biletnikoff Award with LSU’s Ja’Marr Chase and Oklahoma’s CeeDee Lamb and is also the FBS leader in receptions with 95.

Pittman Jr. is the bellcow of an explosive receiving core that operates under USC’s Air Raid system. But, the play of the son of former Ohio State running back Michael Pittman won’t deter how Ihmir Smith-Marsette and the Hawkeyes receiving core will play.

“Most definitely not, we’re gonna go in there and we’re gonna play our game,” Smith-Marsette said. “I don’t believe anybody is gonna try to outwork their guys, we’ll just go out there and play football.”

The receiving core is one of the few bright spots of the USC team that has been marred by injuries, a poor rushing attack, down to a third-string quarterback and a defense that has been porous at times.

Iowa comes into the December 27th matchup riding a three-game winning streak and looking for the first double-digit win season since their Rose Bowl season of 2015.

Phil Parker expects the Hawkeyes to be at full strength and not be missing anyone due to NFL Draft preparation.

“I don’t see that right now. I think they’re excited,” Parker said. “We’re going to play on the 27th, and it’s going to be the last time that we get together as a team. I think everybody is looking forward to that.”

Iowa’s stars in the trenches in First-Team All Big Ten defensive end AJ Epenesa and Pace-Rimington Offensive Lineman of the Year recpient Tristan Wirfs said that skipping the bowl never crossed their mind.

“You make it through the whole season with your teammates, with your brothers,” Epenesa said. “I haven’t decided if I’m staying or leaving. I’m just going, and play for the guys with me.”

“I’d feel like I was letting my teammates down. I made a commitment to them for 12 weeks plus camp,” Wirfs said. “It feels like you’re kind of bailing on them. So there’s no way I wouldn’t [play].”

The trip is Iowa’s first to the Holiday Bowl since 1991, where they played a Ty Detmer-led BYU to a 13-13 tie to finish 10-1-1 on the season. Iowa’s other Holiday Bowl appearances came in 1986 and 1987 against San Diego State and Wyoming respectively. Both games came down to Iowa making last-second kicks to win.

The 42nd SDCCU Holiday Bowl will kickoff on December 27th at 7:00 p.m. CST and will be televised on Fox Sports 1.