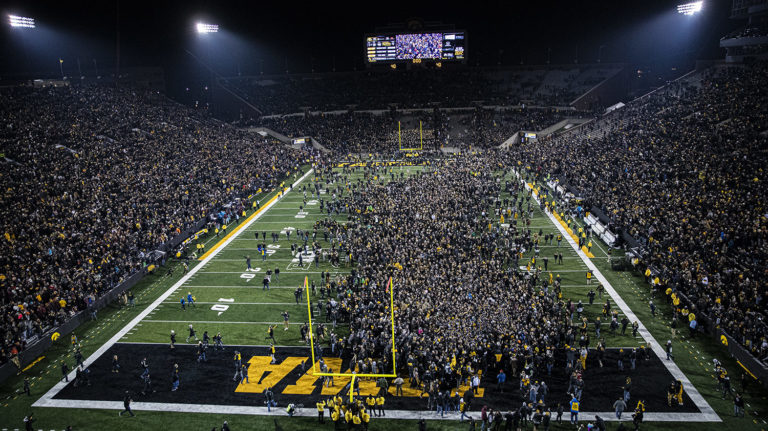 All week moral seemed to be at a low-point for the 2019 season as Iowa yet again whiffed at the chance to vault themselves towards a Big Ten West championship. While the overall outcome in Madison was disappointing, there were still positives to take away.

Nate Stanley played his best half of football in the second half and the offensive line handled a deceiving Wisconsin front rather well for most of the game. But after such a disappointing loss, many wondered how Iowa would respond, especially with a 9-0, top ten Minnesota team coming into Kinnick with the Floyd of Rosedale on the line.

They answered with their gutsiest performance of the season.

The Hawkeyes came out swinging on their first drive, which was showcased with a beautifully designed play that saw Tyler Goodson take a weak-side quick pitch 26 yards and gave a spark to the offense right away. Five plays later, Nate Stanley hooked up with Nico Ragaini for the first touchdown of the day.

“To be honest I usually don’t get the ball on that play, so sometimes in practice, I’m a little lazy and I don’t run it hard,” Ragaini said. “But today, something told me to run it hard, I ran it hard and Stanley threw me the ball.”

Stanley continued to build off of his good second half against Wisconsin as he finished the day 14-23, 173 yards and two touchdowns. What may be most impressive is the fact Stanley had been practicing all week with little to no voice due to a cold.

“Obviously you wish you could control when you get sick or not, but I just have to do whatever I can to be ready to play,” Stanley said. “Coach Foster was giving me remedies on tea and things like that to help my voice out.”

Brian Ferentz appeared to have the perfect remedy for the Iowa offense as they kept the Minnesota defense off-balance with an equal spread of the pass and run, which is a big reason why Iowa went into the halftime locker room with a 20-6 lead.

However, adversity wasn’t anything new to Minnesota as they have been fighting it it all season.

After failing to put the ball in the end zone in the first half, the Gophers marched down the field and scored on a touchdown pass from Tanner Morgan to Tyler Johnson to open the second half.

It was on like the break of dawn from there.

Both teams traded tough possessions throughout the second half, most of the time being unable to score. Perhaps the most bizzare event was the fourth down stop Iowa had backed up inside the 10-yard line.

The end of the play had offsetting unsportsmanlike conduct penalties on a late hit from freshman Dane Belton and Minnesota head coach PJ Fleck sprinted onto the field to check on his player when a time out had not been called.

“The play is over the second the ball hits the ground as an incomplete pass. The ruling was enforced correctly.”

That would be the closest Minnesota would get to the end zone before scoring a touchdown with three and half minutes to go in the game to pull the score within four. But mere seconds later, momentum swung back to Iowa as Minnesota kicker Brock Walker hooked the extra point wide left.

The Iowa offense could not muster a first down and were forced to punt, which left the fate of the game in the hands of the defense. A fate that junior defensive end AJ Epenesa was not about to let go in favor of the Gophers.

“We ran games, we had stunts on and everyone was where they were supposed to be and I was just another piece of the puzzle,” Epenesa said. “Whoever made the big play, we’re happy, we’re gonna celebrate because we’re gonna win the game off those big plays.”

Epenesa finished the game with 2.5 sacks, including hurrying Minnesota quarterback Tanner Morgan into a sack from Joe Evans. Epenesa then followed up on the next play by sacking Morgan by himself, which knocked Morgan out of the game with an injury.

The game was sealed when the Gophers backup quarterback Cole Kramer was picked off by Riley Moss with 46 seconds to go. Two kneel downs ran the clock out on Minnesota’s dream season, a dream that died in a sea of black as fans stormed the Kinnick Stadium turf, celebrating another Iowa win against a top ten opponent.

“When you lose, it’s hard. I’m an older guy right now, I’ve been coaching a lot of games and had my ass kicked plenty. But you feel bad for your players,” Ferentz said. “I’m just happy this team, this ’19 team, got to experience one of those. We’ve come up short three times now, so it was good to finally push one through.”

In a season that had harbored a lot of disappointment, it’s OK to sit back, enjoy and savor this one for a little while.