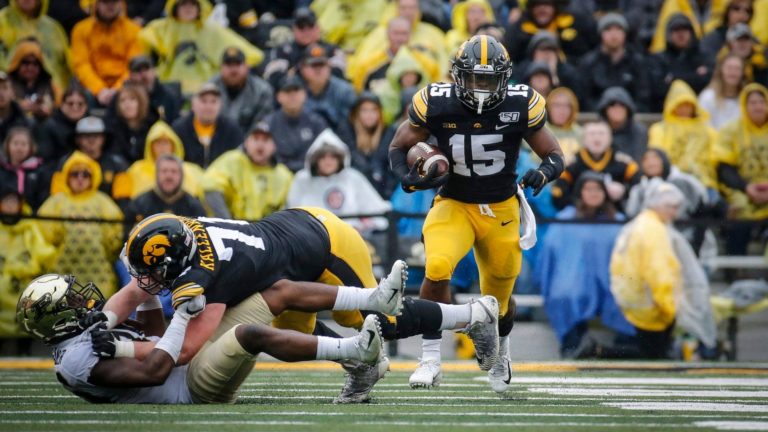 A chorus of boos rained down on Iowa at the end of the first half as the Hawkeyes ran the clock out a 9-7 halftime lead. It was a half that had Iowa reach or cross the Purdue 25-yard line three times.

It only came away with three, Keith Duncan field goals. Iowa head coach Kirk Ferentz shared some frustration on how the half ended for his team as well.

“I was a little ticked, we must’ve had a lack of communication on the kick return,” Ferentz said. “I thought it was a returnable ball and we fair caught it, but that’s one more thing we better get cleaned up. I was not in a good mood at that point, quite frankly.”

Ferentz’s mood would improve throughout the second half as his offense finally showed signs of life, scoring on their first and last full drives of the half. Their first score came on a one-yard, over the top touchdown run by freshman Tyler Goodson, the first of his Iowa career.

The second and final touchdown came via junior Mekhi Sargent, who carried the ball twice for 35 yards on the drive after a Purdue onside kick and ensuing penalty. While the rushing game wasn’t completely fixed with this game, it showed that they could still hang tough and wear down the opposition.

“It’s awesome, it’s a four quarter game and we’re going to keep getting after them,” said redshirt freshman center Tyler Linderbaum. “I thought our run game got better as the game went, and it showed. Great running by Mekhi and great blocking by the line.”

“That was great. Everybody in the stadium knew what we were going to do there,” Ferentz said. “It was really big and pleasing and hopefully we can just keep pushing forward here and build off that stuff.”

The star of the day for the Iowa offense, however, was junior receiver Brandon Smith, who surpassed the 100-yard receiving milestone for the first time in his Iowa career. Unfortunately, Smith exited the game in the third quarter due to an ankle injury. Kirk Ferentz said the original prognosis was good and believes Smith suffered a bone bruise.

Fellow receiver Tyrone Tracy Jr., gave big props to his junior teammate, who was not available for comment due to his injury.

“He did outstanding, that’s really the only word there is to describe what he did today,” Tracy Jr., said. “He made big plays when we needed them and he did what he normally does on the field.”

While the Iowa offense began to re-find who they want to be, everybody knows what the Iowa defense is… and they are elite.

While Purdue was still able to throw the ball for 327 yards and two touchdowns, they did so on 50 pass attempts, and were only 6-of-16 on third down in the game.

Perhaps the play that turned the tide of the game was the interception made by sophomore cornerback Riley Moss, who had just relieved Matt Hankins to start the drive.

The play lead to Iowa scoring their first touchdown of the game, and only just their second touchdown in the last 10 ½ quarters of play.

Iowa only registered one sack on the day, but continuously pressure Purdue backup quarterback Jack Plummer all afternoon, knocking down the redshirt freshman quarterback numerous times.

The lone sack went to former Dowling Catholic star John Waggoner, who registered his first sack as a Hawkeye.

“It was real surreal, to get out there and make that play, but I gotta give it up to my teammates,” Waggoner said. “They held him up and there was great coverage on the back end.”

Even though the offense struggled for a good stretch of the ballgame, junior kicker Keith Duncan booted through four field goals on the day, which currently gives him the lead for field goals made among all FBS kickers with 18.

“Of course, we’d rather kick extra points, but it’s fun to go get field goals out there,” Duncan said. “It’s a great job of our offense to go out there and get us in a position to get some points.”

Iowa travels to Northwestern next Saturday for a date with the Wildcats, a team they haven’t beaten since 2015. The Hawkeyes may have a bit of a boost thanks to #6 Wisconsin’s shocking upset-loss against Illinois.

“Obviously going to there place, it’s another Big Ten team, so records don’t really matter,” Linderbaum said. “You’re going to face tough competition every game, and we know that. So we’re going to have to learn from this film, build off of it and be ready for Northwestern.”

Iowa kicks off in Evanston at 11 AM next Saturday with a TV station yet to be determined.