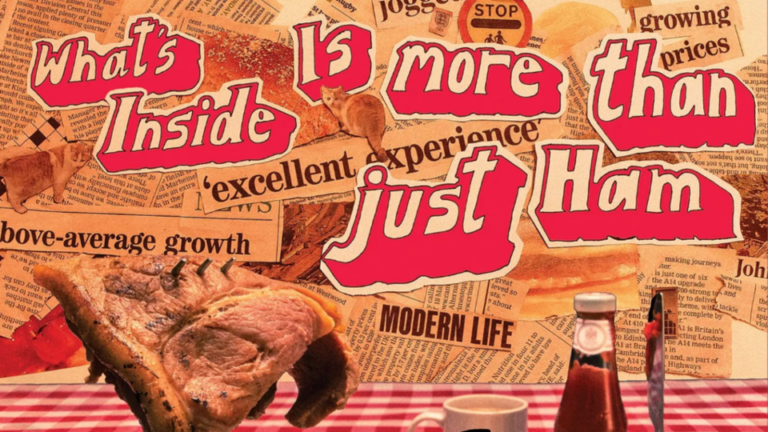 What’s Inside is More than Just Ham is the debut album from UK rock band FEET. The band gained a lot of attention for their singles such as “Ad Blue” and “Petty Thieving” which increased hype for their debut album. In this case, the hype was warranted as I thoroughly enjoyed the album. With the sounds of late 2000’s/early 2010’s synthy and melodic Alternative Rock that we came to know from bands like the Arctic Monkeys, The Strokes, and Franz Ferdinand. Songs such as “English Weather” and “Dog Walking” show off the band’s synth guitars and poppy sounds while tracks later in the album take a step away from the synth while still maintaining the sound throughout the whole album.

Another intriguing aspect of the album is the progression on songs like “Good Richard’s Crash Landing” and the title track. On the former, the song changes drastically, so much so I thought the song had switched to the next one at one point. The tempo picks up as the song acquires different chords, a new drumbeat, and an entirely different sound before slowing back down into the same sound we heard at the start.  The title track also plays a similar trick, switching around at the three-minute mark into a malt shop, fifties sounding tune.

The lyrics of the album are entertaining and in many ways, comedic with the song “English Weather” fully representing that. The song details how it’s too hot to walk your dog, mysterious bites all over, and how you are bound to see some pasty skin. The title track sings about a hot dog looking for a bun which I believe is a song about finding a lover, but I’m still unsure. Nonetheless, the song is very entertaining in a quirky kind of way. The choruses for most of the tracks are catchy and easy to sing along with as well, which helps this album move quickly.

While I do enjoy the album overall, that doesn’t mean there aren’t any bad parts. My least favorite tracks are “Outer Rim” and “Petty Thieving” not because those tracks are just flat out bad but, when you sandwich these two fast-paced, more traditional rock (and almost punk) music between two slower, more melodic pop rock songs it comes off as a little abrasive. While “Petty Thieving” is still a good song, I did not enjoy “Outer Rim” nearly as much. On top of being out of place with the rest of the album, it also didn’t have a catchy chorus like the rest of the album did and I think the song just missed the mark.

After giving this album a few listens over the past week, I did find myself liking some of the songs more and more. Even songs I was unsure of at first, were more enjoyable on a second listen. However, I don’t think this is going to be an album I talk about as one of my favorites of the year, but rather one where I listen to a few of my favorite tracks occasionally. That being said, I still did enjoy this and I did add it to my Spotify playlist. I believe FEET showed some potential and I will definitely check out their next project to see how they’ve improved their sound.