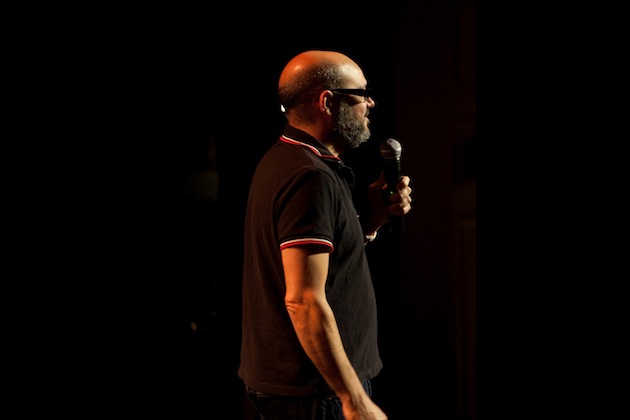 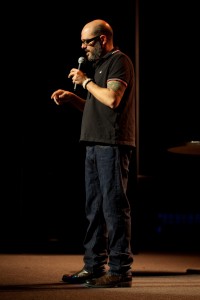 Friday, March 30 at The Englert Theatre was a once in a lifetime experience as David Cross assembled an all-star group (including Jon Benjamin, Jon Glaser, and Mary Lynn Rajskub), to perform a unique comedy show.

The crowd erupted when David Cross hit the stage to introduce his show. Cross went on to explain whom the show would be featuring while cracking a few jokes. The first act that Cross introduced featured Jon Benjamin and Jon Glaser.

Jon Benjamin and Jon Glaser entered the stage for the most memorable act of the night as the “Fuggedabuddies”. Their act consisted of an improv sketch inspired by the catch phrase “forget about it” from the film Donnie Brasco. The two went on to rip on audience members, endorse their “Fuggedabuddies cologne”, and talk about being Jewish. By the end of this hilarious performance, the two had the crowd yelling, “forget about it!” for the rest of the show.

What do you get when you have David Cross, Jon Benjamin, Jon Glaser, and Mary Lynn Rajskub act out scenes from a movie script written by an illiterate cocaine addict? Pure comedy. The group acted out a couple scenes from this hypothetical movie, while playing the roles that the writer intended for each character (David Cross had to play the role of Cocaine as Samuel L. Jackson), and not correcting the horrid grammar while reading the script.

The show seemed to have been cut short because of time restraints, as David Cross announced at the end of the show that he was unaware of the time limit. Nevertheless, the show ended with Cross and Benjamin showing a pilot they created that aired on Comedy Central. The clip was a fake infomercial selling ridiculous products and it aired in the middle of the night on Comedy Central. Cross explained that the point of the clip was to leave the viewers asking, “what the hell was that?”

As David Cross thanked the audience at the end of the show, he yelled, “Iowa City, we’ll do this again!”