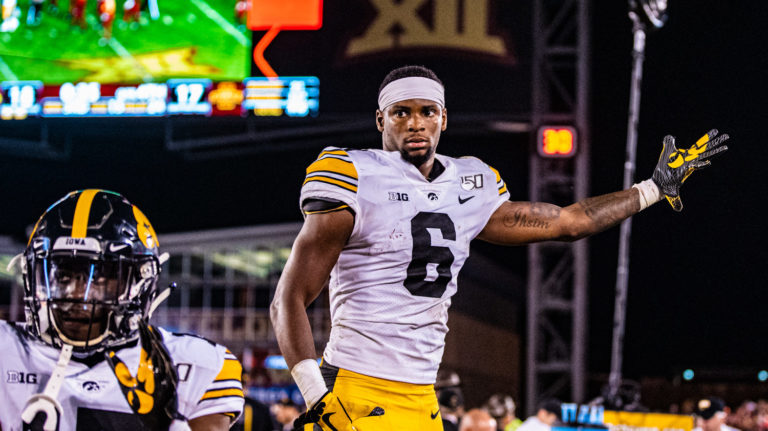 It was two hours and 55 minutes…no, not the game length. That was the total time each team spent in the locker room due to severe weather in the Ames area on Saturday afternoon.

In any normal Saturday, the lightning delay would’ve been the big story. But, with College Gameday, A quirky game, and a group of students storming the field during the delay, it was an act in a four-part play.

The 19th-ranked Iowa Hawkeyes took down Iowa State for their fifth straight win in the Cy-Hawk Series. The final score was as quirky as the game itself: 18-17.

A game like today is something Kirk Ferentz doesn’t usually have to prepare for. “In baseball I guess it’s easy,” Ferentz said. “They go in and play cards, they’re used to rain delays, it’s unusual for us.”

Saturday’s Cy-Hawk game turned into another classic Kirk Ferentz game in his tenure at Iowa. The Hawkeyes played field position in the 2nd half, and eventually flipped the field in their favor.

But it all began to turn for the Hawkeyes around the midway point of the 3rd quarter, when Nate Stanley ripped a 27-yard completion to Ihmir Smith-Marsette on a 3rd and 22 conversion.

“We had ran the play a lot in practice and we felt confident in it,” Stanley said. “They gave us the right coverage for it, so there wasn’t much thinking involved, I just went and ripped it.”

That play helped Iowa drive down the field and convert one of junior Keith Duncan’s four field goals on the night, a performance that may garner him All-Big Ten honors this week.

Duncan and Stanley were a couple of the few bright spots in an otherwise ugly game for Iowa. Ugly also could be used to describe the Iowa secondary, which is down four of their top six defensive backs.

However, after rough a rough first half, players like DJ Johnson and Jack Koerner batten down the hatches and pull together to make big plays in the second half, including a crucial pass breakup in the fourth quarter.

The Iowa rushing attack managed to put in another 100+ yard effort thanks to contributions from Mekhi Sargent and Tyler Goodson among others. 100+ yards as a team may seem low, but against a stout Iowa State defense, they needed every yard.

It appeared early on that Iowa was in trouble. Following their opening drive field goal and subsequent lightning delay, Iowa State hit Iowa with a Bill Belichick-esque gadget play on a double pass from Brock Purdy to DeShaunte Jones and a bomb to La’Michael Pettaway.

Following the two hour lightning delay, Iowa managed to march downfield and tack on a field goal at the end of the half. It looked as if Iowa might have found their footing.

However, Iowa State came out a bombed Iowa again, this time a 71-yard touchdown pass from Brock Purdy to Tarique Milton to put Iowa State up 14-6. Iowa was on the ropes.

That was when Nate Stanley hit Ihmir Smith-Marsette with a Brett Favre-like 27-yard gain on 3rd and 22 for a massive 1st down and the turning point in the ballgame as Iowa would tack on another field goal.

The game then began to play into Kirk Ferentz’s hands as Iowa flipped the field in their favor. Following a Nico Ragaini punt return to the Iowa State 25, Stanley punched in a quarterback sneak from a yard out to give Iowa a 15-14 lead.

Iowa State would respond with a 26-yard field goal from Connor Assalley to put the Cyclones back up 17-15. Iowa would need to set up Keith Duncan once again.

In a drive highlighted by Nate Stanley’s big throw to Brandon Smith, Duncan hit his forth field goal of the night to give Iowa an 18-17 lead with 4:51 left in the fourth quarter.

Both teams couldn’t do anything on their next two possessions, Iowa State turned it over own downs and Iowa went 3-and-out and was giving Iowa State the ball with 1:45 to go.

That was when Cy-Hawk happened.

On the play, Datrone Young was trying to get Iowa’s Terry Roberts out of the way of Deshaunte Jones. Young ended up running into Jones, where the ball hit off of his back and was recovered by Iowa’s Devonte Young.

The play ended the game and gave Iowa their 5th straight win over Iowa State. In a day that had the hype of Gameday, the drain of a weather delay and the bewilderment of the students storming the field can all be summed up in one sentence.