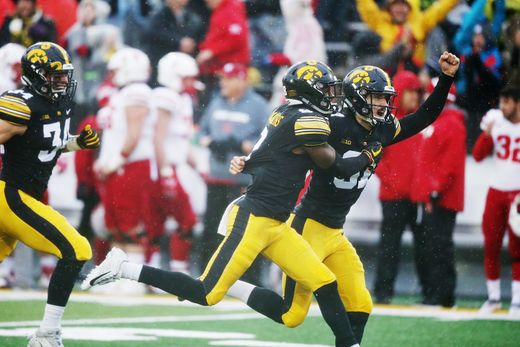 Miguel Recinos had watched one miss the uprights earlier in the fourth-quarter: “It all started with my hips when I missed that first one…I struck the ball really well, it just didn’t behave the way I thought it would,” the senior kicker from Mason City said. But following Nate Stanely’s pass to T.J. Hockenson to convert a 4th and 8 on Nebraska’s 37-yard line, Recinos had a chance at redemption. He did not disappoint.

Recinos drilled a 41-yard field goal as time expired to give Iowa it’s fourth straight win over division-rival Nebraska, 31-28. In the following mayhem that ensued on the field, Iowa head coach Kirk Ferentz was accidentally head-butted by Iowa quarterback Nate Stanley and suffered a couple of cuts on his face. “Our players saw Creed II on Wednesday night after our Thanksgiving dinner, and I promise you I was not in the movie or trying to duplicate it,” Ferentz quipped in his post-game press conference.

The Hawkeyes got out to a fast start in the first half following a pregame scuffle while both teams began stretching, starting off with an 11-play, 79 yard drive capped off by a 15-yard touchdown pass from Nate Stanley to Brandon Smith. Nebraska marched back down and scored on 4-yard pass from Adrian Martinez to Jack Stoll. Iowa would answer right back with two more touchdowns before half, one from Toren Young, the other from Mekhi Sargent.

Sargent and Young were the workhorse for Iowa on Friday as the Hawkeyes rolled up 266 yards rushing on the porous Husker defense. Mekhi Sargent rushed for a career-high 173 yards and scored two touchdowns, Toren Young added another 83 yards and a touchdown. It was much-welcomed appearance of an Iowa running game that seemed to be lacking for most of the season.

After halftime it appeared Iowa was well on their way to another dominating victory against the Huskers as Stanley hit Mekhi Sargent for a 5-yard touchdown to give Iowa a 28-13 lead. Iowa’s defense, which had great individual efforts from Matt Hankins, Anthony Nelson and A.J. Epenesa forced another Nebraska punt. Iowa would march the ball inside the Nebraska five before getting denied on a controversial fake field goal attempt.

It proved to be the open door the Huskers were looking for, marching the ball 98 yards, converting three, fourth downs in the process, and striking on a 28-yard touchdown pass from Adrian Martinez to Maurice Washington.

Many Iowa fans feared of memories from the Hawkeyes 2014 collapse against Nebraska, which saw the Huskers come back from a 24-7 deficit to beat Iowa 37-31 in overtime, as Nebraska tied the game following a touchdown rush from Martinez and a completion to redshirt freshman receiver Kade Warner, son of former UNI quarterback and NFL Hall of Famer, Kurt Warner.

It appeared as if Iowa was doomed for another collapse, like the many they had suffered throughout the 2018 season. However, that’s when Nate Stanley flipped the script and completed the 4th and 8 pass to T.J. Hockenson for the first down, setting up well inside Miguel Recinos field goal range. Recinos then sent himself and 13 other seniors out as winners, and undefeated against the Huskers.

Iowa SID Steve Roe announced to the media that a bowl announcement is expected next Sunday, following the results of the conference championship games across college football.