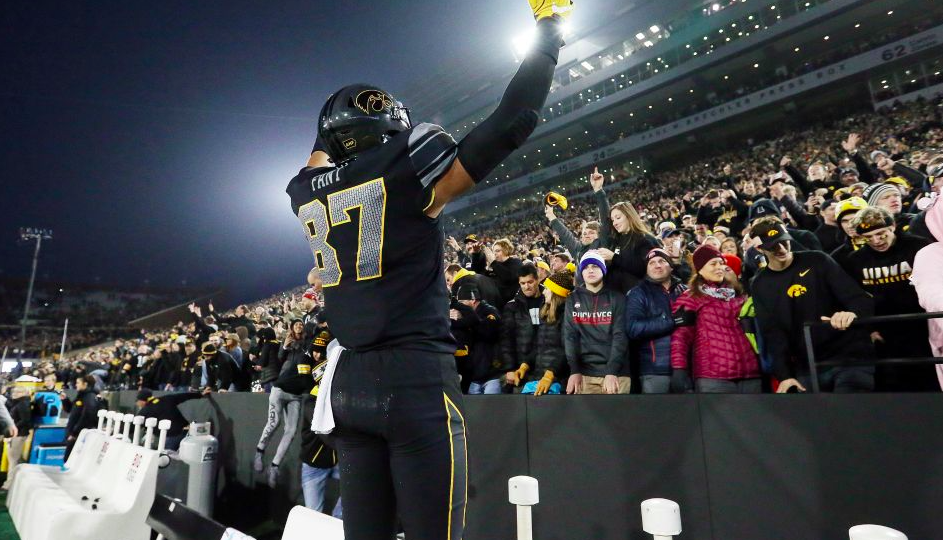 IOWA CITY – It was a night unlike any other. We’ve seen upsets. We’ve seen blowouts. But nobody could have predicted a game like this one.

Ranked third in the AP poll and sixth in the College Football Playoff race, the Ohio State Buckeyes came to Kinnick Stadium for the first time since 2010. Having won each of the last five games over Iowa and 13 of the last 14, they had to feel good about being a 20.5point favorite.

The winner? Not the Buckeyes.

Donning alternate uniforms for the blackout, the Hawkeyes played a complete game in every capacity – offense, defense, and special teams – as they not only knocked the Buckeyes down, but knocked them out cold.

From the game’s first play, you knew something was up. Amani Hooker picked off Ohio State quarterback J.T. Barrett and took it back 30 yard for a pick six.

“It certainly helped and got our fans even more juiced up,” said Iowa head coach Kirk Ferentz. “They were ready to go.”

Barrett responded, and led the Buckeyes down the field on the next possession, hitting Terry McLaurin for a 29-yard touchdown pass.

The teams traded field goals and were tied at 10 after one quarter.

From that moment on, a switch was flipped, a switch nobody knew the Hawkeyes had.

Iowa outscored Ohio State 21-7 in the second quarter and took at 31-17 lead to the locker room. Nate Stanley through three touchdown passes in the quarter, one to T.J. Hockenson and two to Noah Fant.

The second pass to Fant came with less than a minute before halftime and was set up by an interception from Josh Jackson.

Ohio State, who boasts one of the most productive and efficient offenses in the country would get going though, right? Surely the second half would be better.

Not the case. In fact, it was worse.

“You’d better be playing with your foot on the gas because these guys can close the gap pretty quickly, and I think our players understood that,” Ferentz said. “It’s one of those things that if you’re not going full speed, this thing could change quick.”

The Buckeyes failed to score in the third quarter, as Barrett and the offense couldn’t crack the code that was the Iowa defense. Each team punted twice before the Hawkeyes marched into Buckeye territory half way through the period.

On fourth and three at the Ohio State 20, the Hawkeyes trotted out the field goal unit. With an audible, kicker Miguel Recinos was split out wide with the offensive line. Only long snapper Tyler Kluver and holder Colten Rastetter were left in the middle of the field.

Rastetter took the snap and immediate fired it right back to Kluver, who had raced straight up field past a defender. The “pole cat” play gained 18 yards and set up Iowa at the 2.

On the next play, Stanley found Hockenson in the end zone for six, pushing the lead to 38-17 with just under seven minutes to play in the quarter.

On the play, an Ohio State defender had fallen at Stanley’s feet and latched on to his left leg. Stanley settled, and fired across his body to Hockenson, showcasing the arm strength.

“That’s just part of being a quarterback, sometimes you have to make plays when they’re necessary,” Stanley said. “T.J. made a great adjustment. He saw it, he put his arm back inside, and I trusted that he would be able to wall off that defender and make a play.”

There was no looking back at that point. Iowa’s defense forced four Buckeye punts in the third quarter and allowed just 22 yards of offense.

The rout that nobody saw coming was on.

Showing no signs of letting up, the Hawkeyes scored on the first play of the fourth quarter. Stanley hit Drake Kulick with a two-yard pass for the fullback’s first career touchdown.

So Iowa. Five touchdown passes, four to tight ends, one to a fullback.

Stanley finished the day completing 20 of his 31 passes for 226 yards and five scores.

The Iowa defense was no kinder to the Buckeyes than the offense. Jackson intercepted Barrett twice more in the quarter. First Jackson ripped a ball away from Buckeye receiver Austin Mack, then with just under 10 minutes to play, Jackson made an acrobatic one-handed catch that you’ll be seeing on highlight reels for the rest of the season.

At the start of this week, Jackson was being talked about as a potential first round NFL draft pick. His performance against a stout Ohio State team may have solidified that. Jackson leads the FBS with 20 passes defended and leads the Big Ten with five interceptions.

Barrett entered the game with a 25-1 touchdown-interception ratio, the best in the nation. He was picked off four times Saturday.

Recinos added a field goal, and Toren Young scored his first career touchdown to put the finishing touches on the 55-24 blowout victory.

Ohio State did find the end zone once in the second half. Barrett found Johnnie Dixon for a 22-yard score that was set up by a failed fake punt run from Rastetter.

When it was all over, the swarm was on. Fans piled onto the new Kinnick turf for a party at the tigerhawk.

“Last time I experienced that was Michigan, it was a similar feeling,” Jackson said. “It’s always good to have those feelings for later on in life, that’s something I’ll probably always remember.”

More importantly, no gear was lost.

“I kept my helmet on and strapped it up super tight,” Stanley said.

In last season’s upset win over Michigan, Iowa quarterback C.J. Beathard had his helmet stolen during the swarm. It was paraded downtown for pictures, a tradition that Stanley would not allow to continue this season.

To see Iowa play that well against Ohio State is nearly inconceivable. The Hawkeyes have been known to play well at Kinnick – they’ve won four of their last five home games versus top five teams – but blowing out Ohio State?

“I didn’t think it was going to be a blowout,” Hooker said. “We knew we could win, we just wanted to come out and fight.”

While the team knew they could compete and play well, even they didn’t think they would have such a dominating performance.

“I definitely thought it was going to be a close game not matter what, whether we won or lost,” Josey Jewell said.

The Hawkeyes outgained the Buckeyes 487-371, holding Ohio State 200.3 yards below its season average.

A night no one in Iowa City will soon forger further cements the legend that is Kinnick Stadium in October and November.

Do you have title hopes? Don’t bring them to Kinnick. They won’t make it out alive.