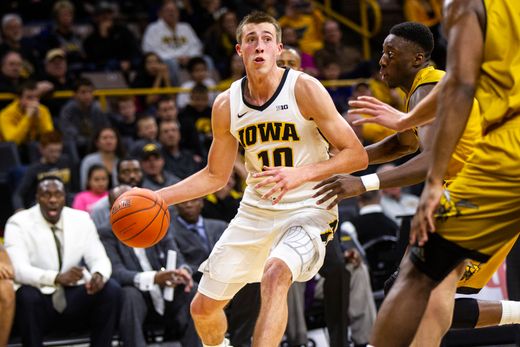 There was no question about it, from start to finish, Iowa dominated the lowly Alabama State Jaguars from the Southwest Athletic Conference. The Hawkeyes led for all 40 minutes of basketball and put a massive hurt on the boys from Montgomery in their 105-78 win on Wednesday night. “I didn’t think we would come out in any way, shape, or form not ready to play this game,” head coach Fran McCaffery said “Alabama State played Iowa State, they played South Dakota State tough and they won their two Non-[Division] ones.”

The Hawkeyes started off lightning quick as they ran out to a 17-4 lead by the Under-16 media timeout. It would only get worse from their. Luka Garza led all scorers with 22 points, going 8-8 from the field and going 5-6 from the free throw line.

“I play as hard as I can, my teammates were finding me in open spots, and my jump shot felt really good,” Garza said of his consistency. “I worked really hard all summer to have a consistent three-point shot, so that felt great as well.”

Right behind Garza in the score column was star freshman Joe Wieskamp, who dropped 20 points on the night, with 18 coming in the first half. “He was really aggressive tonight and that’s what we want him to be,” Fran McCaffery said of Wieskamp. “He puts it on the deck, shoots the three, and is aggressive on the glass. He is versatile.”

Garza and Cook led the Hawkeyes in scoring with Tyler Cook trailing behind with 15 points and a couple of nice dunks in the half-court set. Isaiah Moss, who had struggled in New York during the Empire 2K Classic, came to life in front of the home fans, scoring 15 points, knocking down three of four, three-pointers, and a beautiful fast-break dunk in the first half.

“Now Moss with the steal – SHOWTIME!”@IowaHoops jumped ahead 12-0 on this slam. pic.twitter.com/qzbYiU9WtH

It was also a big night for the Iowa walk-ons as all four of them saw playing time: Riley Till, Austin Ash, Nicholas Hobbs and Michael Baer. Austin Ash scored his first career points as a Hawkeye on three-pointer with 4:17 to go in the ball game, and the crowd very nearly took the roof off Carver-Hawkeye Arena is Ash’s follow up three-pointer would have fallen.

Iowa now begins a crucial four-game stretch starting with their matchup against the Pitt Panthers in the Big Ten-ACC Challenge on November 27th. “You’ve got four monsters coming up, but I don’t look at it that way, I look at it as one monster coming up, and we’ll worry about the ones after that,” Fran McCaffery said of the four-game slate against Pitt, Wisconsin, Michigan State and Iowa State.

Iowa’s next match-up is against Pitt in the Big Ten-ACC Challenge on Tuesday, November 27th at 8:00 PM on ESPNU.