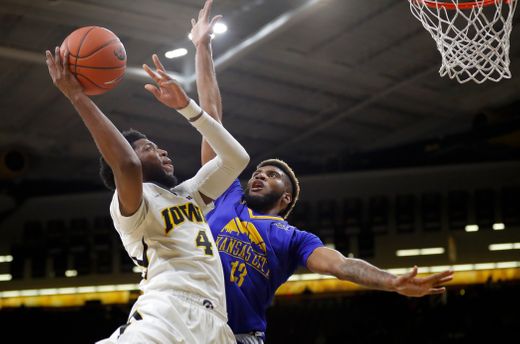 A big question mark for Iowa coming into the 2018-19 season was how much they improved defensively. Last season, the Hawkeyes were one of the worst teams defensive in the Power 6 conferences in college basketball, with only Oregon State having a worse rating according to Ken Pomeroy’s rankings.

Thursday night, the Iowa offense was struggling, at halftime the Hawkeyes were only 8-25 from the field, shooting 17 threes in the process. “In the first half, we took 17 threes and eight two-point shots, So I was really disappointed in that aspect, I thought we had an advantage in the post offensively, I know I wanted to try and exploit that but we were jacking threes”, Fran McCaffery said of the first half shooting.

Iowa turned to their defense in their 77-63 win over the UMKC Kangaroos, “It was kind of funny, we kind of joked around about it in the locker room,” junior forward Ryan Kriener said. “This was kind of the first time that offense has been our problem, our offense was a little stagnant and our defense really held us in there”. Kreiner played 16 minutes and was very effective on the defensive end, adding eight rebounds to his six points.

The game also marked the official debut of freshman guard Joe Wieskamp, the former five-star recruit from Muscatine High School was the Hawkeyes leading scorer with 15, including four, three-pointers in the first half.

“Being here since June, going up against the guys every day, I think you just adjust,” Wieskamp said of his adjustment to the college game. Wieskamp also showed his great athleticism with a beautiful putback dunk in the second half that received a rousing cheer from the Carver crowd of 9,317.

Junior guard Maishe Dailey also played a big role off the bench against the Kangaroos as he scored 11 points. “We just needed to bring intensity, we felt like we got hit in the mouth in the first half so we just wanted to bring that fight and we reciprocated that fight in the second half,” Dailey said of Iowa’s performance.

Dailey also believes he’s transitioned into the role of “Defensive stopper and defensive leader,” and if he in fact has, would be a huge boost to this Iowa team.

Next in the scoring column was Maishe Dailey, who had 11 points with two assists to boot. Sophomore Luka Garza added eight points and three rebounds and freshman Connor McCaffery contributed seven points and three assists.

Iowa’s next action is Sunday afternoon against Wisconsin-Green Bay, tipoff is at 2 P.M. local time.