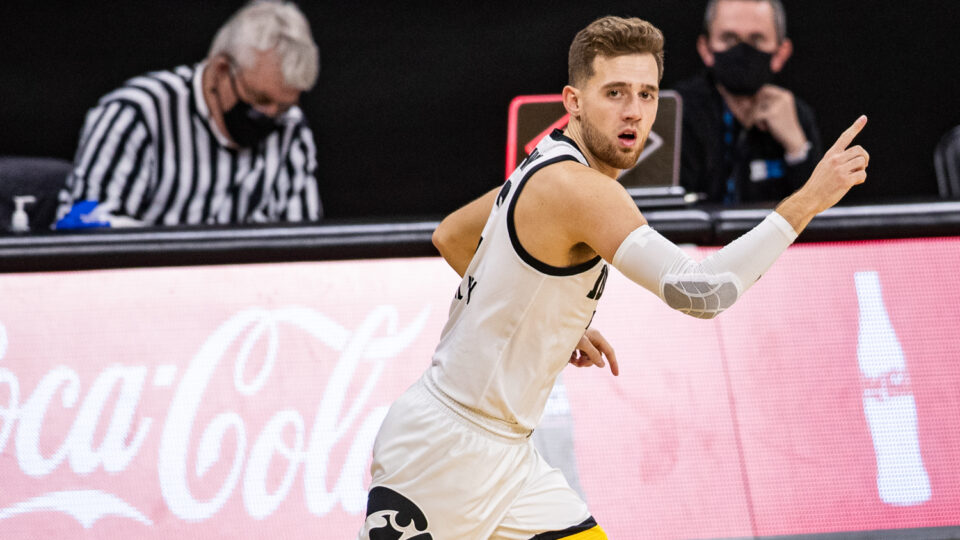 The last time an Iowa men’s basketball team beat Purdue, Jordan Bohannon was a wide-eyed freshman who was still cementing his role into the starting lineup for an extremely young Iowa team in the winter of 2017. Iowa beat #17 Purdue 83-78 in Carver-Hawkeye Arena in January of 2017.

Four years later, the Hawkeyes came back into Carver-Hawkeye Arena with a ranking of #4 in the country, looking to snap a four-game losing streak against Matt Painter’s Boilermakers. In fact, the Hawkeyes haven’t come close to beating Purdue in the four meetings since January 2017, with an average margin of defeat of 21 points in that streak.

“My first two years, they’ve embarrassed us. Every time I’ve played them they’ve outhustled us, they’ve destroyed us on the glass,” junior guard Joe Wieskamp said. “This was one we really wanted to send a message against a good Purdue team, and we did a good job.”

Wieskamp continued his high-level of play on Tuesday night, as he poured in 17 points and nine rebounds just three days after dropping 20-9-4 against top-ranked Gonzaga in Iowa’s 99-88 loss to the Bulldogs at the Sanford Pentagon in Sioux Falls.

The Hawkeyes also enjoyed another 20+ point performance from Luka Garza, as the senior post recorded his 17th straight Big Ten game with 20+ points. His streak matches the 17-game streak that former Ohio State star Dennis Hopson went on back in 1987.

Garza buried four threes in the contest, the final giving Iowa a 12-point lead with 2:28 to go in the game and the image of Garza making the shot with gauze up one of his once-bloodied nostrils served to be more than popular on social media.

“I thought tonight, we had open looks because he loaded people up. In and out. He made good decisions when he shot it,” Fran McCaffery said about Garza. “He was really good defensively and on the glass. Sat for a little bit with that third foul, and we got him back in there and he was able to finish.”

Iowa’s win against Purdue was the first time the Hawkeyes had begun the Big Ten slate 1-0 since 2015, when it beat then-#1 Michigan State at Carver to start a meteoric rise that saw that year’s squad rise to a #3 ranking at one point during the conference slate.

The Hawkeyes were ranked #3 when they took on #1 Gonzaga on Saturday in Sioux Falls. But, while Iowa fell to the nations top-ranked team and slid to #4 in Monday’s AP Poll, Fran McCaffery was not worried about his team’s ability, or inability, to avoid an emotional let down against the Boilermakers.

“We don’t let it linger. Let’s say make we won the game. Last two days we would’ve been ranked No. 1, everybody would’ve been saying how great we are. And we’ve got to battle Purdue,” McCaffery said. “

“We know what playing Purdue is like. They kicked us twice last year. So I think a team’s ability to understand that is going to be the key to success for the rest of the season.”

Perhaps the biggest key in the Hawkeyes win on Tuesday was their performance defensively. Following facing a Gonzaga offense that ripped Iowa’s defense to shreds, the Hawkeyes held Purdue to 55 points on the night. In the four previous matchups, Purdue averaged 88.5 points in those contests.

“It was by far our best effort on the glass and defensively,” Fran McCaffery said. “I thought we were pretty good — really good actually — against Carolina. We were locked in.”

With the performance, Iowa’s adjusted defensive rating went from 83rd to 62nd in the nation according to Ken Pomeroy. The rating is by far the worst for any team in the AP Top 10, but with the #1 Adjusted Offense in College Basketball, a rating in the mid-60s is all Iowa needs to be an elite basketball team.

Iowa will hit the road in Big Ten play for the first time this season as they take on border-rival Minnesota at Williams Arena in a Christmas Day matchup. The Hawkeyes were 2-0 against the Gophers in 2019-2020.