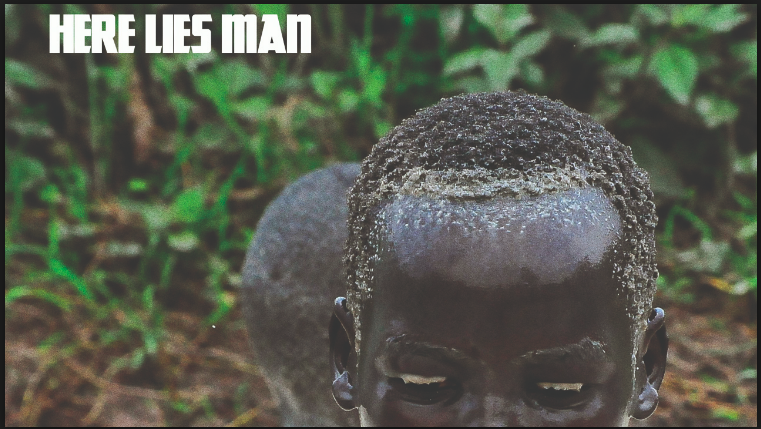 Here Lies Man hit the scene with their explosive, self-titled debut album in 2017 and haven’t slowed down since. Often described as Black Sabbath playing afrobeat, the quartet plowed through their set with riff-heavy psychedelic rock and distorted vocals that give their experimental style a genuine sense of chaos and intensity, like a crowded street about to break into a riot.

The band plays to an audience of a little over fifty people standing shoulder to shoulder in Gabe’s. Despite being easily categorized as a metal band, this isn’t music made for people to leap into a mosh pit. Here Lies Man opts for an easy groove and basslines that’ll rattle your teeth and gets the crowd bobbing their heads to the beat instead of dancing.

A projector sets images against the back wall of the stage of Jackson Pollock-esque designs: splashes of color that are continually shifting in both pattern and hue. Over time, the color and form slowly fade away until there’s nothing but static before snapping back into a vibrant green for the final song. This adds to the low-fi stage presence and gives the audience visual stimulation they otherwise wouldn’t have considering the people on stage aren’t moving all that much.

About fifteen minutes into the set, frontman Marcos Garcia pauses to talk directly to the audience, the only time he does so before saying goodnight at the very end of the set. He says, in a quiet, almost shy tone of voice, “We like to take this time in the show to explain what it is we’re doing here. This is the soundtrack to a movie. The soundtrack to the move we live every day. Thanks you for coming out and supporting live music and music festivals. . .this is how we stick together during tough times. With that said, this is the part of the movie where everything goes wrong.” Then the band drops back into their set and don’t stop again for 45 minutes.

They have a couple of solos which start out fun but go on just too long to the point that they feel a little tedious. Even when they are clearly playing songs and not just providing a backdrop for each other to improvise to, they rely heavily on guitar riffs. This is obviously on purpose since Here Lies Man is very vocal about their Black Sabbath influences but I think it makes their tunes feel somewhat samey and doesn’t allow for enough variation in style. However, you can’t deny that what they come up, even if there is a little too much of it, with is catchy.

Here Lies Man puts on a solid show. I believe the trick to enjoying them is managing your expectations. Don’t think that just because they’re a metal band that you’re going to have the opportunity (or excuse) to leap around like a maniac. They’re good for grooving out and appreciating how what you’re hearing is different than pretty much anything else around right now. While they might not explore that sound to its fullest extent, it’s still plenty fun. Relax, let the movie go wrong, and enjoy what comes with it.