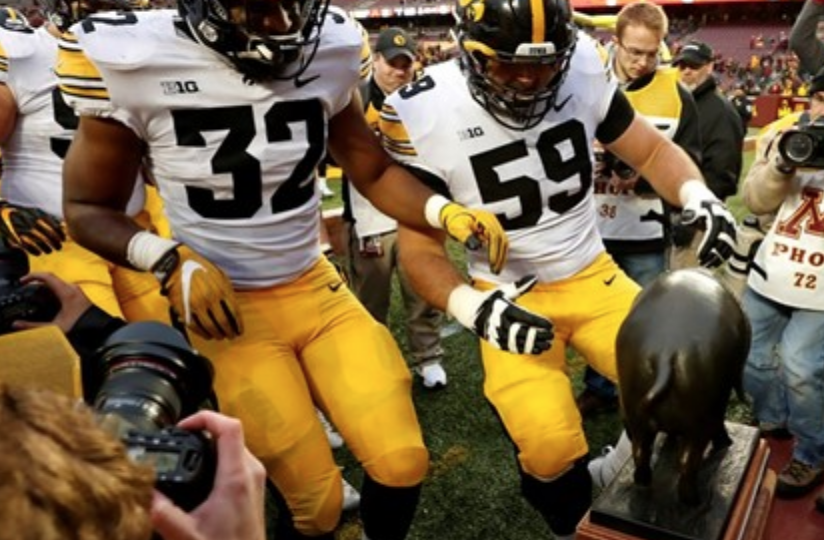 Iowa’s superior defense proved to be just too much for the Minnesota Golden Gophers as Iowa came away with a 48-31 victory over the Gophers in TCF Bank Stadium Saturday afternoon. Colin Shultz has more.

Iowa started two freshman corners in their first game on the road of the 2018 campaign. Both seemed to be up for the challenge. Riley Moss had two picks in Saturday’s game in Minneapolis, and Julius Brents had one interception as well as two pass break ups to help propel the Hawkeye defense and keep momentum on Iowa’s side for the majority of the game.

“Both those guys got picked on a little bit but they kept fighting, kept competing,” coach Kirk Ferentz said. “I thought they played better as the game went on.”

Sophomore safety Geno Stone also had an interception late that sealed the win for the Hawks with less than a minute to go.

Iowa held Minnesota in check for a good portion of Saturday’s game. The Iowa defense ended the day with five sacks, three coming from the big lineman Anthony Nelson.

On the other side of the ball, Iowa looked dominant early offensively. The Hawkeyes got off to a hot start as quarterback Nate Stanley threw a strike to T.J. Hockenson for a three yard score on their first drive, and scrambled around in their second drive to find wide receiver Ihmir Smith-Marsette for a 60 yard touchdown making it 14-0 to start the game.

Iowa later sent shockwaves throughout the stadium when they decided to run a trick field goal on the Minnesota four yard-line: a direct snap to T.J. Hockenson resulting in his second score of the game.

Despite how easy Iowa made it look on some drives, the Hawkeyes made some costly mistakes that set up Minnesota with great field position. The Gophers did a good job capitalizing on those mistakes, keeping this one competitive for a majority of the game.

Nate Stanley threw an interception late in the first half which led to a Golden Gophers touchdown, making it 28-17 going into the half. Stanley was also stripped later in the game, setting up Minnesota on the Iowa three yard-line. Minnesota went on to score and make it a one possession game, 31-24. The Hawkeyes weren’t phased, as they continued to fight and close the game out.

“The turnovers are important,” Ferentz said. “We’re not doing a good enough job on turnover margin at this point… The good news is that we played through the mistakes today.”

Stanley finished overall with a solid game, going 23-39 with 314 yards and four scores through the air, accompanied by the one interception.

“Early I think we just got the passing game going a little bit,” Stanley said after the game. “Saw some things that we liked, and just continued to take advantage of it.”

Iowa looked solid in their first road win of the season. They will look to carry this momentum into next week when they head to Memorial Stadium to battle the Indiana Hoosiers next week.