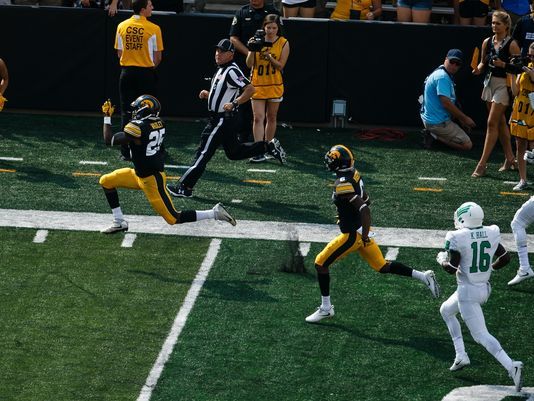 Akrum Wadley high-steps his way to a negated touchdown (HawkCentral)

IOWA CITY, Iowa – This was not your typical Iowa football game.

Iowa received the ball to begin the game and Nate Stanley led an initially impressive opening drive, capped off by a disappointing fumble into the back of the end zone by Nick Easley. This resulted in the Mean Green of North Texas getting the ball, leaving Iowa stunned with nothing to show for its 12-play, 77-yard effort.

On the sixth play of the ensuing drive, Jeffery Wilson of North Texas scampered for a 41-yard score with the Hawkeyes still reeling from the unconventional turnover. Kinnick Stadium fell silent after witnessing Iowa trail despite seeing Nick Easley in the end zone.

On the Hawks’ second possession, Nate Stanley found Akrum Wadley on a wheel route that he took 74 yards to the house. However, en route to his second receiving touchdown of the year, he began to high step. This did not go over well with the referees and it was called back for unsportsmanlike conduct.

“I told [Akrum] he’s too good of a player for that,” Kirk Ferentz, Iowa head coach, said. After the penalty, which occurred late in the first quarter, Wadley only saw two more carries in the game.

After the play was called back, freshman tight end TJ Hockenson caught his first career touchdown pass after the ball was tipped in the end zone. However, the ball wasn’t even meant for him.

“I’m not even a read on that play,” Hockenson said. “I was really surprised when it got deflected and I was just paying attention and was lucky enough to be aware of where it came.” 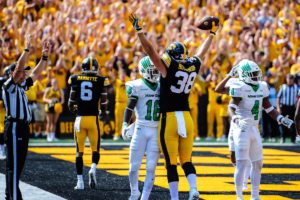 “I’ve never had that,” Stanley, the first-year starter, said. “Usually when they get tipped then they’re intercepted.” The sophomore even admitted that he wasn’t aiming for Hockenson on the play.

In the second quarter, Mason Fine found Turner Smiley on a deep ball to set up the eventual 40-yard field goal attempt. With the Mean Green ready to take the lead for a second time, Josh Jackson happened. His blocked field goal preserved the tie and gave Iowa the ball to march down and take a lead of its own with Miguel Recinos’s 41-yard field goal.

Iowa got the ball back soon after, only to see Stanley fumble the ball. Before the play was dead, the wildest play of a wild day ensued. North Texas scooped up the fumble, rumbled down 27 yards and fumbled once more to give the ball right back to the Hawkeyes.

After trading punts, North Texas began its final drive of the half, trailing 7-10. This possession culminated with three 15-yard penalties, a sideline warning and a touchdown pass from backup quarterback. All the craze put the Mean Green up 14-10 at halftime.

“At halftime it was more of an attitude change,” Parker Hesse, junior defensive end, said. “We had to look ourselves in mirror and decide ‘are we gonna ride the wave, are we gonna be up and down all year, or are we gonna play Iowa football?’” Down at half for the first time on the year, Iowa needed changes to counteract the bad breaks it dealt with in the opening 30 minutes.

“[The locker room] wasn’t in a state of panic, but there were quite a few guys that said ‘this isn’t Iowa football, something’s gotta change,’” Hesse said. He was only Hawkeye to record a sack in the contest.

Whatever it was in the locker room, it certainly helped. The Hawks forced a punt and senior running back James Butler took over on the ensuing possession. On a fourth-and-five, Stanley found sophomore tight end Noah Fant for the touchdown, giving Iowa the lead for good.

“I guess we’re three for three at digging holes,” Ferentz said. “But I thought our tempo improved in the second half.”

The rest of the game was all freshmen backs. Toren Young and Ivory Kelly-Martin both amassed upwards of 70 yards, with the true freshman, Kelly-Martin, scoring twice.

Iowa came out with the win, 31-10, but in the most unconventional way. ‘New Kirk’ went for it on fourth down five times, converting four times. There were four unsportsmanlike conduct penalties and two sideline warnings. Iowa engineered a nine minute drive and managed the clock well.

Penn State is looming and this was supposed to be a tune-up game for the night game against the Nittany Lions, but this contest won’t soon be forgotten. The opening fumble, the halftime deficit, the three touchdowns in a row and everything in between certainly made for a wild non-conference finish.