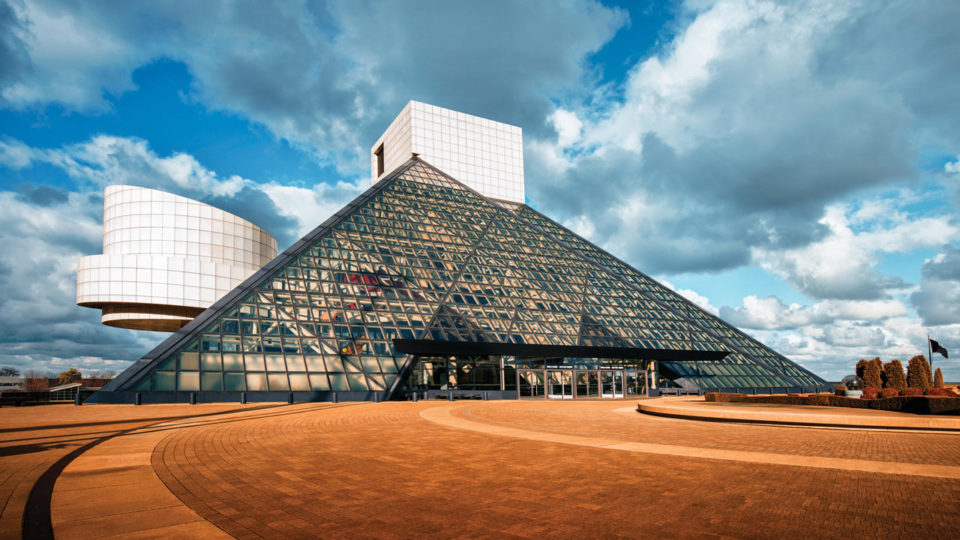 A cousin’s wedding in a nearby town left my family and I to explore downtown Cleveland. Stepping off the plane into the city’s airport, colorful images of The Beatles, Keith Richards, and even Kid Rock papered the terminal walls, all signs pointing to the Rock & Roll Hall of Fame.

The DJ’s setlist at the wedding had consisted mostly of songs hailing from earlier decades, many of which came from artists showcased at the Hall of Fame. It seemed so on the nose. We danced the night away to “Sweet Caroline,” “Shut up and Dance with Me,” and one of my personal favorites, “Livin’ on a Prayer.” If I didn’t know what places to visit while we were in town, I certainly did now.

The location of the museum was up for competition between various cities before Cleveland was awarded the honor by the Rock & Roll Hall of Fame Foundation in 1986. While being a major stop for rock tours and founding the radio station WWMS, what really put Cleveland over the edge in gaining the Hall of Fame was Alan Freed.

Freed was a disc jockey for Cleveland station WJW in the 1950s and 1960s who first coined the term “rock and roll.” Not only did Freed come up with the name, he frequently played the genre on the station and advocated for its expansion.

We later discovered his jukebox shaped tombstone when exploring the expansive and beautiful grounds of the Lake View Cemetery. This 285 acre area contains the final resting place of many historic figures, even a large memorial for 20th US president James A. Garfield.

Recuperating from the unprecedented computerized voice of our rental car practically shouting “narrow lanes ahead,” we exited the highway towards the museum. Located on the west bank of Lake Erie, the building itself is a bit unorthodox just like the legacy of the music it houses.

The main design feature resembles the Luxor hotel and casino in Las Vegas, a big glass pyramid. Adorned by a lengthy statue out front that proclaims “Long Live Rock” in bright red letters, the Rock & Roll Hall of Fame is unapologetic about its presence. A liberal use of black and red decorates the interior but is overshadowed by the extravagance of the museum’s artifacts.

Decades of music memorabilia line the walls, and I found myself amazed around every corner. From famous stage outfits to the instruments used to create the music itself, rock history was everywhere. Some of my favorite pieces were Michael Jackson’s iconic sequined glove and a Rolling Stones pinball machine.

“Is that the real thing?” another visitor questioned when approaching Slash’s top hat in the Guns N’ Roses case. Of course it is, I thought. Everything here is real. Which is what makes it so unbelievable.

I was inches away from something that David Bowie wore on stage. A pane of glass distanced me from a guitar Paul McCartney played. I didn’t dare touch anything and face the wrath of the security guards but it amazed me that much of the decades-old items had held up so well.

This year’s inductees included The Cars, Nina Simone, Bon Jovi, Sister Rosetta Tharpe, The Moody Blues, and Dire Straits. If you, like me, are asking how is Bon Jovi only now getting into the Hall of Fame, the induction process is quite extensive.

Necessary talent included, artists only become eligible 25 years after their first commercial recording is released. According the the Hall of Fame’s website, “Ballots are then sent to more than 900 historians, members of the music industry and artists—including every living Rock Hall inductee—and the five performers receiving the most votes become that year’s induction class.”

While making it alongside some of music’s greatest legends may seem like an unachievable fate, it is possible. Recent artists are also featured in the museum. Katy Perry’s candy cane outfit and DNCE’s Star Wars themed concert garb lie inside glass cases on the ground floor. Even bands who have played right here in Iowa City like Saint Motel are present at the Hall of Fame.

Rock and roll lives in ever-changing artists and genres and will continue to evolve as the days roll by. As the sign outside the Rock & Roll Hall of Fame dictates, Long Live Rock.