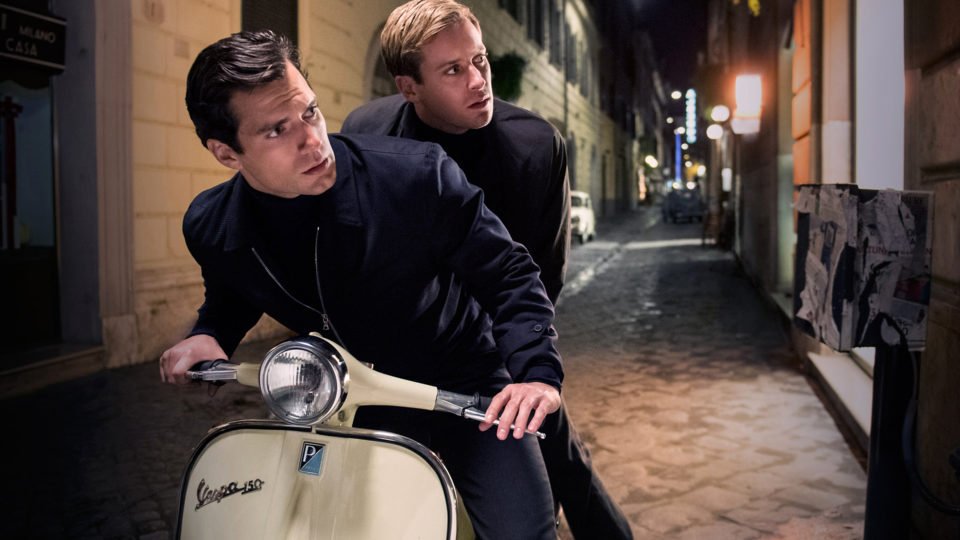 My Spotify playlists each carry a wonderfully weird meaning behind their names.

“It’s Not a Boulder” is a rock playlist inspired by one of my favorite Spongebob quotes, which is high praise considering I have been a fan of the cartoon for almost as long as I have been able to walk.

The Bee Movie sits behind the name “Barry,” a playlist of jazzy and soulful tracks.

Weird names aside, one of my favorite playlists has to be “Silver,” full of songs from movies and TV shows.

While memorable songs from The Breakfast Club and Ferris Bueller’s Day Off certainly make the list, many of the best songs on it come from the 2015 movie, The Man from U.N.C.L.E.

Based on the spy television series from the 1960’s, The Man from U.N.C.L.E. is set in Cold War-era Europe, starring Henry Cavill and Armie Hammer as rival U.S. and Soviet spies.

The film captures the nostalgic action of the original with action sequences, comedic yet dynamic characters, and eye-catching visuals. On plot and performances alone this movie is commendable, but what really stands out is its soundtrack.

Roberta Flack’s 1969 song “Compared to What” opens up the film. An effortlessly smooth bass line and piano part contrast with a bright brass section to create a complex atmosphere.

This mimics the feel of the movie, with many lighthearted moments contrasting with intense action sequences. Flack’s alto tones play with emphasis and syncopation, pushing this jazzy piece to another level.

With a multinational story, the music of The Man from U.N.C.L.E. has songs in various styles and languages. “Jimmy, Renda se” by Brazilian musician Tom Zé underscores a scene in which the two spies are tailing the criminal mastermind, Victoria Vinciguerra, portrayed by Elizabeth Debicki.

The title translated to mean “Jimmy, Surrender,” sets up the tone of Zé’s spirited lyrics, further detailed in an analysis from the Red Bull Music Academy.

Its semi-chanted Portuguese lyrics and energetic guitar riffs accompany the action sequence perfectly, while also being a great song to practice your best secret agent moves to.

Tension between Illya (Armie Hammer) and Gaby (Alicia Vikander) is perfectly captured by Solomon Burke’s “Cry to Me.”

Burke’s smooth voice brings us back to 1962, when the song was released, which happens to be during the time period the movie takes place in. A jazz-like drum part with an emphasis on cymbals gives a sultry feel to the accompaniment.

Pushing aesthetics, the song has a soulful beat that plays up the romance between the two characters while bringing a bright contrast to the fighting within the scene.

The Man from U.N.C.L.E. blends together different time periods, genres of film, and music.

While much of the soundtrack comes from older pieces from around the world, there are several original pieces written specifically for the movie by Daniel Pemberton.

Percussion is essentially a character in the film with how much it is showcased. Imitating movement and moods ranging from flirting to daring escapes, Pemberton’s arrangements carry a spy film linked to the 1960s into to the current era.

In trying to summarize how The Man from U.N.C.L.E. integrates music into its plot in an inventive and fun way, I leave you with Italian singer Peppino Gagliardi’s “Che Vuole Questa Musica Stasera.”

The ballad talks about how music reminds the singer of their love, asking through the title “Who Wants this Music Tonight?” Napoleon (Cavill) is none too concerned about the fate of Illya, but eventually saves the Soviet spy he has been forced to partner with.

Combining clashing tones of a legato Italian love song and an extensive action scene encapsulate much of what the film accomplishes through its soundtrack.

And unlike the characters of the film, no spying is necessary to see its ingenuity.