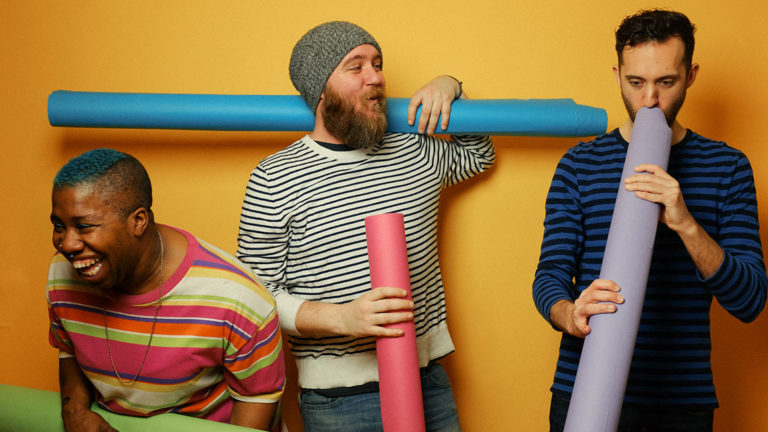 Counterfeit Madison brought the audience to their feet on Thursday, April 5th at The Mill during the 2018 Mission Creek Festival.

Sharon Udoh, Adam Hardy, and Seth Daily make up the band, originally from Columbus, Ohio. Udoh supplies extraordinary lead vocals and piano, Hardy on guitar and harmonies, with Daily rounding out the group on drums. They have released two albums, Opened and Shut in 2013 and Opposable Thumbs in 2017. Both showcase a three-person band with the talent and spirit of an entire orchestra.

Udoh’s relationship with her music, band members, and the audience all created a lively atmosphere that kept everyone’s eyes locked on the stage throughout the entire performance. Her fiery stage presence, only enhanced by her bright red hair, was chocked full of amazing moments, from several extensive piano solos to an impassioned conclusion of a song, belted out while lying on the floor between the feet of audience members. The group’s unapologetically fun and soulful sound erupted off the stage and into the ears of listeners.

Blending together different genres, tones, and tempos, Counterfeit Madison’s music transcends that which one might hear on the radio. “I Hope It’s Alright” for instance, integrates jazzy piano and heavy guitar and drum parts, while also including sections of delicate vocal harmonies between Udoh and Hardy. Each instrument is featured in various and fascinating ways, one of the most interesting being Hardy’s percussive use of the guitar in a few songs, almost mimicking the echoey sound of those little-coiled door stoppers when bent and then released.

Udoh was a powerhouse on stage, making each song unique and giving it the utmost energy. Fingers flying across the keyboard while belting out both high and low melodies, the passion she exuded throughout the night was immeasurable. While her presence during the performance was intense, the moments between songs exposed her genuine and humorous personality. After making her way into the crowd and sprawling onto the floor after a particularly upbeat song, Udoh’s first words when recuperating and coming back to the stage were “Just talk amongst yourselves,” and “I hope I didn’t spill anyone’s drink.”

Always with a smile on her face, the 37-year-old musician mentioned how Iowa culture is somewhat different from what she is used to back in Ohio. “I don’t understand what is with you people from Iowa. Everyone here is so nice.” Listing off all the accommodations and friendly interactions she has had since being in Iowa City, Udoh further connected with the audience who was rooting for her and the band from the music alone.

After a performance of insane musical skill and vivacity, the crowd wanted more. The band had already begun to pack up their instruments to make way for the group playing after them, Daily even taking one of his standing cymbals off the stage. But the audience had become so infatuated with the group that the whole back room inside The Mill chanting for one more song. With one more joke about the overly kind nature of Iowans and the go-ahead from the show director, they began an encore piece, received with uproarious applause.

The atmosphere was charged with excitement as the band went through their last song. Just as upbeat as the rest, feet tapped all around the restaurant. No one wanted the set to end. Counterfeit Madison’s live performance is unparalleled fun, but their energy is forever palpable through music, whether in person or through headphones.

One response to “Mission Creek Festival: Counterfeit Madison @ The Mill 4/5/18”