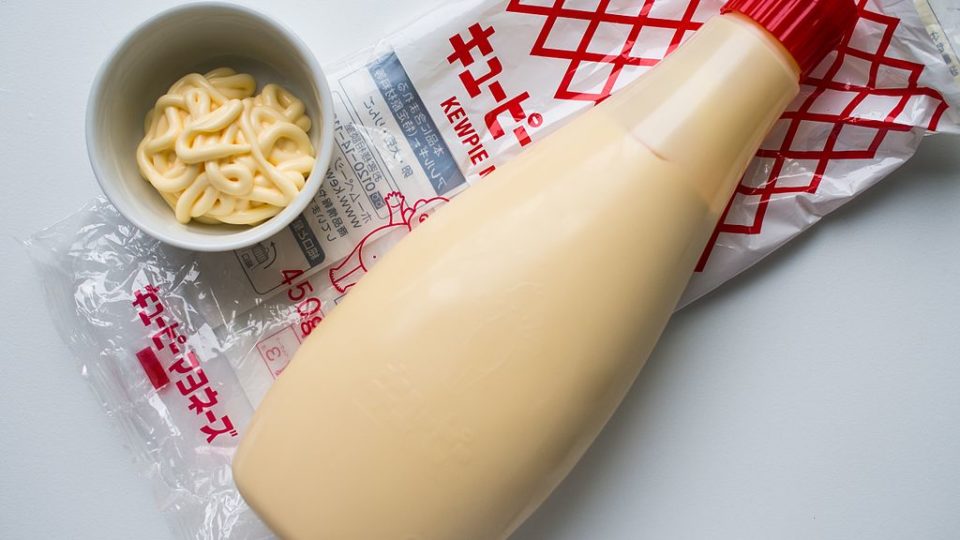 You may have wondered at one point why “mayonnaise” is included in the title of this column, especially as it has utterly no connection with matcha or manga. Was it just to pull off alliteration?

First, a bit of history: Japan’s mayomaniacs are forever indebted to Nakashima Toichiro, who introduced the

condiment in 1925 after encountering it during his student days in America. Supposedly with nutrition in mind, Toichiro gave mayonnaise his own twist, altering some of the ingredients—instead of whole eggs, he used the yolks; instead of distilled vinegar, he

substituted apple cider vinegar; he excluded water and added some trusty MSG. What Japanese consumers then received was a richer, creamier version of mayo, delivered in a very cute little jar. The logo that Toichiro chose was Kewpie, a Cupid-baby character originally created as a cartoon by Rose O’Neill. In 1958, Kewpie mayonnaise began to be delivered in very squeezable bottles with red

Gastronomes went crazy. If you assimilated all the various uses the entire population of Japan has with mayonnaise, you would reach the conclusion that mayonnaise finds its way onto and into everything. EVERYTHING.

Some of these foods have mayonnaise drizzled over them as a sort of custom—takoyaki and okonomiyaki, for example, are usually served with a multi-colored topping of ketchup, a variant of Worcestershire sauce, seaweed, fish flakes, and mayo.

You will also find mayo inside these “traditional” foods. Takoyaki, for instance, is sold in some shops with mayo as the actual filling, cream-puff style.

But perhaps one of the more jarring examples of mayo infiltration (to me at least) is that of sushi. Sushi rolls with corn-mayonnaise filling; salmon nigiri blanketed under onions, hot sauce, and mayo; or hamburger patty sushi dressed, of course, with mayonnaise, are not unusual encounters you have at kaitenzushi, which are sushi restaurants in which the sushi travels around the counter on a conveyor belt.

There is also an entire potato chip cult surrounding mayonnaise. Though I have heard of people dipping their chips in mayonnaise, they can be spared the extra labor by the variety of mayo flavored potato chips on the market. Egg and mayo, soy sauce and mayo, scallop and mayo, tuna and mayo, fish egg and mayo, plum and mayo, avocado and mayo, shrimp and mayo, mustard and mayo, and even shrimp, mustard, and mayo, all awaiting their mayo-loving consumers in delightfully colorful packages.

For those of us who feel like we have a bottomless hole in our lives, Japan just may have the answer.