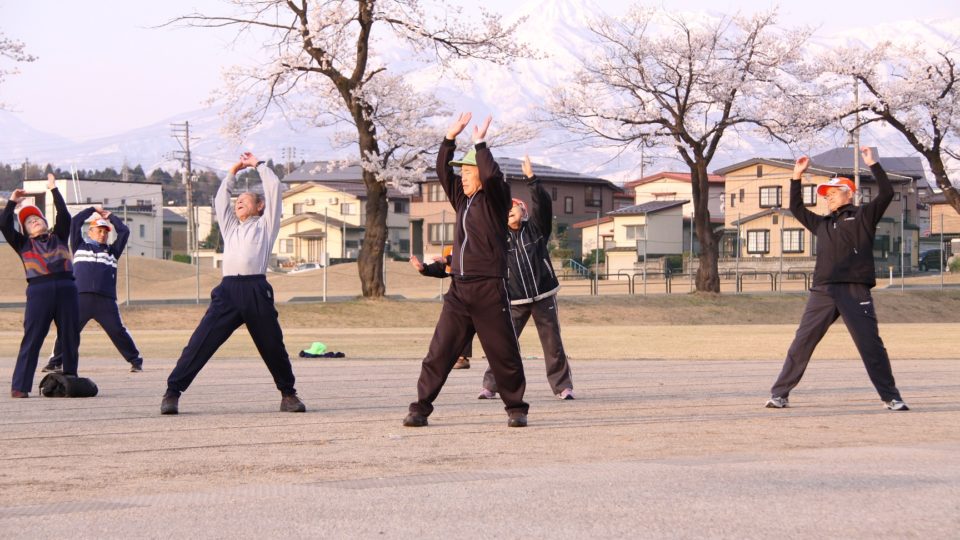 If you find yourself in Japan one morning and decide to surf the channels at 6:30 AM from the comfort of your futon, you might stumble upon a program of people in T-shirts and shorts standing against a pastel background, prancing and stretching to an upbeat piano soundtrack.

You have just had the pleasure of watching Japan’s national exercise routine, rajio taiso.

Also known as radio calisthenics, rajio taiso literally translates to “radio exercise.” Especially among the generations of the latter half of the twentieth century, it has become as synonymous with the summer vacations of your childhood as shaved ice and fireworks. It was a common thing for kids to venture out to the nearest park early in the morning, turn on the radio, and go through the three-minute routine with an instructor to the familiar tune. At the end of each session they would get a stamp on a special card, which they would submit at the end of the month of August to win prizes.

Radio calisthenics in action
Via Townnews

If you’ve ever dabbled in Japanese pop culture, you may have caught a glimpse of this exercise yourself, in a hazy morning scene in the Ghibli movie “Only Yesterday.”

So how did this exercise root itself to Japanese daily life? Its origins lie in America. Back in the twenties, the Metropolitan Life Insurance Company tried broadcasting a calisthenics routine in an effort to make Americans a bit healthier. A couple of Japanese insurance agents saw this, thought it was brilliant, and brought the idea back to Japan. The first version debuted in 1928, also serving as a commemoration of Emperor Hirohito’s coronation. The rest is history.

Kind of. After World War 2, the US banned the exercise routine, with the reasoning that it seemed too militaristic. But in the 1950s, a new version of the exercise hit the screens, and has never left since.

There are currently two “versions” of the exercise—the first version is intended for all ages and abilities, while the second, a little more advanced, is designed for working adults. The television

broadcast normally features two or more exhibitors, in addition to one sitting on a chair, who performs the modified version. The goal is for all to be able to participate.

Some companies have made this a routine for their employers as well, hoping not only to have healthier and well-circulated employees, but also to create a sense of teamwork and group effort. It’s not that unusual of a concept, either—Japanese companies are known for implementing unconventional measures to bolster a productive work environment. Some companies have instituted afternoon napping time for their employees, or giving non-smoking employees extra days off during the year to make up for time other employees have for smoke breaks.

However, rajio taiso is not enjoying the best health itself. Recent studies reveal a decline across the country in the number of children participating in their neighborhood summer rajio taiso sessions. This has been attributed to the shrinking child population, changes in social culture, and the large responsibility placed on parents. Many are concerned about this trend, with concern not only for general health, but also for the cultural role that these three minutes have borne for the past sixty years.