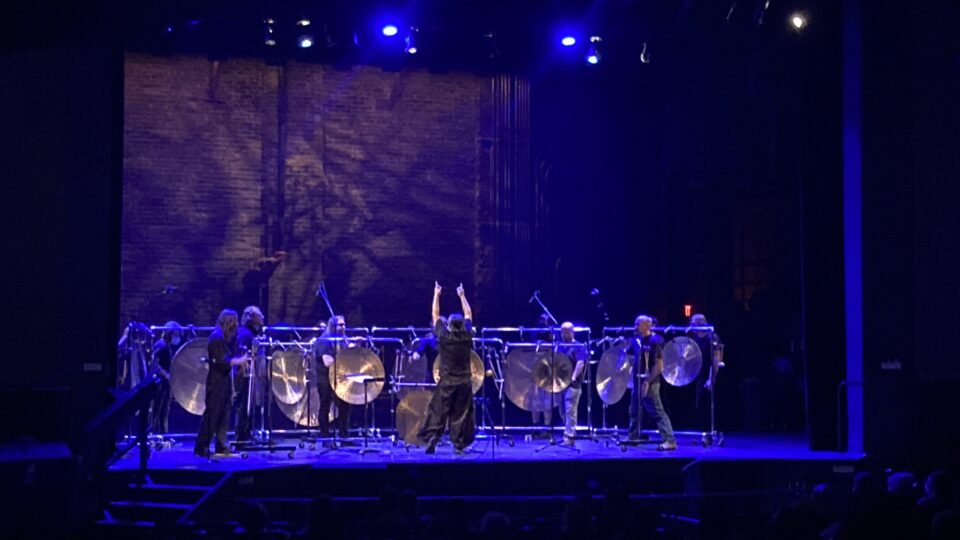 ENGLERT THEATRE – It started as a low rumble. The sound was quiet, yet it echoed through the entire theatre in such a way that you could feel it in your seat. Slowly the music grew, adding layers upon layers of sound and vibration. The combination of the music and the performers kept the audience enticed the entire show.

For the first forty minutes, Tatsuya Nakatani kept the audience engaged in a solo show. Nakatani brought a plethora of sounds out of a gong, ranging from a gentle hum that reminded me of a violin, to a brassy tune that sounded like a trumpet, to a rattle that seemed like a snake calling out a warning.

The vast range created by Nakatani’s hands forced me to feel a wide range of emotions throughout the show. At times, the music was eerie and foreboding; at others, it was sad and reminiscing. It only took the change in a bow stroke or a mallet strike to alter the mood.

It wasn’t just the sound that drew the audience in, it was the way Nakatani played the instruments. He wasn’t just some person sawing away at the gong in hopes that it sounded okay. Using such precision and grace, it appeared as though Nakatani was dancing with the instruments. He played as if he felt every vibration in his soul, and he let that vibration carry him. The emotion that he gave off as he tended to the gong was a beautiful thing to watch.

Following a fifteen-minute intermission, the show returned, this time adding a touch of home. Nakatani was joined on stage by fourteen members of the Iowa City community who had been under his instruction in preparation for the show. During this part of the show, Nakatani took on more of a director role, guiding his students through the music.

From what I could see, none of the fourteen performers had sheet music in front of them. Their eyes stayed on their instructor, only straying to focus on the bow’s movement. The group worked in unison, and while they didn’t have nearly the experience Nakatani has, the performers still created a sound worthy of the master himself.

“Good” is not a word I can use to describe such a show – it simply doesn’t cover it. “Mesmerizing,” “otherworldly,” “haunting,” or “beautiful” might work, but even then, words don’t do it justice. There’s something about the way that Nakatani plays that sticks in the back of your mind.

It’s a feeling that you can’t quite put into words.