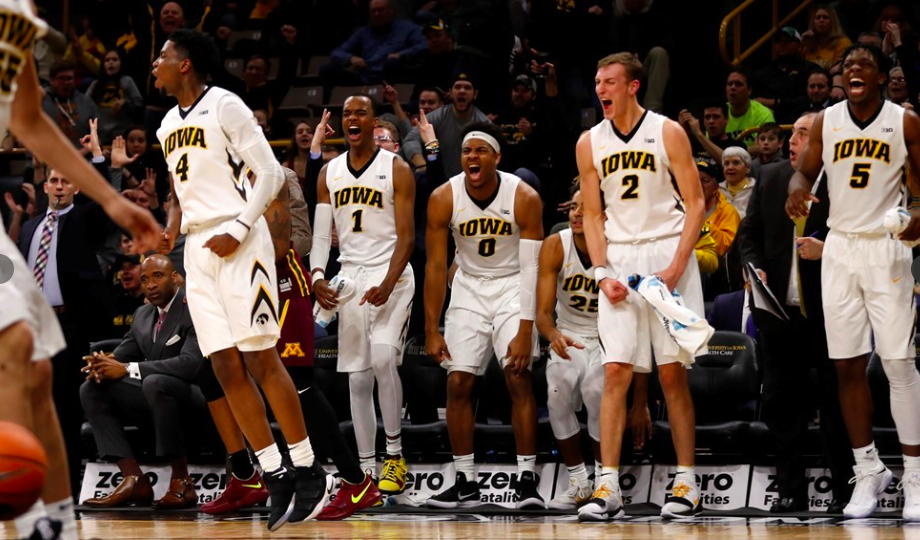 IOWA CITY, Iowa – You’d be hard pressed to find one individual, one aspect, or one play that changed the course of Tuesday night’s game.

Both Iowa and Minnesota have been reeling this season. One of these teams needed to come away with a win. The injury-laden Gophers hoped they were in line for a dire victory.

Instead, it was a collective effort from the Hawkeyes that led to a 94-80 Iowa win.

Collective and cohesive. Two words to best describe Iowa on this night. How’d the Hawkeyes manage to play what is quite possibly their cleanest game of the season?

To start, there are the individuals.

Jordan Bohannon dazzled yet again with a double-double of 20 points and 10 assists. The Iowa point guard played 48 minutes and only committed one foul and two turnovers. He also went 4-of-4 from the free throw line, putting his consecutive makes streak up to 30, just four behind Chris Street’s Iowa record.

Opposing teams throw everything they can at Bohannon, and it doesn’t seem to faze him. Bohannon is often the guy to stop the bleeding with a big, timely shot. No moment seems too large.

“He has supreme confidence in his ability to make that shot,” Fran McCaffery said. “The situation is sort of irrelevant to him, and that’s what you want.”

There’s also Tyler Cook, also with a double-double. Cook’s 17 points and 10 rebounds were huge factors that led to Jordan Murphy getting into foul trouble, trying to body up Iowa’s big man.

Okay, but what about Isaiah Moss? The streaky shooting guard was confident on Tuesday, shooting 5-of-10 from the floor and 4-of-6 from three, notching 16 points.

Yeah, it’s great to get Moss going, but there’s also Luka Garza, Nicholas Baer, and Cordell Pemsl. Each of them had 10 points as well.

Who sparked this Iowa win? Tough to say when the entire team is on their respective games.

Clearly, the offense was solid, but so too was the defensive aspect of the game. Iowa has played some of the worst defense in Division I this season, but managed to get enough stops Tuesday night.

Iowa still gave up 80 points while Minnesota was without one of their top scorers in Amir Coffey, but the effort on defense was clear and present. There have been moments this season in which that wasn’t the case.

Finally, the big plays. While Moss’s steal and breakaway dunk with 1:34 was the ultimate dagger, it wasn’t what led to the win. 94-80 sounds like Iowa controlled the game, but the two sides were pretty evenly matched.

The Hawkeyes had to weather multiple storms from the Golden Gophers, who had three separate scoring runs of seven, eight, and nine points throughout the game. Iowa stayed composed and didn’t let those turn into 15-0 runs that have plagued them multiple times this season.

Iowa also turned the ball over just eight times and made 12 three-pointers, the teams most in a Big Ten game this season.

The win was Fran McCaffery’s 400th win as a head coach, but he didn’t put much stock in himself after the game.

“All it does for me in remind me of the great players I’ve coached, the great athletic directors I’ve had,” McCaffery said. “You don’t get to 400 wins being a great coach. You get 400 wins when you have great players who are committed to one another.”

McCaffery wasn’t concerned with the distant future either. The Hawkeyes are still trying to play their way out of the bottom four of the conference to avoid having to play a Wednesday game at the Big Ten Tournament, but McCaffery is merely evaluating this team one game at a time.

“We were better tonight than we were on Saturday. That means we had some maturity,” McCaffery said. “Now we have to play a team that beat us already… let’s see if we can do that on the road. That would be a big step for us to play better than we’ve been playing before on the road.”