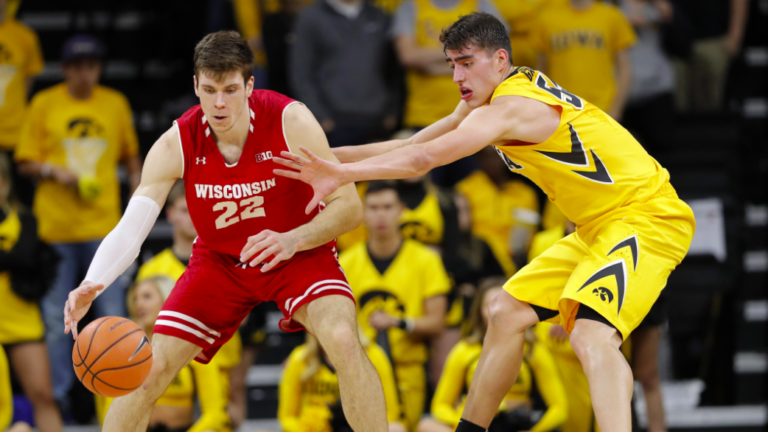 IOWA CITY, Iowa – Pressure and heightened expectations are hard to live up to. Freshmen in new universities, new states, even new parts of the country often have a difficult time reaching the standards others have set for them.

Four-star recruit Luka Garza was no exception to this in the first half of Iowa’s season. The 6’11 big man from Washington, D.C. found himself out of the starting lineup and struggling to keep up with power conference teams

That hasn’t stopped Garza from focusing on his game.

Since going for 19 points and 11 rebounds in a career-high 30 minutes in Iowa’s overtime victory at Illinois, Garza seems to have turned the corner.

“I had a couple stretches where I wasn’t as consistent, but I feel like I’m getting better at that,” Garza said after another double-double (17 points, 16 rebounds) in a win over Wisconsin. “I think playing as hard as I can is helping me through that.”

Garza has been playing as hard as any Hawkeye recently. ESPN’s Dan Dakich was on the call each of Iowa’s last two games, including the blowout loss to Purdue. Dakich praised Garza on Saturday for being the only Hawkeye playing with fight in the second half.

He gave the young center praise again on Tuesday.

Dakich isn’t the only one who has noticed Garza’s energy level. Head Coach Fran McCaffery is appreciative of the big man’s efforts.

He’s a gamer, a warrior, however you want to describe it. He’s relentless,” McCaffery said. “A lot of big guys – a lot of young big guys – they tire. When they tire, they takes possessions off, and he doesn’t do that.”

McCaffery was particularly impressed with Garza’s defensive on Tuesday when he guarded an All-American in Ethan Happ.

“I thought Luka was great. Happ’s an All-American. Luka’s a freshman,” McCaffery said. “I think he really studied him this week and moved his feet.”

McCaffery has said before that leadership can come from anyone, whether he is a senior or a freshman. Tyler Cook was a freshman leader last year. Now, Garza is stepping into that role.

“The way Luka leads is obviously with his emotion… it’s something easy too feed off of,” Cook said. “We’ve got a lot of vocal guys on the team, but I think he brings something else to the table that really fits well with this group.”

Whether he’s scouting out the next opponent in a film session or practicing new offensive moves to improve his productivity, Garza isn’t going to get complacent. Even if games are rough, his worth ethic is noticeable behind the scenes.

“Regardless of if he’s hitting shots or not, he’s playing his behind off,” Cook said. “When you get a guy like that who’s always working after practice or on off days, going to put it together.”

There’s always room for improvement, and he’s already made big strides in the early going of 2018.

In this lost season, Garza has given fans something to be proud of. Iowa fans have always held stock in the tradition of hard work.

Garza is a hard worker.