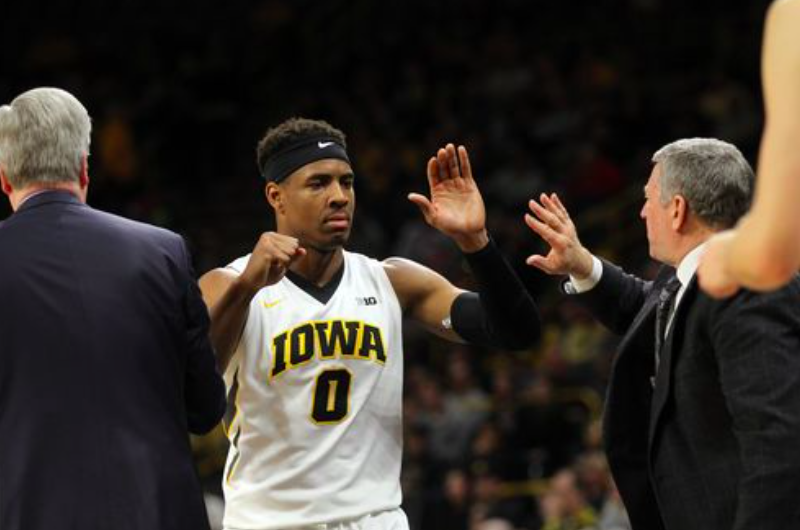 The Hawkeyes throttled the Delaware State Hornets last night 89-57 to finish up non-conference play with an 8-5 record, and they seem to have gained some momentum as they head into Big Ten Conference play.

After going through a four-game losing streak and having a complete makeover in the starting lineup, winning five in a row before facing a top-15 team in Purdue seems pretty good for the young, but talented, Hawkeyes.

“Considering where we were, yeah,” said head coach Fran McCaffery when asked if he liked where the team stands at the end of non-conference play.

Since McCaffery changed the starting lineup at Notre Dame, which included starting three true freshmen in Jordan Bohannon, Cordell Pemsl, and Isaiah Moss, the Hawkeyes are 5-2 and they have found some balance in their game. Before the change, defensive communication had been a problem and senior Peter Jok was the only player scoring consistently. That has not been the case during the current five-game winning streak.

“They’ve definitely shown signs of improvement,” McCaffery said. “We played so poorly in that stretch of games defensively, and they knew we had to be better. Then they had to figure out how to do it together.”

During the four-game skid, opponents were scoring 91 points per game against the Hawkeyes. Since, that number has gone down to 61.6.

Since becoming starters, Pemsl and Bohannon have averaged 13.6 and 11.7 PPG, which has given the team a much-needed boost offensively since freshman Tyler Cook was sidelined with a broken finger.

Before the injury, Cook was averaging 13.7 PPG and 5.3 rebounds per game.

Cook is expected to return to the lineup for the first time in three weeks against Purdue next Wednesday, although it is unclear whether or not he will be in the starting lineup. McCaffery says he will evaluate how he plays in practice over the next few days before making a decision.

“We’ll see how he does when he comes back,” McCaffery said of Cook. “Ahmad (Wagner) and Cordell have really played well together, so I’ll think it through.”

As is often the case with good players who miss time with injuries, it could take a while for Cook to get re-acclimated to playing with his teammates again, and for the team to get re-acclimated to Cook being on the floor. The team thinks the next week of practice will help them get accustomed to the change, and they don’t expect Cook to struggle at all when he returns to the lineup.

“I don’t see it changing at all,” said Wagner of the team chemistry when Cook returns. “We’re going to be just as effective as we were before, and I don’t think he’s going to miss a beat.”

Having Cook’s 6’9” frame back in the lineup will be helpful, as Purdue is one of the bigger teams Iowa will face all season. The Boilermakers have a potential first-round NBA Draft pick in 7’2” center Isaac Haas, as well as a B1G player of the year candidate in 6’9” forward Caleb Swanigan. Both players are averaging more than 14 PPG so far this season.

The Hawkeyes will have to be at their best from this point on. Only a couple of players on this young team have been through B1G play before, and they will be relied on more in the coming weeks as the freshmen get accustomed to the conference schedule.

“Our team’s been clicking lately, and we’re only going to get better from here,” Wagner said. “People say we’re young and inexperienced, but I think our team’s good and I think we can surprise a lot of people.”

It will be an interesting conference season for the Hawkeyes who are still trying to find their groove. Fans will need to keep their expectations in check as they watch this young team grow and learn on the fly, and we have to understand that the team will have to make mistakes and hit some bumps in the road if they want to keep improving.

Big Ten Conference play starts on Wednesday, December 28th as Iowa (8-5) travels to West Lafayette, Indiana to take on the #15 Purdue Boilermakers (11-2) at Mackey Arena. Game time is set for 7:30 PM central time and can be seen on Big Ten Network.