In terms of overall offense, weighted runs created plus, or wRC+ is a quality statistic to measure a player’s overall offensive performance.

Now, a lot is to be explained with this formula, so I’d recommend reading this FanGraphs post for the best clarification.

So, in this article, I will focus on the primary formula for wRC+, which goes as follows:

Here are the Frontier League’s Top 10 hitters in terms of wRC+(100 being league average): 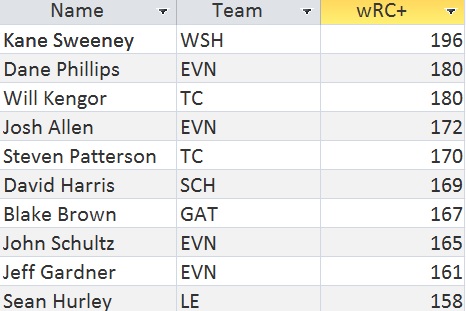 Plug the numbers in the appropriate places and Kane Sweeney has a 196 wRC+, which means that Sweeney creates runs better than 96 percent of the league. To put it in perspective, the highest wRC+ in the major leagues in 2017 was Mike Trout with a 181 wRC+.

Kane Sweeney(below) is a superb hitter, and I would not be at all surprised if he signs with a major league organization after this season.

As for the remaining nine players, each player created at least 58 percent more runs than the league average, making them very valuable offensive hitting contributors.