A hitter striking out a lot means the hitter is not a good hitter right?

Well, it depends on what one is evaluating on a given hitter.

I used to think that strikeouts greatly affected my judgement on a player. I would generally look at walk-to-strikeout ratios as a basis of determining how effective the player was at hitting. Not putting the ball in play does nothing to help a team win. My thinking differed slightly when MLB.com’s Mike Petriello mentioned on Friday’s show of “MLB Now” on MLB Network that strikeouts are not that important anymore.

There may be something to this. I tend to use Weighted-On-Base Average(wOBA) because it measures an overall player’s performance.

In the Major Leagues, for example, Rougned Odor of the Texas Rangers comes to mind as someone who fits this category. In 2016, Odor walked 29 times while striking out 155 times in 628 plate appearances. Not a good hitter based on walks and strikeouts, but his wOBA was .336, which was 18 points better than the league average in 2016.

Focusing on the Independent Frontier League, I gathered some data on the top 5 hitters who led the league in strikeouts and looked at their wOBA to determine their value in that aspect. 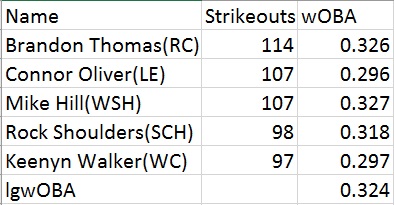 Looking at the overall league of the last two years in the Frontier League(since the league went to 12 teams in 2016), numbers have gone up in strikeouts and nearly every category that wOBA covers.

Aside from hit by pitches and doubles, the Frontier League performed more in each category in 2017 than 2016.

A batter leading the league in strikeouts does not always mean that he cannot provide value better than league average. Simply put, strikeouts are not as important as they were.