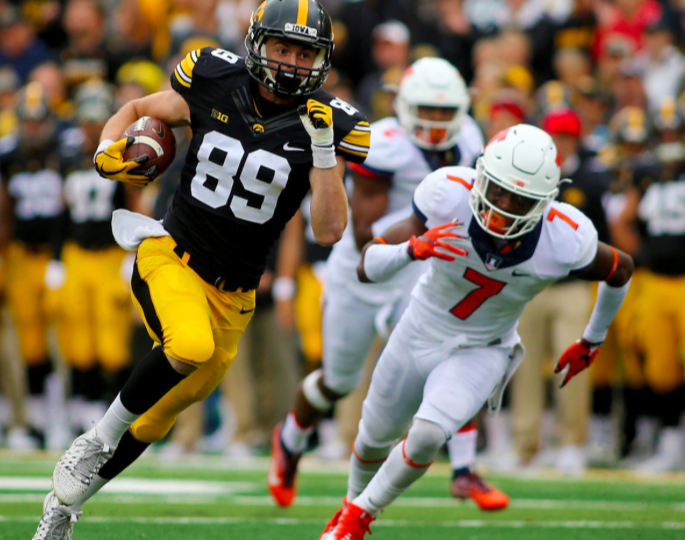 IOWA CITY – The desperation was there for the Hawkeyes and they needed to deliver. Spoiler alert, they did.

Iowa was 0-2 in Big Ten play entering Saturday and had something to prove against an Illini team that had struggled just as much, if not more than the Hawkeyes. Iowa pulled out an impressive 45-16 win thanks to a strong second half along with a good showing from the defense.

The game looked to start off well for the Hawkeyes who forced a turnover on the first play of the game, but then quickly turned the ball over themselves.

On the next possession Illinois was able to march down the field, but unable to make the Hawkeyes fully pay having to settle for a field goal early, making the score 3-0.

The very next drive, Iowa was able to use both dimensions of its offense and capped the drive off with a 5-yard touchdown catch to Nick Easley, making it 7-3 Iowa.

Sophomore quarterback Nate Stanley and Easley have become quite the duo this season. They have hooked up for three touchdowns so far, tied for the most of any of Stanley’s targets.

“He’s really molded into a great leader and has really great composure in the huddle. He never gets too high or too low and he’s a guy we can depend on,” said Easley when talking about Stanley.

Later in the half Illinois was able to capitalize on an interception thrown by Stanley and used great field position to score a touchdown tying the game at 10-10 with 6:40 left in the half.

The defense was something that had been a little suspect when looking at the rush defense. The Hawkeyes allowed 204 yards rushing on the day, but continued with their “bend don’t break” mentality, only allowing one touchdown the whole game.

In one of Iowa’s next drives they were forced into a fourth and six and were looking like they’d have to punt, but riverboat coach Ferentz opted to fake the punt, which worked to perfection, I might add. Iowa faked it to Amani Hooker who ran for 18 yards converting the first down for Iowa.

“It’s a play we’ve had in our playbook, but it has to present itself. Amani and the offensive line did a great job executing the play and we were able to covert,” said coach Ferentz when talking about the play.

Iowa and Illinois battled it out for the rest of the half and went into the locker room at halftime with the Hawkeyes holding onto a slim 17-13 lead thanks to two touchdown passes from quarterback Nate Stanley. Then it was time for the second half, where the Hawkeyes were able to impose their will on both sides of the ball.

Coming out of the half Iowa and Illinois both struggled to get the ball rolling. Iowa went three and out on their first two possessions.

Iowa desperately needed a spark and got just what they needed in the form of Brandon Snyder. Snyder who had torn his ACL just six months ago came up with the play of the game when he took a Jeff George interception 89 yards to the house making the score 24-13 Iowa.

“I am so thankful for the people that help me get back because this moment is priceless,” said Snyder when talking about the people who supported him along the way.

Illinois wouldn’t go down without a fight coming back on the next drive and scoring a touchdown to make it 24-16 late in the third quarter.

A big part of the fourth quarter was Akrum Wadley who ended the game with 115 yards rushing and two touchdowns, one coming on the ground the other in the air.

Wadley gave a lot of the credit for his success to the lineman. “Our offensive line was really able to get their blocks off and that’s what helped open up so many good running lanes for us”

Illinois receiver Louis Dorsey, who finished with 3 receptions for 75 yards, was asked what cost Illinois the game. “Just little things. I felt like they were the better team and we just played bad today.”

The Illini are now 2-3 (0-2 Big Ten) and are headed to Rutgers next week looking for their first Big Ten win of the season.

As for Iowa, they are now 4-2 on the season and 1-2 in Big Ten play heading into a bye week. This will give the Hawkeyes some time to focus on areas of improvement until the next time they come out on the field.

Following Iowa’s bye week, they head up to Evanston to face another Illinois team in the Northwestern Wildcats (2-3, 0-2). The game time has yet to be decided.