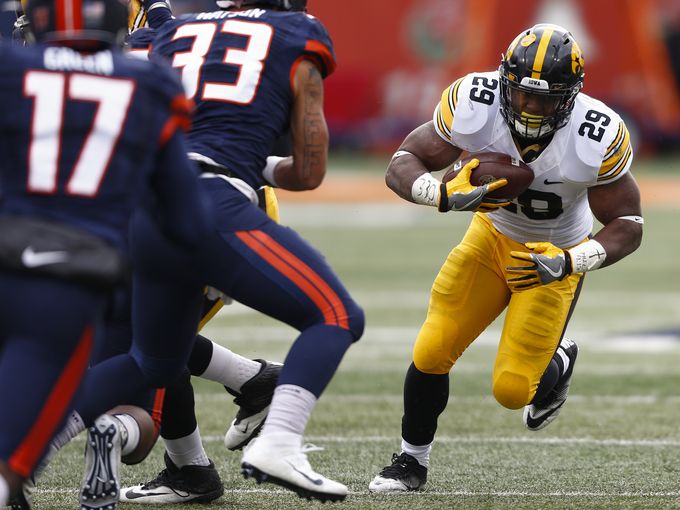 Champaign IL—Following their shocking upset of the Michigan Wolverines, the Iowa Hawkeyes traveled to take on the Illinois Fighting Illini ( 3-8,2-6). The weather, 35 degrees and wind gusts up to 28 MPH, played right into the game plan of the Hawkeyes ( 7-4, 4-3). A heavy dosage of the running attack was deployed and it did not disappoint.

Both teams started out slow resulting in a scoreless first quarter. It was the specials teams unit that helped spark the Hawkeyes. Senior receiver, Riley McCarron, put the Iowa on the board when he returned a punt 55 yards for a touchdown. From that point on, Iowa was in complete control.

LeShun Daniels had what was initially ruled as a touchdown, overturned setting the Iowa offense up at the 1-yard line. Three plays later, he punched it in for his first touchdown of the game. Daniels had a dominant day, finishing with 159 yards and two scores. He broke free for a 50 yard touchdown during the fourth quarter, which gave Iowa a 21-0 lead.

The Hawkeyes were able to move the ball on the ground all day as Akrum Wadley had 82 yards and the final Iowa touchdown. The Hawkeyes finished with 262 rushing yards on the day but their rushing attack was outshined by their defense.

After stopping Jim Harbaugh’s offense a week ago, the Hawkeyes showed glimpses of the 12-0 team last season. They held the Illinois offense to just 198 total yards and a mere 61 yards on the ground.

The 2015 Thrope award winner, Desmond King, made his presence felt throughout the game. He provided strong run support and was rarely targeted, a trend he has seen this season. Illini quarterback, Wes Lunt, decided to throw King’s way in the fourth quarter and was quickly reminded why most people avoid him. King picked off Lunt, making him 5th overall for career interceptions at Iowa.

King wasn’t the only defender to impress. True freshman, Manny Rugamba, played his corner position well for the second straight week. On the ensuing kickoff after Iowa’s third score, Rugamba ripped the ball away from Nate Echard, giving Iowa the ball at the Illinois 21 yard line.

Speaking of kickoffs, Iowa never received a kickoff in Saturday’s matchup. Kirk Ferentz elected to defend the North endzone to start the game, allowing the Fighting Illini to receive the kickoff at the start of both halves.

This was also the first time in Lovie Smith’s time at Illinois that the Illini were shutout. The Iowa defense has shown up in the last two weeks and they will look to continue their dominance in their home finale against the Nebraska Cornhuskers just six days from now.

What started as a disappointing season to many fans has turned into a respectable one. If the Hawkeyes can win their final regular season game against Nebraska, there is a good chance that Iowa fans will have the opportunity to travel to Southern California for the second straight year, only this time a few hours south in San Diego for the Holliday Bowl.