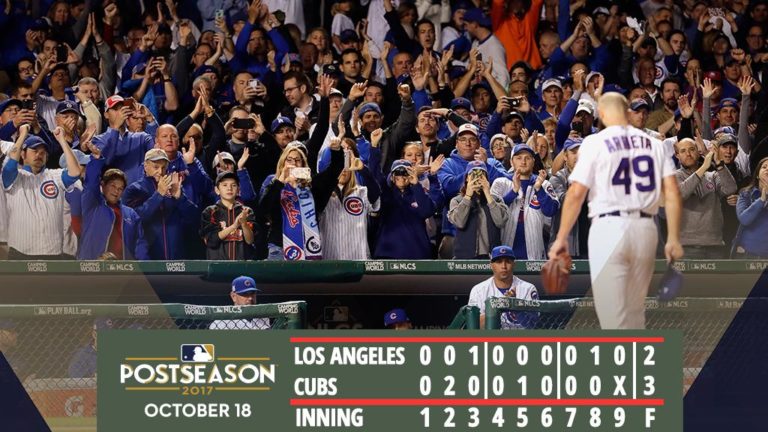 The defending National Champions in the Major Baseball League manage to survive. For now. The mounting of a comeback has begun in Chicago. In a low scoring match between the Chicago Cubs and the LA Dodgers, the Cubs would top their adversaries 3-2 in Wrigley Field.

This particular addition to the series would face off Jake Arrieta and Alex Wood. Unlike other faceoffs between the Dodgers and Cubs, this matchup would only allow runs scored off home runs. In similar fashion to Game 3, the Cubs would strike first on a second inning home run from Wilson Contreras. A 491 foot bomb into left field.

Contrasting the previous outing, Chicago would not merely score once this inning. The 437 foot belt into left by Javier Baez would further the gap. This hit is very significant for the second baseman. The end of a 0 for 20 streak slayed the demons which haunted Baez for longer than any Cubs fan would enjoy.

Despite this, the Dodgers would respond the next inning. Another homer, this one from first baseman Cody Bellinger. The score would stay at a 2-1 standstill until the fifth inning following the 378 foot blast.

Off of another pitch by Wood, Baez would once again swing for the fences. And succeed. A 380 foot solo shot into left field put the Dodgers into a 3-1 hole. In spite of their best attempts, LA would stay in the hole. An eighth inning home run by Justin Turner tightens the gap to a single run once more. Nonetheless, this would be the last run scored by either side.

The bullpens for both Los Angeles and Chicago performed well in Game 4 with both sides totaling more than 10 strikeouts a piece. The Cubs would total 12 strikeouts and the Dodgers, 11. The Dodgers would end up pulling 6 members of the bullpen onto to mound in opposition to Chicago bringing only Arrieta, Brian Duensing, and Wade Davis to close.

In the top of the ninth, Game 4 ends in dramatic fashion with a Bellinger hit turning into a Chicago double play. The Cubs stave off elimination to earn another fight. Game 5 between the Cubs and Dodgers will occur Thursday night at Wrigley Field once again. Clayton Kershaw will be on the mound for the Dodgers facing Chicago’s Jose Quintana with the first pitch at 7:08 pm CST on TBS.