I sat down with three players on the football team, Ihmir Smith-Marsette, Geno Stone, and Brandon Smith, to ask them questions about what it’s like to be a freshman on a Big Ten football team.

To view their football statistics from high school, click the links below.

When asked why they chose to play football at University of Iowa, they each had a unique reason. Ihmir was most comfortable with the school and coaches. He loved the atmosphere. Geno thought that being a Hawkeye was the best opportunity for him. Brandon admitted that it was one of the first power 5 schools to offer and that made his decision easier. All three players didn’t redshirt because the coaches believed that they were able to make an impact right off the bat.

Brandon, when asked what practice for the freshmen on the football team is like, said that it’s incredibly fatiguing because they get a lot of reps in. Geno said the same thing, along with a comment about the mental stress from learning so much. All three players said that the upperclassmen were extremely supportive and helpful.

“They are great teachers, they really take us under their wing and want us to get better”, said Geno.

I then asked all three of them what the teams culture is like. They all responded identically.

Clearly this is a theme that is discussed a lot at practice.

While being recruited to play football at multiple different schools, all three players had decisions to make. The football recruitment process was long for all of them.

Ihmir: “It was an annoying and long pr 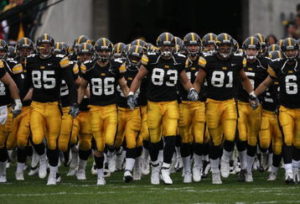 ocess, I had to make so many decisions in not a lot of time”.

Geno: “It was stressful, really stressful, but when it came down to it, I made the right decision”.

Brandon: “It was simple for me, I had a bunch of options, but I didn’t let it overwhelm me. I stayed calm, kept a cool head, and followed my instincts”.

Following the game last weekend, I asked Ihmir and Geno if they were nervous before their first game. Ihmir discussed how he was anxious, but excited to see what it’s like to play on a Big Ten team. Geno stated that it was more of a surreal moment than it was nerve-racking.

Finally, I asked all three what their game day rituals entail. All three of them listen to music and go over plays in their heads. They think about what they have to do during the game and envision themselves on the field.