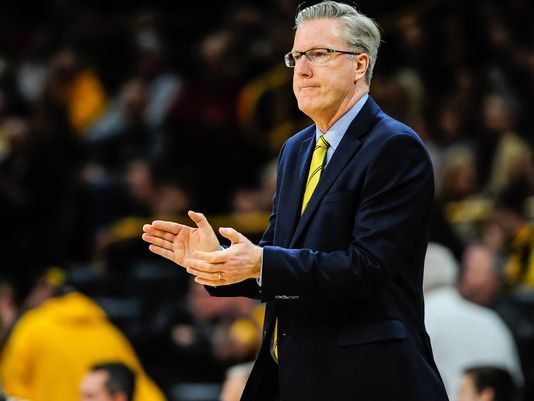 The 2017–18 season will mark the eighth season for Fran McCaffery as head coach of the Iowa Hawkeyes. In his first seven seasons, he has recorded just two wins in the Big Ten Tournament and two wins in the NCAA Tournament.

Despite this, there is plenty of excitement going around the Hawkeye basketball program as the season approaches – and McCaffery is welcoming it with open arms.

“It’s not something that ever concerns me,” McCaffery said at Monday’s Iowa men’s basketball media day press conference concerning the outside expectations. “I think you want expectation. You want your fans to be excited about your team.”

It is easy to see why Hawkeye fans and outsiders are excited about the future of the program. Iowa loses just one contributor from last year’s 19–15 team that reached the second round of the NIT. A team that relied heavily on contributions from freshmen now has more experience and more depth. McCaffery says he has never tried playing 13 different players in a rotation before, so rotations this upcoming season could be a challenge.

“I think we have to give everybody a chance to kind of establish themselves,” McCaffery said. “We have size, we have depth in the backcourt, we have length, and we have guys that can score coming off the bench.”

Last season, the growth and development of youth Hawkeye forwards Tyler Cook and Cordell Pemsl was key to the outcome of the Hawkeyes’ season. Both players made major strides of improvement over the offseason.

“He’s really matured,” McCaffery said of Cook, a 6’9” forward who 12.3 points and 5.3 rebounds a game en route to a spot on the Big Ten All-Freshman Team.

Cook seems to hold that opinion of himself, too.

The Hawkeyes would benefit greatly from a step forward from Cook, who already established himself as the Hawkeyes’ best big man last season. Fortunately, he will have more help this season. Cordell Pemsl, also a sophomore, made strides to improve his physique this offseason, a move he believes will help him become more agile and more active down low.

Pemsl says he strove to drink a gallon of water per day this offseason, as well as cutting out sodas and junk foods for more healthier options. McCaffery said he weighed in at 235 pounds, as opposed to the 256 he weighed a year.

“My strength hasn’t gone down at all. I feel great,” Pemsl said. “I’m able to spread the floor a little bit, open up shots for other people as well.”

The ability to have more movement down low would be a coup for the Hawkeyes. Iowa also adds two highly touted freshmen big men – Luka Garza and Jack Nunge – who can both work the ball inside and score from outside. Both listen at 6’11”, they rank among the tallest players on the Iowa roster.

In the backcourt, it will mostly be returning faces for the Hawkeyes. Jordan Bohannon entered his freshman season as a bit of an unknown, but after a stellar first year where he sank 89 3-pointers and earned a spot alongside Cook on the Big Ten All-Freshman Team, teams will be having to game plan for him much differently defensively.

“They’re going to chase him around,” McCaffery said of Bohannon. “But they did that some as the season progressed … he’s got that relentlessness about him. He’s smart, he’s quick, he’s tough.”

McCaffery even went as far to say that Bohannon, as a high school recruit, reminded him of former NBA Most Valuable Player Stephen Curry.

“He can pull the jumper right in your face. He’s fearless. He’s got unbelievable range.”

Still listed as 6’0”, 180 pounds, Bohannon lacks some of the size of other, more physical Big Ten point guards. His shooting ability gives him the edge over some of his matchup disadvantages.

The Hawkeyes will also have a new, unfamiliar challenge to face this upcoming season, as Big Ten conference play starts in early December for the first time, as the league compensates for its conference tournament being held in New York City in early March.

“The overseas trip [to three European countries in August] helped a lot,” said sophomore guard Isaiah Moss. “Chemistry-wise, finding out who plays together well … getting together and stronger as a team.”

“We do have a tough stretch there,” said junior Nicholas Baer. “It’s something we haven’t had a chance to try out yet, but anytime you have a chance to play against Big Ten competition you’ll be excited and you’ll be ready for it.”

Baer, the reigning Big Ten Sixth Man of the Year, described perfectly the attitudes of many Hawkeye fans of the upcoming season – excited and ready for it. Iowa’s returning experience and incoming talent could lead to one of the best years in McCaffery’s tenure.