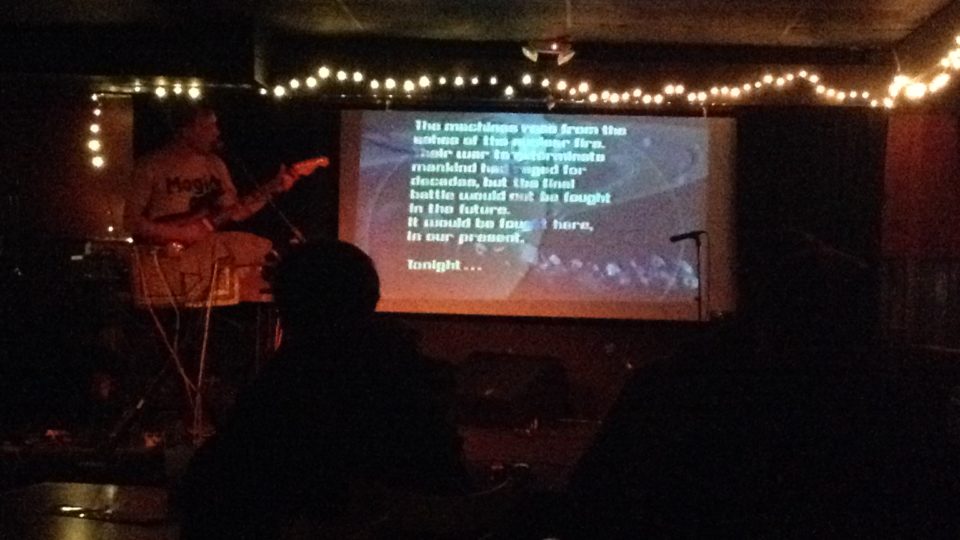 The night kicked off with Idpyramid, whose set relied on synthesizers to create an other worldly atmosphere. Their first song wasn’t an easy listen. Four notes were held out for measure after measure before they returned to the first note again to repeat the sequence. All the while, the drums kept time unenthusiastically. However, each of Idpyramid’s songs got progressively better. By the end of their set, the audience was nodding along to danceable, albeit thin, electronic music.

Koen Holtkamp took the audience on a journey through the elements. He played one continuous epic song with video accompaniment. The video started out with a flickering fire, as Holtkamp played one reverberated note. After a few minutes, the fire faded into a video of tree branches and ended with a video of rippling water. The music developed with the video, slowly becoming more complex, and finally reflected the frenetic energy of the water through song.

Next, Jenny Hval, a Norwegian musician, sang and played the synth, while a bandmate strummed (and sometimes bowed) along on his electric guitar. Hval’s voice shrieked and flitted from note to note, sounding almost ghostly at times. Her singing style is certainly unusual, calling to mind both yodeling and Régine Chassagne of Arcade Fire. Hval utilized the reverberation of her mike very well. During one song in particular, she stood a few feet back, moved her head back and forth, and sang, creating an eerie yet beautiful effect. While Hval’s songs weren’t extremely easy to digest (she herself said, “We’re not exactly Top 40—even in Norway”), they eventually built, with the help of percussion, to a satisfying ending.

Mark McGuire took the stage alone with a synthesizer, guitar, and accompanying video.

McGuire told KRUI that he put together a video that fits with his set. Rightly so. McGuire’s first song of the night was light and iridescent. The screen depicted comforting scenes of nature. It was exactly the type of song that made a listener appreciate life—something McGuire encouraged the audience to take a moment to do before he began playing.

As McGuire sang about finding truth, quotes about truth flitted across the screen. Finding truth might just be the main goal of McGuire’s music.

As he told KRUI, “I think that any artist that is creating anything that is really coming from within them and reflections of their voice, finding their way out in different ways is very inspiring… I study a lot of spirituality and philosophy and occult sciences. I draw a lot of inspiration from that. I do a lot of independent research on alternative history and looking beyond the CNN versions of what we’re given, even going back to ancient times.”

McGuire explored other concerns throughout his set. In his second song, as he sang, “Where do we go?”, pictures on the screen morphed between chilling headlines and pop culture icons, Barack Obama turned into Jay-Z, Sandy Hook turned into Beyoncé. His video gave the audience direction in interpreting his music.

While the songs he performed were all from his newest album, Along the Way, the arrangements from the show, however, can’t be found elsewhere. Upon preparing for his tour, he rearranged his songs by making them less dense and more appropriate for a stage.

“After I made the album, because most of the songs were multi-track layering with thirty, forty tracks deep and there’d be no way that I could do that live or even want to do that I live, I had to recompose the songs and rearrange them so they can be played live. That in itself is kind of reinventing the album,” he explains.

Whether intentionally or not, McGuire seemed to often take us through that process of layering the music. The synthesizer would usually lay down a background melody, to which McGuire would then layer over with other synthesized countermelodies, beats, and his guitar. The layers would build on top of each other, intertwining with the next and the last, until reaching positively explosive levels.

It became apparent early on in his set that what McGuire does best is play the guitar. He looked most comfortable plucking along and easily strummed out quick, complicated melodies and fierce, energetic chords. The moments where McGuire and his music really shone were when his guitar got to take center stage.

McGuire continues on his tour tomorrow, but you can look forward to more music from him. He’s currently working on a project where he draws inspiration from lectures and then creates music that goes along with them.

He described this process by saying, “Sometimes I’ll listen to a lecture about something and be playing along to it based and starting shift chords between what I’m naturally hearing. And then I’ll take harmonic ideas from that and go from there.” The project was inspired by his desire for truth and information. And hey, if the search for truth is what makes him play, then keep looking.

To see what other Mission Creek shows are happening this week check out the website.