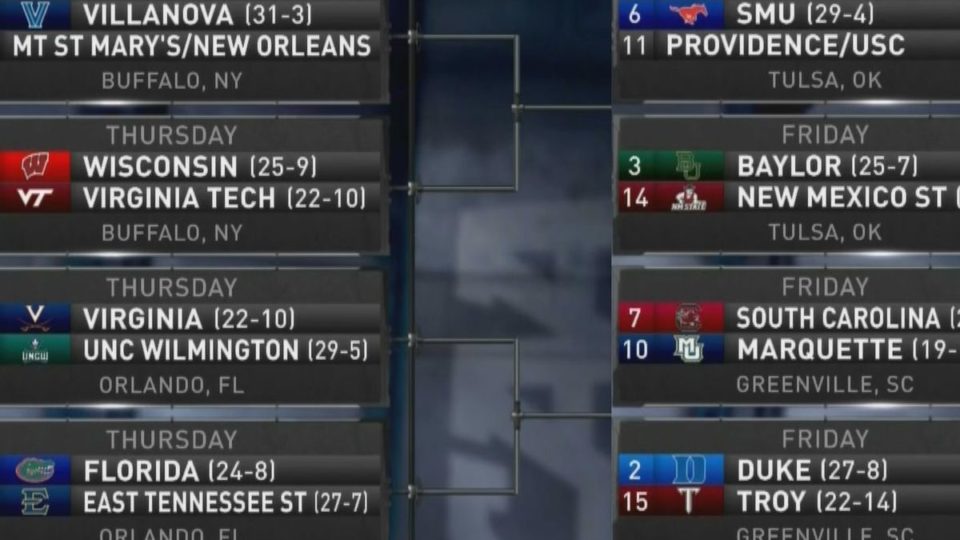 We are less than 24 hours removed from the NCAA tournament bracket reveal, which means every college basketball fan in America is searching for all the right picks. This years tournament features a lot of depth and parity while several high profile programs secured top eight overall seeds. That formula usually leads to the most entertaining tournaments, so hopefully this years tournament is a one to remember.

In order to help out any fan that has questions about their bracket, or just help making sure you know what you’re talking about at the water cooler this week, we’ll have a region by region tournament breakdown starting with the east regional.

Villanova- Jay Wright’s Wildcats enter the tournament as the number one overall seed after a 30-3 season as both the Big East regular season and conference tournament champions. Villanova’s greatest strength entering the tournament is big game experience, as they returned three starters and two key bench contributors from last season’s national championship team. The biggest question that the Wildcats have faced entering the tournament in recent seasons is can they escape the first weekend of the tourney, having lost three consecutive second round games as a #1 or #2 seed. Jay Wright’s club put those questions to rest last year by winning the title, and they look poised to make another deep run led by the Big East conference player of the Year Josh Hart.

Duke-  The Blue Devils had one of the more uneven seasons in college basketball, as coach K missed a chunk of Conference play due to back surgery and their preseason all-American was constantly in the news for all of the wrong reasons. However since coach K returned to the bench in February, the offense has come alive. Shooting guard Luke Kennard has been handed a larger role and he has answered in a big way, scoring over 20 ppg while shooting just below 45 percent from behind the arc. Throw in the emergence of future lottery pick Jayson Tatum and a more level-headed Grayson Allen, and now we have a Duke team entering the tournament as a #2 seed after just beating three top twenty teams to win the ACC tournament. Simply put; the Blue Devils are dangerous.

SMU- The Mustangs jumped on to the college basketball scene last season, but were ineligible for the NCAA tournament due to NCAA sanctions. This season, the Mustangs played like a team hungry to prove they belong, winning 26 of their last 27 games, their only loss coming on the road by two points to an impressive Cincinnati squad. As a #6 seed in the tournament, their biggest questions seem to be that they didn’t beat enough quality opponents (only 2 top 50 RPI wins, both against Cincinnati) and lack of depth, as they only use six players in their rotation. While their thin rotation is a valid concern, it’s worth pointing out that the six players they use are all really talented basketball players that can defend multiple positions and dominate in transition. Led by 6’7 Duke transfer Semi Ojeleye, the Mustangs are balanced offensively with five double digit scorers. Any team that is that difficult to guard is a tough match up in March.

Virginia- Virginia has quietly developed into an ACC powerhouse under Tony Bennet. The last three seasons the Cavaliers have been at least a #2 seed in the tournament, but have never gotten past the elite 8. While Virginia’s offensive style has become synonymous with BORING, you can’t argue that their barrage of halfcourt sets that consistently burn 25-30 seconds of clock isn’t effective and infuriating for opposing defenses.  Experience and discipline have made Virginia a hot pick to go as far as at least the sweet 16, but I’m not optimistic about their chances. The last three seasons Virginia has had NBA caliber wings in Justin Anderson and Malcolm Brogdon that could make plays if their sets broke down, this year their best playmaker is senior point guard London Perrantes. Perrantes doesn’t have nearly enough size or speed to separate from defenders off the dribble consistently enough to bail out the Cavaliers the way Brogdon or Anderson could. For that reason Virginia will probably need more than a few lucky breaks to advance past the first weekend.

UNC Wilmington- The Colonial Athletic Association champs drew Virginia in the first round after winning 29 games this season. I just highlighted Virginia’s faults at length, and UNC Wilmington can exploit those faults if they can control the tempo. They are second in the country in turnover rate and 10th in the country in scoring, with four players averaging over 12 ppg. The numbers line up, UNC Wilmington has the best chance of any double digit seed in this region of pulling off an upset or two.

SO PG Jalen Bronson, Villanova- Brunson is calm, cool and collected. He’s proven that no lights are too bright for him, expect him to bring his A game.

SR C Amile Jefferson, Duke- With Jayson Tatum playing more at the four, more has been asked out of Jefferson as rim protector. He’s responded nicely by averaging 1.7 blocks and over 8 rebounds a game, the Blue Devils need him to keep playing at high level down low.

JR F Johnathan Motley, Baylor- Motley is the leading man for the Bears, averaging nearly a double-double. His size and athleticism on both ends is a major reason that the #3 seed is as successful as they are in transition and with their press.

JR F Semi Ojeleye, SMU- With the Mustangs using such a small rotation, their legs will give quicker then the other contenders in the region. They need an all tournament type performance from Ojeleye to advance to Phoenix.

SR PG Bronson Koenig, Wisconsin- Many people were surprised to see the Badgers down at the #8 seed, but they shouldn’t be. They don’t have many offensive options, and most of their options are one dimensional. If the decorated senior wants to make one last run into late March, he has to be their go-to option, not Nigel Hayes.

Despite their lack of numbers, SMU doesn’t lack talent. They should have no problem with a play-in game winner and they should be able to take advantage of Baylor’s major turnover issues with an efficient transition game. The #4 seed Florida might not have to play a team seeded lower than #12 in the first two rounds, which gives them an advantageous first weekend schedule that I expect them to take advantage of. However, the bottom line in this regional is that Duke and Villanova are so talented that its too hard for me to believe anyone is knocking them out before the elite eight. In what could possibly the most important game of the tournament, many are expecting the red hot Blue Devils to win the region. However, despite Duke’s offensive firepower, they are vulnerable defensively especially off the dribble. Brunson and Hart are so skilled and decisive off the dribble, and I think that will be enough to give the Wildcats the edge in this one considering how tough they are defensively. Villanova will be heading back to their second straight final four.