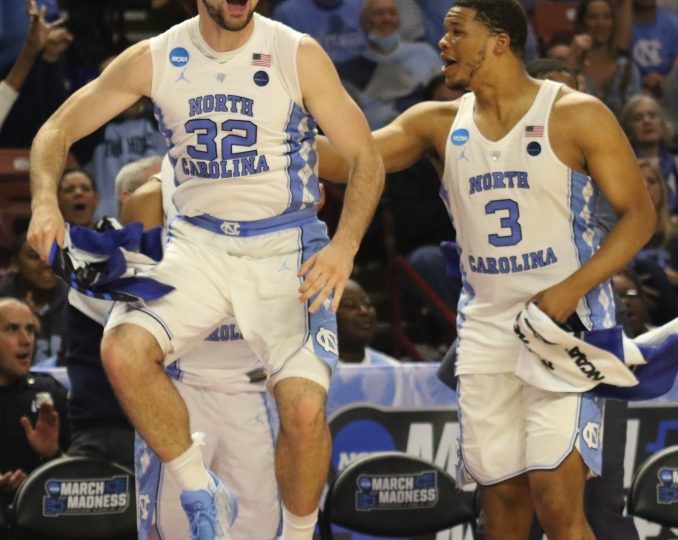 Before the championship even tips off, I am sitting here surrounded by my busted brackets, seeing exactly where things went wrong. If only (X) team would have beat (Y) then I’d be rich. An old saying. Giving ourselves reassurance that it was not our faults, rather the universe has some sort of score to settle. South Carolina in the Final Four? Three of the Four #16 Seeds had higher final four picks that South Carolina. This year of March Madness certainly wasn’t the craziest in recent memory, nor the one with the most bracket-busters early. It was rather one where most of us held out hope until the Elite Eight, but only two of our teams made it. This is not a prediction on who will win the finals. This isn’t a long epilogue about my story as a bracketeer. This is, however, a look at the games that made this March Madness one to remember. Here’s to all the broken hearts and broken TV’s, this one’s for you!

One of my three brackets had those dang Mountaineers winning the whole thing. And If they would have, I would have looked like an NCAA genius. Alas, the term “Would have” was used twice in that last sentence. A defensive battle through and through, these two teams relied on their ability to create turnovers and hit shots from outside the paint. The Bulldogs started to pull away midway through the second half, but Jevon Carter hit crucial shots to pull the Mountaineers close,

and even in the lead late. Gonzaga remained unfazed as they have been the whole year under Head Coach Mark Few, and Jordan Mathews hit the dagger 3 in the end. It was so refreshing to watch a college basketball game that relied so heavily on defense yet remained so close. Even though West Virginia out rebounded Gonzaga 41-34, They only shot 27% from the field. Yikes. That’s not a winning formula. Yet, they remained close the whole game. This was a classic nail-biter the whole way, and a true test for the Bulldogs.

The surprise team of the bracket, South Carolina, started paving their road to the final four with this win against ACC champions, Duke. This game was all about momentum. Duke had a 30-23 lead at halftime. Grayson Allen was leading his Blue Devils as to what seemed like a certain sweet sixteen bid, until Sindarius Thornwell got hot in the second half, leading a 65 point surge against the Blue Devils with 19 points of his own. Which, is the most points allowed in a single half by a Mike Krzyzewski-led team. The swing of momentum and shooting in the second half led to a fall from grace for Duke, who had an impressive end of the season. And although the Gamecocks fell to the aforementioned Bulldogs, their run was a true testament as to how unexpected the month of March can really be.

The #11 Musketeers were the cinderella story of this year. They beat #6 Maryland and then went on to vaporize #3 Florida State. After those two tests of strength, Xavier met against the #2 Wildcats, who were favorites to not only win the game, but make it to the final four. This game, like most on this list, was close until the bitter end. Trevon Bluiett led Xavier with 25 points and was 9/17 from the field. But what made this game so interesting to watch were the final 45 seconds. Where Sean O’mara got one of the most beautiful passes I have ever seen to score down low to put the Musketeers up by two. After a missed shot and 20 seconds off the clock, O’Mara had the chance to be the hero once more, by

going to the line to put Xavier up by 4 and end the game. He, however, failed to make his first and only free throw, giving Arizona a chance to score. After passes galore from the Wildcats, Allonzo Trier missed his last shot of the tournament, propelling #11 Xavier to the Elite Eight. It was a crazy one to watch, and a bracket-buster for sure.

It what was arguably the most exciting last 3 minutes of the tournament, the Wisconsin Badgers and Florida Gators matched up in a sweet sixteen game that will not be soon forgotten. After a pretty even 1st half, both teams seemed to be in a good position to take the reins and lead the game away from the other team. Florida was that team. They came out with a high-energy attack that left Virginia in the dust in their Round of 32 victory. Playing fast, smart basketball is what Florida does best. Up 68-56 with 5 minutes to go is almost always a death sentence. Not for the Badgers. Creating turnovers and capitalizing on them was Wisconsin’s way of letting the world that they’re still kicking, and not going down without a fight. Zak Showalter became the hero for the entire state of Wisconsin after his incredibly awkward 3-point shot with 3 seconds left in the game. Sending the what was sure to be over game into overtime.

There, Wisconsin rode the momentum given to them by Showalter and jumped ahead. With the score being 80-75 with one minute left, the Gators seemed all but finished. But, they call it March Madness for a reason. Just like the Badgers before them, the Gators capitalized on Badger mistakes, bringing the game within 2 with a few seconds to go. And, like Zak Showalter before him, Chris Chiozza hit his mark at the buzzer. Forever enshrining himself in Gainesville basketball legend.

Excitement comes in the strangest of forms

Thinking about March Madness is well, maddening. The odds of a perfect bracket are so astronomically improbable, you might as well figure yourself a football playing king in space. With a mustache. Picking teams that you are likely not connected to in any way aside from, “I need the Tar Heels to win because Janice from Accounting has the Wildcats winning. And I want Janice’s money.” The typical affair. And these picks make our heads hurt when they lose, or our hearts light when the win. It’s all about being alive and experiencing the wonder of sport. Being a fan even if it is only for one month. And if this year taught us anything, the Madness won’t stop anytime soon.