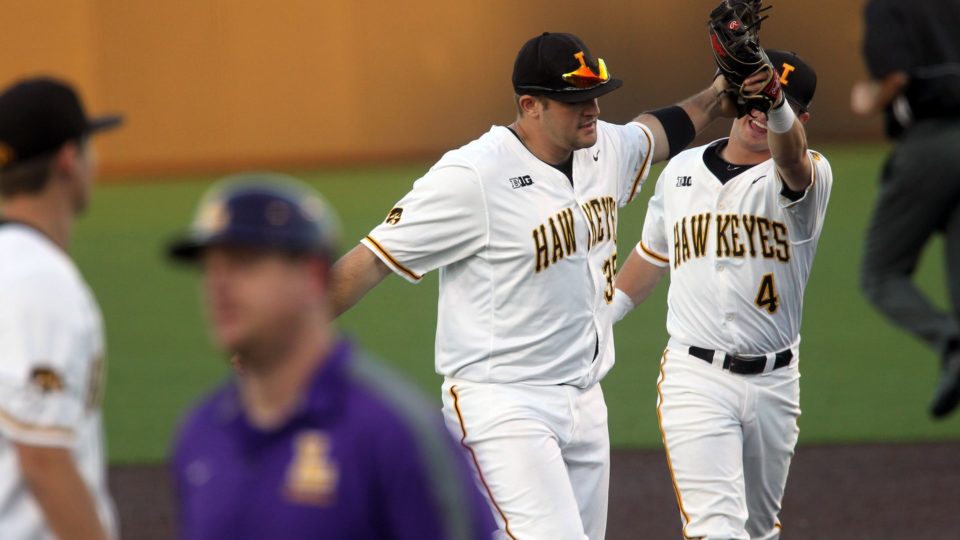 IOWA CITY, Iowa – A powerful start for the Hawkeyes in their surprise home opener began to show promise for a young Hawkeyes team.

The game started off strong for the Hawkeyes as they began the game off with a bang. After a single by Iowa senior Mason McCoy, two wild pitches, and two walks, the Hawkeyes quickly found themselves with bases loaded for third baseman Matt Hoeg.

Hoeg promptly responded with a stand up triple knocking in all 3 men on base after barely squeezing the hit in the right field line. Allowing for the Hawks to get out ahead early.

After that, Iowa never gave up the momentum.

The very next inning, Iowa proceeded to score two more runs off of another bases loaded scenario. After a fielding error by Loras allowed McCoy to get on base and continue the inning, with Sophomore Robert Neustrom following with a single.

This time it was first baseman Jake Adam with a chance to bat in the runs. He singled to left field, allowing for Tyler Cropley to score. Then DH Austin Guzzo batted in another run letting the Hawks get a 5-0 lead at the end of the second.

However, the offense was not the only side playing well for Iowa. The Hawkeyes defense looked strong early with  Freshman Grant Judkins making his debut start for the Hawkeyes, giving up only one hit with four strike outs over his three innings pitched. He was helped by a great jumping catch from Adams to end the top of the second. Followed by Kyle Shimp pitching 3 K’s in his two innings pitched.

Going into tonight, Iowa manager Rick Heller wanted to get more guys experience, he ended up doing exactly that by having four relief pitchers finishing the game with an inning each. Combining for 8 strikeouts, and giving up only one run in the 7th. Also bringing in four pinch hitters in the final 3 innings.

Iowa would end up scoring three more runs to finish with a score of 8-1, making Iowa (2-2) on the season.

Iowa will head down to Hoover, Alabama over the weekend for the Hoover Classic. First facing Alabama State on Friday and Saturday, and ending off the weekend against Morehead State on Sunday.

Iowa’s next home game will be on March 7th, against Northern Illinois at Banks Field.