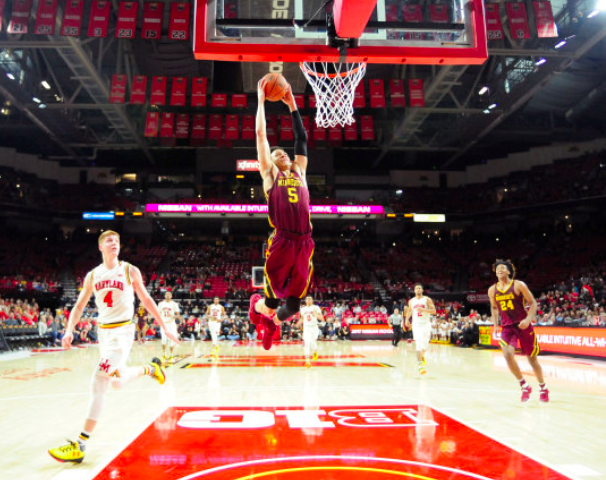 IOWA CITY, Iowa – It’s almost time for March Madness, but for some teams, the madness has already begun.

According to ESPN Bracketologist Joe Lunardi, seven Big Ten teams are currently in the field of 68 for the NCAA Men’s Basketball Tournament. That is second only to the Atlantic Coast Conference (ACC) who boasts ten as of Feb. 23.

For much of the season, the Big Ten has not been given a whole lot of national respect.

On Feb. 11, the NCAA Selection Committee released their first ever mid-season top-16 bracket to give fans a sneak peak of where teams were stacking up. Not one team from the Big Ten was listed in the bracket, despite having two teams (Wisconsin and Purdue) in the top 16 of the AP poll at the time.

Since then, conference play has picked up and upsets are becoming more likely. Minnesota has almost single-handedly brought the Big Ten back into the picture thanks to their current six-game winning streak. They are now one of three Big Ten teams listed as locks for the tournament, this according to ESPN’s Eamonn Brennan.

That means that for four of the seven teams currently in the field, and one that is still on the outside looking in, there is some work yet to be done.

Here’s a guide for how the Big Ten fairs as of now and what teams not considered locks need to do to find their way into the dance:

It seems kind of absurd that a team who has been in the AP Top-25 for the last six weeks isn’t a lock to make the tournament, but that’s just how it is. The Terps have been hanging around the top of the league without ever really getting that statement win needed to solidify themselves as being legit. Their best two wins have both come on the road. One was at Minnesota before the Gophers caught fire, and the other at Northwestern who was without leading-scorer Scottie Lindsey. Currently on a two-game losing streak, they’ve lost four of their last six and are slowing down at the wrong time. However, their final three games of the regular season (vs. Iowa, @ Rutgers, vs. Michigan State) should result in wins. If Melo Trimble keeps shooting like he has been recently and the Terps win out, they should find themselves comfortably in the NCAA Tournament.

The boys in purple are eyeing the school’s first ever appearance in the NCAA Tournament, but the team has hit a rough patch as the season winds down.  After starting conference play 7-2, the Wildcats have lost four of their last six, and were without their leading scorer Scottie Lindsey for a significant chunk of that skid. They did beat Wisconsin in Madison during that time without Lindsey, and that win alone may be enough to elicit them getting an at-large bid. Two of their final three games are at home (Michigan, Purdue), and their one road game is at Indiana, who has lost seven of their last eight. Not the easiest schedule for the Wildcats to finish the regular season, but if they can win one of them and finish above .500 in conference play, that should be enough to punch their first ticket to the big dance.

This season hasn’t gone as smoothly for the Spartans as they might have liked, but they’re still clinging to seat at the tournament table. Currently listed as one of Joe Lunardi’s “Last Four Byes,” there is little room for Sparty to falter as the season closes. Their tough non-conference schedule they always play is a plus for them, but they have very few good wins outside of East Lansing. In conference play, their longest winning streak was three games, which is true for their longest losing streak as well. You know what you’re going to get each night from Miles Bridges and his counterparts, and that eliminates any uncertainty the committee may have about the Spartans. Two of their final three games are against ranked opponents, including a home game against Wisconsin this weekend. If Sparty can find a way to beat the Badgers or win in College Park, Maryland in the season finale, that should be enough to give them the nod in the tournament.

The Wolverines have flown under the radar for most of this Big Ten season, but they’ve managed to do enough to be in the tournament as of now. Only one loss on the season to teams outside the RPI top 100, and that was an overtime defeat in Iowa City to the Hawkeyes (RPI: 112) in the Wolverines’ conference opener. Michigan sits just outside the top 50 in RPI, and has only gone 3-7 against the top 50 this season. But like their in-state rivals, the difficult schedule gives them brownie points for trying to compete with some of the top teams in the country. Five of their seven RPI top-50 losses came on the road, too. Derrick Walton, Jr. and company have struggled when away from Ann Arbor this season, and they will have to play two road games to finish out the season at Northwestern and Nebraska. This weekend, they host Purdue, which is a tough way to spend your final day in the Crisler Center before packing for the road. The Wolverines need to finish with at least one win in the stretch to maintain their positioning in the tournament, but a three-game skid could put them on the wrong side of the bubble.

Even though they’ve lost seven of their last eight and are second to last in the conference, the Hoosiers remain one of Joe Lunardi’s “Next Four Out” teams. Injuries have plagued Indiana after their season started out with so much promise. They beat Kansas in the season opener and North Carolina just a few games later. Both of those teams have legitimate chances of being 1-seeds in the tournament. However, the season shifted when they lost OG Anunoby for the season after knee surgery and missing James Blackmon, Jr. for an important four-game stretch didn’t help either. Playing 11 games versus the RPI top-50 helps their cause, but losing eight of them hurts. They also have two losses to teams outside of the RPI top-100 in Iowa and Indiana University-Purdue University For Wayne (RPI: 176). Despite the downward trend, the early success has been enough to keep them on the bubble. They likely will need to win at least two of their final three regular season games (vs. Northwestern, @ Purdue, @ Ohio State) and win at least one Big Ten tournament game if they want any chance of sneaking into the field of 68.