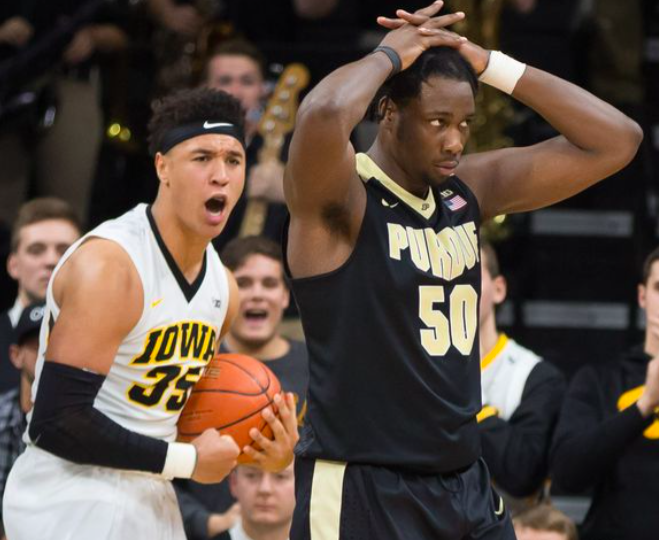 IOWA CITY, Iowa – Just two weeks ago, the Hawkeyes and Boilermakers hit the hardwood to open up Big Ten conference play at Purdue’s Mackey Arena. Then-15th-ranked Purdue took it to the young Hawkeyes, dominating them for an easy 89-67 victory.

This time, the series shifted to Iowa City, and it didn’t look like the game was played between the same two teams.

In an instant classic that could change the direction of the Hawkeyes’ season, the lead changed 20 times and every big shot was followed by an even bigger one.

After the first half went back and forth, Purdue took a nine-point lead into halftime after a 6-0 run, but the young Hawkeyes were not fazed. A 5-0 Iowa run started the second half, and the team showed everyone in Carver-Hawkeye Arena that they had matured since the last time they played the Boilermakers.

“When you go through what we went through (at Purdue), you have to learn from it,” said Iowa’s Head Coach Fran McCaffery. “Sometimes you just have to learn what playing on the road in the Big Ten is like, and then you go back to work. You grow, and you figure it out.”

The Hawkeyes did figure it out, and they did it as a team. The team recorded 22 total assists, 11 in each half, and nearly all of them came from their leaders, senior Peter Jok and freshman point guard Jordan Bohannon.

Jok lead this young team once again in scoring with 29 points on 11-of-19 shooting, but he also added six rebounds and a career-high eight assists. Bohannon also had a career-high nine assists compared to just one turnover in a team-high 36 minutes.

“My game plan was to come out and try to get everybody else open shots,” said Jok after the game. “The team did a great job of finishing.”

Jok is known for his shooting ability, but his unselfish play in his senior season has aided in the development of the team’s young core. His ability to be a leader by example has led to some high praise from his head coach.

“I thought he was really special tonight,” said McCaffery of Jok’s performance. “He just gets how everything fits, and he’s making it easier for everybody else, which is what you want your senior captain to do.”

Even though Jok put up a game-high 29 points, the game was not won on the perimeter. Instead, Iowa took the challenge of Purdue’s big men and faced it head on.

Purdue has a post presence unlike any other team in the Big Ten with 6’9 Caleb Swanigan and 7’2 Isaac Haas playing down low, but Iowa’s young big men rose to the occasion last night.

Iowa registered 40 points in the paint compared to Purdue’s 20, something that is not easy to do against a team with Purdue’s size. The Hawkeyes also outrebounded the Boilermakers 35 to 28 after allowing 37 boards in West Lafayette.

Freshman forward Tyler Cook was second on the team in points with 16 on 7-of-10 shooting. He also contributed six rebounds and his defense on Swanigan never allowed the B1G Player of the Year candidate to fully settle in and get comfortable.

Off the bench, Nicholas Baer continued to wow everyone with his aggressiveness and gritty play. He grabbed ten rebounds, nine of them in the second half, and blocked a would-be dunk from the 7’2 Haas that brought the crowd at CHA to their feet.

Twice the Hawkeyes forced jump balls with Haas, and twice two big bodies hit the floor hard. In the first half, it was Cordell Pemsl who took Haas to the floor with a takedown Iowa wrestling coach Tom Brands would have been proud of. In the second half, Haas was taken to the ground again, this time by Ryan Kriener.

The freshman from Spirit Lake was only averaging 4.4 minutes per game and had not checked in to a conference game yet this season, but he played eight impactful minutes late in the game.

Kriener checked in midway through the second half and picked up a quick foul on Haas, but the freshman responded by scoring six of the teams next eight points that helped the Hawkeyes tie the game for the first time in the half.

“M-V-P! M-V-P!” Tyler Cook chanted as the two made their way into their post game media session.

For the second straight game, McCaffery used a player off the bench to spark a rally and give the team a boost when they needed it. First, it was Dom Uhl against Rutgers. On Thursday night, it was Ryan Kriener.

“(He’s) been waiting for a chance, and he’s earned that chance,” McCaffery said of Kriener’s performance. “I couldn’t be prouder of him.”

“When you get your shot you just have to go and make the most it,” said Kriener. “I have a lot of confidence in my ability to score … but I couldn’t do that without my teammates getting me open, so credit to them.”

The Hawkeyes have now played four Big Ten games since their opening night debacle at Mackey Arena, and each game has been decided by single digits. In those games, the Hawkeyes are 3-1, with all three wins at Carver-Hawkeye Arena.

“I’m really proud of our guys and how we were able to compete tonight, said Baer following the upset of Purdue. “It’s something we’re going to have to do moving forward. Every night’s going to be a battle.”

Inexperience is no longer an excuse for this Iowa team, and they never wanted to use it as one in the first place. They’ve been through a lot already in the early going of the Big Ten season, and a signature win like this over a good Boilermakers team might just give them the confidence they need going forward. The “rebuilding year” for the Iowa program may not have to take a whole year if the team keeps playing at this level.